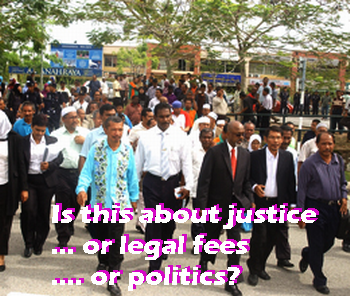 The spokesmen of Felda may not be an impressive lot to meet the information demand of the day. There is the rajin but at times, space out UMNO's Information Chief, Dato Ahmad Maslan. And there is the slowly but surely, inaudible former Minister, Tan Sri Yusof Noor.

It doesn't help their cause neither doing the dumbest thing of suing Suara Keadilan over the first wave attack to accuse Felda as bankrupt.

The poor communication strategy is unfortunate because Felda is one of the best agency in the world in it's category. It's landbank is humongously huge, million/(s) of people under it's dependency, and it's organisation is expansive and with comprehensive functionality. Not only that, it is planning to reduce dependence on plantation and for next generation/(s) to Felda settlers.

This Government agency is self sufficient, commercially viable, living without grants since 1994, and still absorb the social needs of the settlers. Yet, the balance sheet is rock solid.

The decline in cash position is a normal situation for an organisation undergoing transformation and business diversification. Felda is a truly a success story for Malaysia.

To get a detailed understanding of the background, read Syed Akbar of Outsyed the Box here.

Whether the trouble issue is allegations of Felda's insolvency, or issuance of land grant or undermarket purchase as in the recent lawsuit by 766 Felda settlers, it is all but opposition ploy. There are answers to all the grumbling.

Pakatan aims to destablise Barisan Nasional and UMNO at their safe seats. At stake in all areas involving Felda are 55 Parliamentary seats and about 100 State Assembly seats. Get the picture now?

PAS knows the political value of Felda from as far back as the 70s when they were together with UMNO in Barisan Nasional. They have been yearning for a piece of this political pie from way back during the time most of the current Felda schemes were jungles.

Felda was one of the source of disagreement between UMNO and PAS that led to the 1977 breakup. Of course, like any sore losers, PAS would groan and complain of their loss to blame it on UMNO. Is there any other way?

This story was relate to quite a few bloggers by Tan Sri Sanusi Junid. During the establishment of Felda schemes all over the country, Dato Asri Muda, the then PAS President was the Minister for Mining and land Development, I believe.

Tun Abdul Razak was a brilliant man who came up with many economic, social, political and international relation schemes, even while he was working under Tunku Abdul Rahman. Tunku hanya main kuda dan minum brandy.

UMNO was making all sorts of initiatives. When in the Federal Government, PAS was just a passenger to warm the seats. They were, like they are today, only interested to gain political mileage, expand their political influence, and using religion as their political tools.

What happen was PAS had placed their people in Felda schemes like Jerantut and in pockets all over the country including places like Serting and Jempol where the lawsuits originated from.

[Coincicently, I bumped into my friend - the PAS candidate for ADUN Serting in the past two GE - few days ago. Should have asked him about this.]

That broke a gentleman agreement between UMNO and PAS that is to not encroach into each other's political turf. UMNO had to come to term that they cannot be together under the same BN umbrella.

PAS was embarassed and used the Kelantan debacle as excuse to quit BN. But forever laying blame on UMNO. If Nik Aziz's heart is not filled with hatred, he would own up.

So, all these "do but blame other" tricks being employed today - Khalid Ibrahim's Selangorgate, Chua Jui Meng's Sultan faced banner, Tony Pua's bullet note and endless blamer Lim Guan Eng, Anwar, Khalid and all Pakatan leaders - is nothing new.

Before moving to the so-called grouse by the 766 settlers suing Felda, read this opposition slanted news portal, Free Malaysia Today below:

SEREMBAN: A group of 766 settlers from Felda Serting and Felda Raja Alias from Jempol, Negeri Sembilan filed a suit against Felda and Felda Palm Industries Sdn Bhd for fraud and breach of trust and claiming losses of more than RM200 million at the Seremban 2 Court complex this morning.

They are represented by lawyer R Sivarasa, assisted by Latheefa Koya and T Kumar. Also present was the representative of the settlers Karip Mohd Salleh.

Speaking to reporters at a presss conference in the compound of the Seremban 2 High Court, Sivarasa, who is also the Subang MP and PKR vice president, alleged that the settlers were paid at a lower rate of the oil palm extraction grade (Kadar Perahan Gred or KPG) averaging at 18.9 percent for the last 15 years.

"The settlers suspected something was amiss when they realised that they could not match the recommended rate from the Malaysian Palm Oil Board which was higher at 22 percent.

"In March and July this year, the settlers sent their fruit yields samples to two different independent laboratories to assess the actual rate of the KPG and the results showed a much higher rate of 24 percent and 25.5 percent.

"This is a 6 to 6.5 percent more than what the rate Felda Palm Industries Sdn Bhd used," said Sivarasa to which the crowd responded with 'Felda Penipu'.

According to Sivarasa, based on the six percent losses of the fruits yield on the oil palm extraction grade for the year 2008, each Felda settlers from the group 766 faced losses amounted to RM20,039.05 each for the year 2008 alone.

"We are claiming for the losses from year 1995 till 2010 with four percent interest annually. So the accumulative losses for a period of 15 years will be more than RM200 million," explained Sivarasa to cheers from a 300 capacity crowd.

The settlers are also claiming examplary damages and eight percent of the total losses and damages.

More than 300 of the affected settlers were present in the vicinity of the court to show their solidarity.

The interesting thing here is the role of Anak, a so-called Felda based NGO with membership limited to few Felda settlers in Johor. It's President, Mazlan Aliman was a second generation Johor Felda settler. He was jobless, uneducation, and living as a PAS political rally speaker. There lies a credibility issue.

Mazlan has been spreading risalah througout Felda to drum up anger and get support. But still those that came and making issues are merely PAS members. Remember those Dato Asri placed all over the country. We managed to get copies of the risalah and it's allegations. Click the image to read.

The reports received was that the 766 peneroka had to pay one off RM500 each to the legal team and that adds up to RM383,000. The arrangement with the lawyers include as follows:

Noticably, the 300 attending the lawsuit filing were PAS leaders and members and lawyers are PKR Vice President and Media Liaison Officer.

This remind us of Rockybru's posting of his column in the Malay Mail here and article Separation of layers and politics. What credibility can we give to this claim if opposition politicians and lawyers are involved.

Is it truly for justice? Or it is about handsome legal fees and commission? Or it boils back to politics for the 100 Parliament seats?