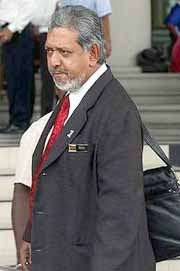 Most of yesterday's newspaper frontpage was about the corruption charge on Tourism Malaysia Director-General Datuk Mirza Mohammad Taiyab.

Such coverage given to Mirza was because it was his second charge after being acquited from the first charge of accepting a sponsored dental implant treatment worth RM13,860.

The person instructing the dentist to not accept his payment and bill him had owned up.

Otherwise, he would have been victimsed for being in the way of the then Minister of Tourism, Dato Azalina Said. Read a past posting here.

Mirza is a man with a clean reputation. Neither any Ministry's staff has any complain against him nor is there any grumbling against him for corruption or abuse of power.

He is known as a straight arrow to both staff and industry player.

For MACC to charge him for the second time, they must have got their investigation and proof in order. A second loss will not only embarass them but taint the name of MACC.

In court on Monday, Mirza is jointly charged with former Pempena Sdn Bhd chief operations officer Mohammad Rosly Md Selamat for criminal breach of trust involving RM888,000 on Feb 27, 2007. Both plead not guilty for the charges and the next mention date is September 6th. The details available in The Star report here.

According to the charge sheet, Mirza and Rosly was charged in their capacity as a member of the board of directors and COO of Pempena, respectively. They were accused of paying the RM888,000 to LCL Interior LCL Dubai for a project to build Restoran Malaysia Dubai but did not fulfil the necessary requirements.

In 2007, Mirza was a member of the board of Pempena, the troubled subsidiary of Tourism Ministry by virtue of being the Minsitry's director general. Mirza was also an authorised cheque signatory for Pempena.

Pempena is seen as a troubled subsidiary because the Auditor-General’s Report 2008 reported that Pempena did not generate any return on investment after some RM41.7 million was pumped in the company.

A source claimed the other side of the story is that despite Mirza's disagreement for Pempena to finance the Dubai restaurant, the Board of Director had approved.

Unwillingly he had signed the disbursement cheque. The money was squandered away by the recipient company but did not deliever the assigned work. It is believed that the company is connected to the then Tourism Minister, Dato Leo Micheal Toyad.

When Mirza was acquited from the first charge, he was reinstated to his old position. By then, neither the alleged victimer, Azalina nor her successor, Dato Micheal Toyad was there. The new Tourism Minister is MCA MP, Dato Ng Yen Yen.

Soon, he was back to his old ways to refuse instructions from the Minister, cancel Minister's plan deemed unworkable and waste, and reject any proposal or payment with any smell of corruption.

Mirza was getting on Yen Yen's nerve. At the same time, complains were piling on Yen Yen. She was suspiciously business-minded in her ministerial role.

Furthermore, she arbitrarily changed the 1Malaysia concept that had been promoted by Tourism Malaysia for decades to become more sino centric.

The same source informed that Tuesday was the closing date for TDC's worldwide advertising tender. As chairman of the tender board, Mirza had earlier disagree for the top company to be given the whole contract worth RM600 million.

Yen Yen has a son involved in the bid and their intention is for a total sapu. Mirza was getting in the Minister's way again.

Unfortunate for Mirza, it is difficult to complain against her. It is heard that she came out with the highest KPI among the Ministers.

Another reliable source claimed MACC was adamant that Mirza is not as clean as he seems. MACC officers are determined "to get him" for another charge after the first acquital.

MACC could have gone for others in their combat against corruption but still chose to charge Mirza again.

They better not lose the second time to the same person. Otherwise, it will not only be embarassing for MACC but taint their reputation.

Same source claim that Mirza is confident of winning this second charge.

Why is MACC not hauling up

1. The Lesbo former minister, Azalina? Sebab Melayu and berkuasa hence can anything she likes?

3. Ng Yen Yen? The bitch can go around spending tax payers money like her own piggy bank?

Can someone please do something?

"The same source claimed Tuesday was the closing date for TDC worldwide advertising tender. As chairman of the tender board, he did not agree for the top company to be given the whole contract worth RM600 million.

Her son is involved and their intention is for a total sapu. Mirza was getting in the Minister's way again."

HER SON is involved? Geez.. takde any Minister yg not corrupted ke in Malaysia? How shameful!

Please change your title, I totally disagree with it.
MACC is already tainted beyond repair. It cannot be be tainted anymore.

This is precisely what is happening to many government servants.

Was "instructed" by the people above.

Follow - your work will be smooth sailing, you can get many perks, easy to naik pangkat too, as long as there was no stormy weather. Even if there was one, the chances are, the storm will soon be swept away.

Not To Follow - prepare for cold storage or transfer to timbuktu, forget naik pangkat etc.

What a terrible choice to make. There more people smooth sailing in the job. Very few in the cold storage.

And here comes the BPR (then) lecturing to these people about graft etc. The "boss" was not in the lecture together.

Azalina definitely a small fry in this contrary to "naza pempena kaler biru"... pempena was already relatively broke by the time she was minister in mid 2008 so not much could have been done.

Yen Yen and her son on the other hand... big kahuna. Remember her son was also the CFO of the failed RM800million INVENTQJAYA at cyberjaya. So much money poured in and all gone now except for a delapitated building in cyberjaya. She was the finance dep minister then. Nades and Terence should look that project up instead of dealing with small issues like the AzalesbianLina.

And Yen Yen also gave the SHANGHAI EXPO to her best buddy Grace and of course her son also... and boy did they do a BAD job. Its so embarassing even the Tourism Malaysia officers are ashamed of it. Again the Sun paperboys can easily get info on this...

I dont know if Mirza is guilty or not, it up to the courts. But he sure seems like a funny and likable man that enjoys promoting the country.

This DG is like a DIGI phone. It has to be charged frequently.

By the way, the finger seems to point to the former Minister who is not well accepted nor respected by both, staff and industry players.

MACC should probe the former Minister, rather than the DIGI phone. But, it seems that anyone who says no to absurd demands must be crucified.

Anonymous said...
This comment has been removed by a blog administrator.
5:34 PM

From some people at Tourism Malaysia, they say that the person behind all these charges and witch hunt is the current CEO, Datuk Idrus. He was an officer in TM, many years hoping to be the next DG. He failed terribly in Tourism Malaysia and was shipped out to Pempena to manage it eventually. So this is his way of getting back at the people who he felt sidelined him. Idrus even told his friends that he would make it a point to bring down the senior people at Tourism Malaysia and the former and current ministers, what ever it takes. He tells people he is merely cleaning up Pempena but actually just trying to dig for anything he can find to get the people he dislikes into trouble.

So Mirza and Rosli may just be unlucky to suffer the consequences of Datuk Idrus's anger and jealousy this time.