Ask that to Husam 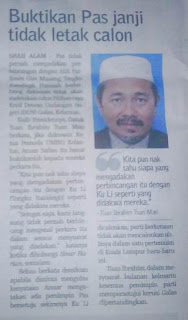 And for the sake of democrasy, UMNO should also field their candidate to give a choice to the voters.

Be done with call by Kelantan exco member Dato Takiyuddin Hasan or Zulkifli Nordin for UMNO should just give the seat to PAS.

Why should it be left to UMNO? Why not PAS, whose already with a comfortable majority in the Kelantan State Assembly?

Tuan Ibrahim also seek proof that PAS had agreed to not run if Tengku Razaleigh run. He was refering to statement by Ketua Pemuda Kelantan, Anuar Safian and not as raised by this blog here.

That request should be directed to Husam. Since the death of the late Galas assemblymen, Husam's silence is deafening.

It turns out the story about Husam promising a safe passage to Ku Li by not fielding a candidate is no more an exclusive secret. Not only yours truly knows about it, but also the Kelantan Ketua Pemuda UMNO.

In fact, this blogger got a Ku Li loyalist to confirm of Husam's several visits to meet Ku Li at his Langgak Golf residence. There are a whole list of other leaders meeting Ku Li.

Perjanjian Langgak Golf as coined by blogger RBF here can be damaging to both Husam and Nik Aziz.

RBF is the blogger Husam had sent a stalkers to serve a writ of summon to sue him. It is for an allegation he made in his blog that Husam gave timber concession to Tamrin Ghaffar.

Husam is a political figure with access to media, thus he could easily deny and brush off the allegation from a low traffic and relatively unknown blog.

The impact of the allegation on his reputation has minimal impact. The murmurs within PAS is more damaging than that.

If he feels inconvenient by the lawsuit by Khairy upon him, then he should not do onto others what he does not want others to do onto himself.

By pursuing RBF, he has created himself a relentless enemy. RBF is raising issues on Husam's Gold Dinar project and also on the offer to Ku Li. Young man like this will not stop and continue to hound him till he withdraw his suit.

RBF ridiculed Nik Aziz's statement that it is beneath royal Ku Li to run for state assembly seat. He rebutted by asking why then is Nik Aziz still running and defending his seat in Pulau Melaka?

Nik Aziz had promise to retire the moment Tun Dr Mahathir retire from his Prime Ministership but has not done so. This is eight years ago.

Comment by his press Secretary must have his concurrence. Thus, his current view on Ku Li is seen as ridiculous and inconsistent.

RBF also questioned Husam's silence on this issue. He believes Husam would not make such offer without the concurrent of Nik Aziz.

By that, RB+F feels that if PAS insist on fielding their candidate as said by Tuan Ibrahim, it will showcase to the whole of Malaysia that Nik Aziz is a habitual liar and unbecoming of a Spiritual leader of PAS.

And PAS will branded as a party of liars.

PAS or their supporter should not waste time trying to deny this here because this blogger have heard many PAS leaders feeling uncomfortable everytime a microphone is directed at Nik Aziz's mouth.

Tuan Ibrahim should neither waste time to demand proof nor be ridiculous to take such frivolous political exchange to court.

I need to ask anwar first.