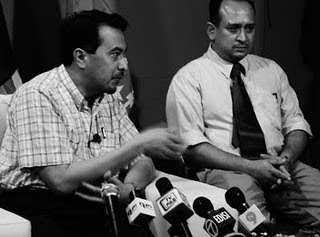 Since raising the issue of Husam's offer to Tengku Razaleigh to run for Galas and Pas promise to sit out, Nik Aziz have been giving strange statements. He claimed it is beneath Ku Li and an insult for him to run a state seat.

While browsing on some blogs, came across Kickdefella's latest posting here. An extract below:

Husam too proposed that Tengku Razaleigh be considered as BN candidate for Galas. I fully supported him at that time not knowing that twelve months later it could be considered as an insult to Tengku.

Kickdefella, who used to work with Husam, confirmed that Husam did made such an offer to Ku Li.

Taking that Kickdefella is not doing a wayang, Husam must have made that offer on Nik Aziz's instruction or if the idea was his, Nik Aziz gave his agreement. Isn't Nik Aziz's remark strange?

The Election Commission announced yesterday that the nomination date for Galas will fall on October 26th, few days after the UMNO General Assembly. Polling date will be on November 4th.

Both side is toying with their list of candidate. For PAS, they will have to see what is Ku Li's move. Basically it is not Ku Li's style to want to hold another seat.

But why is Husam making statement of PAS may consider fielding an Orang Asli candidate?

The Orang Asli is Malaysian. Why not?

But if that is the case, Husam is acknowledging the allegation by this blog and today acknowledge by Kickdefella. It is as though PAS is giving away the seat.

If an Orang Asli candidate is fielded, it will not be fair on him. His or her candidacy would be described by Kelantanis as aye denok or a sacrificial lamb.

Sacrificial lamb for what?

For PAS, it will be seen as not taking the contest seriously. It will be an insult to Ku Li, who of late, they seem to rever. Ku Li promised to appear as witness in PAS lawsuit against Federal Government for oil royalty. But to many the oil royalty issue should be seen as a seperate issue.

Not only PAS wants Kelantan to benefit from the oil royalty, even this blogger agree with PAS. What has been agreed in principle should be honoured?

Another argument is, if DAP Penang can benefit from insfrastructure spending by Federal Government to build second bridge, why not Kelantan get some money for themselves? After all, it is a state with more than 90% Malay.

UMNO leaders should not forget the struggle and purpose of UMNO that is to champion and empower the Malays. It doesn't say only UMNO Malays. Otherwise UMNO can lose out the claim to win back the heart of Malay voters?

Another idiotic words coming out from PAS, first was Khalid Samad was to ask Perkasa to run in Galas. Are you freaking stupid? Are you not listening? Perkasa is an NGO. Hope Perkasa ignore such irritating stupidity.

With oil royalty out of the equation, opposition UMNO should just bomb away now. What are they waiting for?

Ku Li will be returning Saturday morning. Heard Tok Pa is gathering people to receive him. That is something ku Li is not used too for a long time. There will be a press conference.

i think the statement where PAS says they want to nominate an orang asli is to insult ku li. basically, PAS wants to project that ku li's standard to fight is only with an orang asli. by nature kelantanese do practice a bit of caste system where you have the niks, wans, tuans, tengkus etc. other states have this too but they dont see it as a class, just a surname. if u stay in a modern kampung, some will look down on orang darat. if u stay in a not so-modern kampung, you look down on orang bukit.

then u have the fair ones vs the dark ones, you also have bara (with arab blood). there's a whole lot of caste system in k'tan and using this psyche, PAS is saying that ku li is only good to go against their orang asli candidate.

i'm not surprised by Nik Aziz's statement coz of late the so called Tuan Guru more often than not make conflicting remarks.