Below is the video of Agendadaily's Nor Hasilah Ismail interview with Dato Seri Utama Dr Rais Yatim yesterday at the UMNO General Assembly at Putra World Trade Centre (PWTC):

Rocky responded with the same call on Rais to make an MACC report. Read the Agendadaily report here.

Rais made a police report on a personal capacity. But no MCMC report on his personal basis was made. It is believed that he directly instructed MCMC to investigate.

The Malay Mail today reported Rais son, Dino is involved in a telco civil lawsuit. Read the full report below: 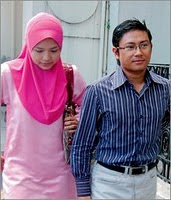 KUALA LUMPUR: The Civil High Court here this morning was the setting for a case involving a telecommunications company, where the son of a minister in charge of the industry, was mentioned.

The affidavit had stated that in January this year, Looh, a shareholder and director with Magic Telecom, had proposed to Abdul Razak that Dino be given a five per cent shareholding in Magic Telecom to ease the obtaining of the spectrum approval and other necessary licences.

The affidavit also stated that they both allowed the involvement of Dino to assist other employees in Magic Telecom from Jan to July.

In the petition filed, Abdul Razak and Aishah had enclosed a copy of the EGM dated Oct 11, signed by Looh.

Abdul Razak, in the petition, also stated he believed the EGM was being called with ill-intentions.

He said despite him giving a notice on Oct 4 to Looh and the other directors of Sejahtera to refrain from requisiting any EGM because Sejahtera was not a valid shareholder of Magic Telecom but just a temporary loan borrower, he did not get a reply from Looh.

Abdul Razak said he believed Looh’s action to call for the EGM was to extend his intention to take over Magic Telecom via Sejahtera.

The prayers in the petition included an injuction restraining or preventing Sejahtera Saluran and Looh from exercising any powers and rights as directors or shareholders of Magic Telecom and also to declare the additional issuance of RM4 million, which was allotted on July 21, 2010 as ordinary shares in Magic Telecom as null and void.

He also pleaded for an order of rectification of the share register of Magic Telecom to delete the shareholdings of Sejahtera Saluran of RM4m shares in Magic Telecom.

He is also claiming for an order of damages against Sejahtera Saluran and Looh or in alternative, an order to buy out Magic Telecoms shareholdings at a fair value to be determined by the court.

He is also seeking an order that the petitioners buy out at the total of RM350,350 shares of Looh at a fair value to be determined by the court.

In the alternative, an order to wind up Magic Telecom under the provisions of the Companies Act 1965 and that the official receiver be appointed as liquidator.

The injunction hearing of the petition will be heard on Nov 18.

In an SMS response to The Malay Mail this morning regarding the mention of his name in the afidavit Dino said: “I don’t have anything to do with Razak. I was merely invited by Desmond (Looh) to advise him in terms of Malay write up and Malay social ethic since his Bahasa vocabulary is not that generous.

“Furthermore his partner (Abdul Razak) is Malay and I was only giving personal views regarding simple matters. I never touched on business dealings and I’ve never owned a telecommunications company as mentioned lately.

“Perhaps Razak is not happy with certain things hence he is claiming ‘names’ as a stepping stone to wrestle things his way.”

That should confirm there is such a rumour on Rais's son, Dino.

On Rais's denial that his son's involvement in any contracts, hmmm ... will have to wait till this court case is over to believe that.

I urge you and other Bloggers to seriously consider this:

Stand in the next General Elections as Independent Candidates.

I will vote for you or any sincere, brave and impartial Blogger who contests in my Constituency.

I'm sure many Malaysians will agree with my suggestion

I no longer have any confidence in both Barisan Nasional and Pakatan Rakyat.

Please, stand up for the people.

LibangLibu... Dino is a beruang

Don't tell me you are too naive to see that this Rais war on the Mahathirites bloggers is just a manifestation of the civil war within UMNO for the right to rape the wealth of the country. Collateral damage is of course the rakyat whose hard earned RM is ripped from us for the benefit of UMNO members

so many more important and more impactful issues out there but this small band of bloggers insist on dwelling on something on the sidelines.Whats with them?

The so-called Mahathirites bloggers is not at war with Rais.

He is friendly party. I supported him for VP.

Our bigger war is against corruption and arrogance.

For that matter, corruption and power abuse is not important, Anon 9:34 AM?

Bodoh la both of you.

Say what you want but we know the rakyat is the collateral damage of UMNO's greed. If you people are not Mahathirites then why pick on Badawi's dog Rais?

It seems everybody this blog supports ends up a loser

Ayam, the Bloggers are one of the the third force and we can be political and yet do not have to be partisan. We support issues not person or parties.

Panji panji are not anti
government , only anti incompetent government.

You are talking thru Anwar's asshole.

Vinnon is an idiot with a baclside reserved for anwar and azmin...

Guys, since you are still at it why not come down hard on the other of similar ilk to what you alleged did or omitted to do.

Remember Nazri Aziz? Ask any taxi f'llers and they will tell you that his link whether apparent or otherwise is still there with some big time taxi services companies.

If you can come out so strong on the burning bridges guy why not the 'cab man' as well?

Or are you just being selective?

UMNO wants the world to believe that all is well in UMNO. We KNOW factions do exist in UMNO and Rais Yatim was a Trojan left behind by Badawi in Najibs cabinet. My question is how come you Mahathirites do not hold Mukhriz responsible for the disastrous state our FDI is in. After all isn't it the Deputy in a Ministry who does the perspiration to achieve the objectives of the ministry? This latest attack on Rais is just a continuation of you Mahathitites going after Badawi's boys in Najibs cabinet. Stop thinking the rakyat are fools. We may not like Badawi but we hate Mahathir and his 'C4 keris waving with your blood' PM.

What the heck? Are you all idiots? Freedom of expression doesn't mean you can talk anything rubbish. If you don't want to be called goblok then buck up yer mind. Don't simply jump to the conclusion. Give that old man a chance to defend himself. What a shame!