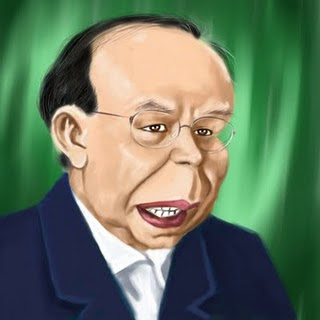 Does these postings here and here constitute defamatory and offense under MCMC Act?

Does it warrants the Information, Communication and Culture Minister, Dato Seri Utama Dr Rais Yatim to lodge a police report and instruct MCMC, an agency under his purview to investigate Rocky Bru and Bigdog?

In their postings, neither Bigdog nor Rockybru accused Rais or did a character assasination. Off course, some may argue otherwise.

For reasons best not known, comments by bloggers Jebat Berkokok, Hero Kecik and Warta Citra Cafe comes as no surprise.

For the time being, let's leave aside Lenggong Valley's word that Rocky has succumbed to gutter journalism. And take his claim that he "does not know DS Rais personally", but could highlight statement of MCMC.

And also, will assume writing "... another poor attempt at pandering to some unsavory parties in the run up to the UMNO Pemilihan next year to move DS Rais out of the way and nudge someone else to fill the void" is not considered gutter journalism.

Rais has denied any such possibility. The Malay Mail reported it here and here. The paper that Rocky rebuilt gave him the space. It shows Rocky's sense of fair play.

That should have ended there.

But no, Rais decided to flex his political muscle and authority to do more than that to this Skodeng-like offense. It is Skodeng-like because it is considered as spreading "false news." Frankly, there is no case. If there is, it could be defended.

Journo-blogger Jailani described here of Rais's reaction as "complicate the matters" as though they are not Mesra-BN bloggers. Syed Akbar warned here that "This one is going to cost the Government plenty. You are going to lose the support of the Bloggers again."

How inconsistent and foolish can one's ego make one to be?

When pro-PAS Aduka Teruna posted nasty words against my Sultan Johor, Rais uttered forgiveness without any consent from the Sultan to do so.

He could 'forgive' Aduka Teruna, but why is he edgy on this one?

The directly affected son is silent, despite the whole ordeal is already described by The Malay Mail today as Rais' son telco fiasco.

Is it because of the mere mention of his name? If that is the case, it would seemed he is above the Sultan, and Rais and Maznah have to be addressed with a DYMM acronym in front.

While Rais did ordered investigation into cases like Namewee, he did not on "false news" on Tun Dr Mahathir written by Barry Wain in his book, Malaysian Maverick. Even PAS can sense the inconsistency. Read PAS supporter blog Tempayan Retak here.

Sadly, not only did Rais not realise his inconsistency, he did not realise that he is attracting attention and self-fulfilling a growing negative perception of himself, his Ministry and Ministry personnel.

When Rocky's did the Santa Rais posting, it did not picked up much attention.

It seems any comments against this Ministry will attract attention.

If this comment attracts a police report and MCMC investigation, then do be fair to report all the blogs that made the comments. Should they not do so, all the bloggers should do the reports. Rocky and Bigdog would appreciate some company.

The more the merrier.

The manner Rais is pursuing bloggers will only substantiate a long held suspicion that he is out to get bloggers. Listen to Rais's "Pertemuan Persahabatan" speech on April 23, 2009 in the You Tube video below:


For a first encounter, it was inappropriate for him to mention all those laws. The late Ancient Mariner thought then that he had nothing new to say and was "mildly threatening."

Certainly hope his memory is not failing, it was the many episodes against bloggers by BN politicians and leaders in pre-2008 that contributed to BN's dismal result that has yet to reverse.

With the UMNO and BN political machinery weak, Rais should not forget that it is the relentless effort of Mesra-BN bloggers that is filling up their slacks.

That is one issue. The law is the law. Was Rocky and Bigdog malicious in their posting?

Bigdog's posting was about calling for the bidding process for the 2.6GHz spectrum to be transparent. Is that wrong?

Let me pick out the except from his posting below:

... However only three out of the nine companies bidding would benefit from this grant. The three is not ascertained yet at this time.

One damning rumour that looms with this is that a close family member of the minister-in-charge Dato’ Seri Utama Dr Rais Yatim has been associated in lobbying for part of the grant for one of the operators bidding. This cannot be true as Dr Rais is a respected senior member of the Cabinet and has been around in the Federal Government since third Prime Minister Tun Hussein Onn’s time (with the exception of the interegnum period between 1987 – 1999). If this rumour is true, then it would be a scandal which Prime Minister Dato’ Seri Mohd. Najib Tun Razak is gravely unable to afford.

The right way to do this is transparency. The industry is very small. Any movements would be known. More over if it involves grants which are RM hundreds of millions.

Favourtism would simply be detected almost automatically. How the grants would be awarded would create negative perception. It is imperative that the delivery of the 2.6GHz spectrum is done properly to the parties who are deserving and able to follow it through.

It was a good reminder. An extract of Rocky's questionable posting reads below:

... Close to a billion ringgit, courtesy of existing telco players, including Telekom Malaysia. The money will go to three out of nine companies which have been awarded licences to operate Wimax and 3G. Why three companies? Dunno. Which three? Dunno, but Big Dog heard some disturbing rumor about a Minister's son being part of the nine, or three. There's also talk about a D-G's son or KSU's son being involved. But talk is cheap and gets cheaper by the day. ...

After reading all that does by mere mention of Rais name constitute character assasination?

Bigdog qualified by explicitly saying he did not believe the rumour. Rockybru said talk is cheap to mean prove it. The exact argument the Setiakawan bloggers are ganging up and expressing their ill-intention against Rocky and Bigdog.

Hope Rais is not deceived by their new posturing. They were never on Rais side or were ever Rais supporters because they will not support anyone close to Tun Dr Mahathir.

Instead of giving a simple denial, Rais could have cleared the air by divulging the background of the nine companies bidding - Celcom, Maxis, DiGi, U-Mobile, P1, Redtone, YTL, Airspace and Puncak Semangat - that is not common household names or new entry in the 'game'.

That is transparency. Rumours has it that YTL is a sure winner. Can he clarify that also?

There is no way of guessing why Rais is jumpy.

As far as my memory of Rais's political career, which is only of his days at Federal level, he is generally seen as having a spotless record and has never been heard linked to any corrupt act in his 40 years in politics. This was the virtue that made this blogger supported him for the Vice President race.

His record should speak for itself.

By reacting this way, he is attracting suspicion. There will be those speculating that he is in a "too close for comfort" situation.

This blogger suspect the last thing Rais wants now is to have his name tainted and surface in any hanky panky. He needs to keep his good name intact to face a career crossroad event in the not so distance future.

It is not politics.

Sorry Lenggong Valley your suspicion is way out.

It is interesting that tuan should point out an MCMC press statement posted by a blogger in your take. I think not. I have in the past received press statements, too from govt bodies to highlight. No big deal here.

Gutter journalism? Hmm, should anyone not involved be bothered/ Then, again I think not, eh?

It is consider defamatory and an offense to critics "minister" which i assumed is untouchable and immune from the law. Guess those politician is just above the law and ppl or journalist cannot critic or write bad things about them. Just wondering what will happen next. Those who clearly insult the country, making fun and swear to the glc's just left with nothing. What a shame.

Rais claim he had to report on Rocky cause of family honour.

Must be more than that.

Come to think of it, spreading rumours in Malaysia is still an offence, what more thru unregistered media such as blogs, or the various social networks.

The fourth estate is not absolved from prosecution either Let the law take its course.