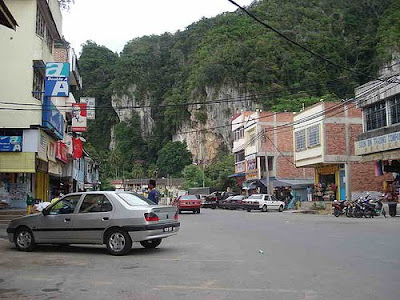 During my brief return from Galas on Saturday, this blogger had a telephone conversation with socio-political blogger and writer, Mohd Sayuti Omar.

After expressing my agreement with his view of the UMNO Vice Presidents closing speeches, our conversation drift into the subject of Galas by-election. He had written earlier of the internal problem besieging UMNO Gua Musang election machinery due to internal sabotage.

When asked of my views on Galas, I summarised Galas as an election of Issues versus Machinery. UMNO and Barisan Nasional has issues in their favour. PAS has a vibrant, energetic and dedicated election machinery.

The likely winner will be the side able to strengthen or cover their weaknesses.

Gua Musang - at the southern part of Kelantan - is also the largest territory in Kelantan. It covers one third of the state of Kelantan.

From a hutan, settlers came from all throughout Kelantan and outside the state to clear the jungle, establishment settlement and open up farms. The activity to open up new farms has not relented. The current phase is the establishment of vegetable farming in Lojing and Ladang Rakyat.

One problem pervading in Gua Musang from this land rush over many years is land ownership.

After initially settling down, settlers would apply for Temporary Occupancy Land (TOL) title. Having approved and established themselves, they would apply for permanent land title.

The hot issues against the PAS Government is all related land and it is mainly the long overdue promises to issue ownership title to settlers, be it Chinese, Malay, and Orang Asli.

Pas has been ruling the state for 22 years and taking over with the help of Parti Melayu Semangat 46, which was then led by Tengku Razaleigh himself. Logically, blaming previous BN Government as excuse should not work.

Abuses, corruption and partisan crony practises in land matters are rampant and widespread.

From the illegal and unjust land acquisition for Ladang Rakyat on Malay and Orang Asli, environmental issues from state sponsored illegal logging and vegetable farming; and infringement of the Orang Asli Act.

State Government partisan biasness in sabotaging the issuance of land title for the already built Kesedar low cost housing scheme; and allowing settlers to be kicked out of their land to be replaced by PAS members are issues that could be capitalised by BN.

However, these information is only available on the Internet. This mode of psy-op only serve to broadcast and highlight the problems of the Kelantan PAS-led Government throughout the country and paint a true picture of PAS.

While this is not something PAS will want with the national political focus on the two by-elections, its impact in poor broadband coverage and low Internet penetration area of Galas (gampangnya Internet sini!), Gua Musang will be minimal.

It still needs the old school election campaign machinery like pamphalets, open ceramah, house to house campaign and basically all forms of direct real world communications. These are areas where UMNO are neither strong nor have the lead start.

Furthermore, Ku Li’s strategy to keep the campaign as a local affair with outsiders playing only supporting role. Local lead and determine any campaign activities in each “peti undi” area.

Ku Li is keeping a tight grip on campaign strategy and machinery. There are many “no”s including no personal attack, no open ceramah, and both side agreed “no” subjudice oil royalty issue. It has given the perception to many that Ku Li is also saying “no” help from outside.

That has already been reflected by the psychological advantage PAS has on UMNO with the proportion attending nomination this morning is 8 to 3 in favour of PAS. But this can be brushed off. UMNO is never big on “opening night” performance.

UMNO needs a string comeback because PAS have imbedded themselves in Galas for three months, even before the death of the late YB Che Hashim Sulaima. Their talk of being in the disadvantage due to Ku Li leading the campaign for BN is all merely psygame.

The Dewan Muslimah have done their house to house campaign. PAS have arranged a meeting of the Tok Batins of the Orang Asli community with Menteri Besar, Tok Guru Dato Nik Aziz.

Since the 2004 General Election, PAS have made in-road into Ku Li’s traditional support amongst the Malays and Orang Asli. The Chinese, mostly farmers, retailers, and rubber tappers, is expected to be pragmatic. PAS have not honoured their promise of land titles but initial finding shows Chinese will give their votes to PAS for reasons PAS have promised not to “kacau.”

They have done the table talk with the Chinese taiko and taukeh. The Chinese taukeh from amongst the loggers, Ladang Rakyat operators and leaseholders, and vegetable farmers will naturally lean to the political party buttering their bread now!

Names like Dato Kenneth Tan, Ah Min and Dato Bernard Loh will be common names associated to PAS as their crony. They not Kelantanis Chinese but outsiders from as far as Singapore. Most of the vegetable farmers are from Singapore, Penang and nearby Cameron Highland.

But Ku Li is an old hand. He has been part of the national political scene before most of members of the Pemuda UMNO Malaysia learn to do their own hygiene.

UMNO President and Deputy President knows that. Without Ku Li as Director of Election, it will not be any easier for others to run a political campaign in his home turf.

Some may say time has fly. The train has left the station on Ku Li. Things are very different. Young Orang Asli may not be calling him as “Raja Kite”. However, his magnanimity in the eyes of the local Gua Musang remains. That is one advantage for BN’s campaign.

Still … just like the need for BN’s campaign machinery deliver the issues to the ground, the same machinery is needed to promote Ku Li’s magnanimity into a winnable campaign against the mighty PAS machinery. The presence of the old political war horse will be needed.

Galas and Batu sapi by election.

For Umno, PAS, PBB and PKR, it is either win or lose.

the malay liberals at nst are squirming in their seats. every good thing will come to an end

btw hamidah atan has a head as big as a balloon.

must remember a balloon will burst when the air get hotter

Can BN list all the development that had occurred in Galas and Batu Sapi in the last 5 years ? Not just campaign promises for the future. What has BN done in the past for these two areas ?