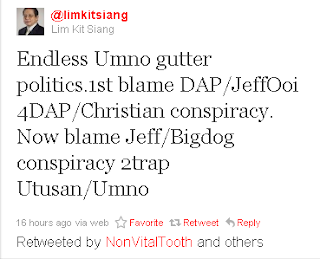 The above was Lim Kit Siang's twitter this morning. He seemed confused with a difference in opinion amongst pro-UMNO bloggers.

As far as this blogger's position, it is neither "DAP/JeffOoi4DAP/Christian" conspiracy nor "Jeff/Bigdog conspiracy 2trap Utusan/Umno" but focused on a DAP conspiracy to use the churches.

It doesn't matter that Association of Churches Sarawak (ACS) secretary-general Ambrose Linang was reported by MI on April 15th here as saying he did not want the churches to be drag into politics. Theresa also tweetered her denial on April 14th.

But, it is NOT sufficiently convincing to say that DAP and Pakatan Rakyat did not used certain churches and Christian NGOs to campaign for their cause.

Kit Siang subsequently stayed on course in his Tweeter like any guilty spinmaster need to maintain the same lie: 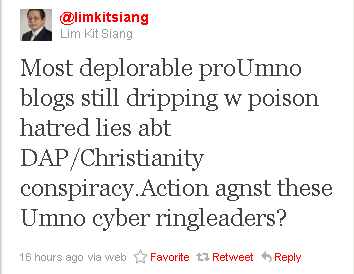 This could be a repetition from an earlier posting.

A blog reported him giving a sermon.

The presence of DAP politicians like Theresa Kok campaigning to church groups was known despite being seen distributing pamphlets outside churches in broad daylight.

If Muslims are not allowed by religious authorities to talk politics in Masjid and Surau, DAP was seeking and getting access and expoiting it. It takes two hands to clap.

From the success and link developed in Sibu, DAP went further to exploit Allah and Malay bible issues and used the churches to fortify themselves in the Chinese-Christian city areas in Kuching, Sibu, Miri and Bintulu.

DAP and Pakatan Rakyat experimented to use the churches to breakthrough into Non Muslim Bumiputera areas, particularly the interiors. The information received were that pastors from Miri were in Ba'kelalan to campaign for Pakatan.

Other than Pastor Ngeh Koo Ham, there are several DAP politicians with background in church activism; namely Theresa Kok, and Hannah Yeoh. Below is the tweeter records of Theresa Kok and do observe how much meetings and "DAP fellowship with christians organisations were held: 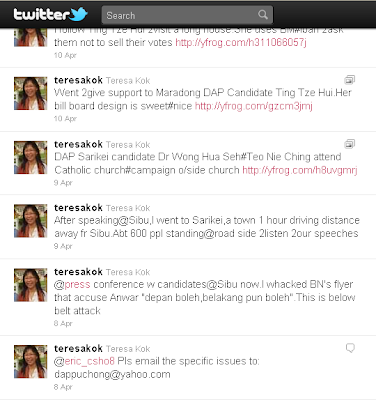 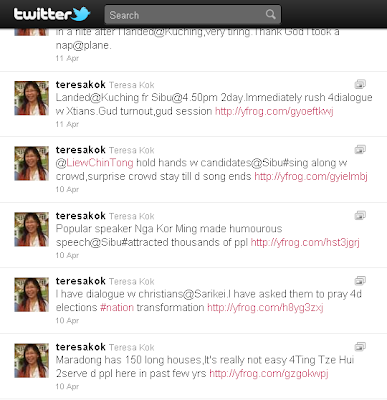 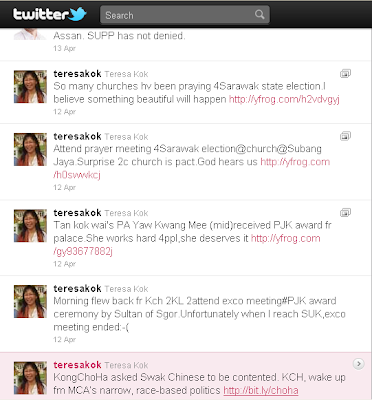 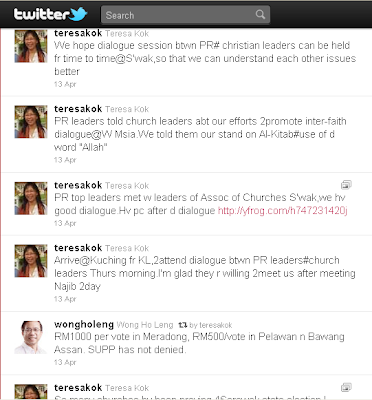 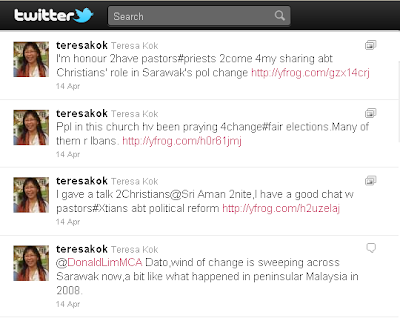 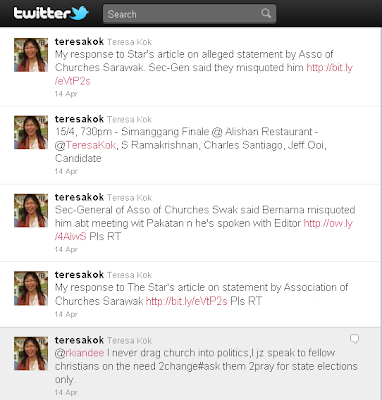 Wikipedia here described "fellowship" as to refer to individual Christians who are in Communion (Christian) with each other. Communion means close relationship of Christians.

He like to believe that there was no such pledge to turn Malaysia into a Christian nation but raised questions about the joint Christians Federation of Malaysia and DAP press conference.

CFM could have called those pastors allegedly involved to deny. Why were they not present?

CFM should have held the conference by themselves and deny the allegations by the bloggers. By having the press conference with DAP, one cant help to feel that the patron for all Christians is not free from partisan politics.

The fact that DAP and the Christians were to quick to used Utusan Malaysia as scapegoat instead of just focusing on the bloggers that came out with such allegations.

Utusan Malaysia gave coverage to two sides of the issue, unlike many opposition news portal and Chinese newspapers. Not only does it shows DAP and the Christian organisations and individuals "playing" politics, they are in state of fear to cover-up.

It took two days for Jeff Ooi to change his position from not knowing what happen as he is busy on i-Pad" to a "denial and later police report against bloggers and Utusan Malaysia".

Does it took that long to concoct a simple denial?

There is still more from where it came from. The findings from police investigation should be interesting.
at 5/12/2011 10:54:00 AM

Your judgement here is based on the activities of christian in fellowship/gathering with DAP hence led to the point that they are into politics. Im sure you will not reject politician to comply rukun malaysia: kepercayaan kepada tuhan. Religion & belief should not be isolated from our lifestyle, as it reflects human characters. My suggestion is when you study the heart of christinity,their foundation of "love", you will have different thoughts in politic & religion view. Their intention is pure and selfishless. :)

Sounds like only Atheist can vote for the opposition???? Note/warning to all opposition politicions, "cannot talk politics (how to make Malaysia a better place for everyone)to anyone who belief in the higher being. It's haram!!!!
what a load of S#!^.

I know what happen if the Masjid allows political activities in their premise?

It is sure to bring divisiveness in the Muslim community.

Will that not happen when political parties activies are organised together with house of worships?

Racism can divide and destroy a country.

Communalism based on religion will be worse. People are willing to die for religion.

Pleaselah, A Voice....Masjid has been used by both PAS and UMNO for political gains even before independence. Don't try to act innocent (or ignorant).

So what's wrong with certain DAP members being active in churches. Of course they will talk politics behind close doors, they are only human beings!

Nowadays, even in coffee shops or markets, everyone talks politics. The whole country is so political charged up now! How to avoid?

There is still no shred of evidence that the christians are "praying" for a christian state or christian PM.

So your argument holds no water. Sorry.

"The only time" these PR and their fellowship don't deny is when winning election.

we have to live with it - until the next GE.

what we care most is rising prices, expensive housing, slow wage rises, not this fuckin charade orchestrated by who-knows-who

Hey, BN (UMNO) & PAS had been campaigning in Suraus and mosques or outside of it since day one. So, what is the problem of opposition is campaigning outside the churches and definitely not inside??

Your blog is getting more & more disturbing and misguiding!

BN is getting very afraid as it seems the religious ppl from Islam, Christians etc now realized that PR is the best choice for the ppl as per what they're being preached..