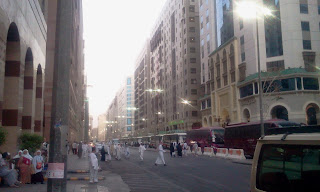 And so imagine the shock he receives when he made that once-in-a-lifetime journey of every Muslim: the Hajj pilgrimage. For thence, huddled amongst three million other Muslims, performing the same rites on the same Google spot before the same Lord of the Worlds, where colour and creed pales in comparison with faith and deed, it doesn’t take long for Apocryphalist to realize that he is no more great than a heap of shit really is.

How Apocryphalist had been there and done that. Slept on cold nights in the Rockies and braved the hot Belgian summers. Sailed the murky-blue Bosphorus and trod the brick-laden pathways of Champs d’Elysses, of Lyons. Stomached Dutch insults in Ridderkerk or praised in Lisboa. Wrestled the trouts of Windermere and danced with the morning dews of Kyoto. Tamed white stallions from the Northern Seas in `Lynn and argued with the disciples of Socrates in Syracuse. Shifted through the royal ruins in Mandalay and survived the streets of Quetta. Bear the curse of Kings in Persepolis and conversed with the dead poets Jami and Sadi.

But nothing in life had prepared him for his encounters during this pilgrimage, for there, he had met one person he hadn’t met in all his entire journeys before.

PART A: MEDINA - THE CITY OF LIGHT 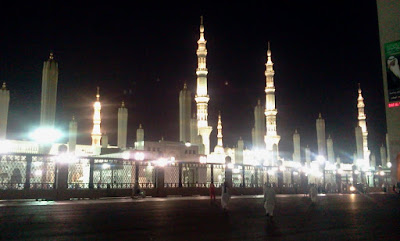 A whiff of fragrant air, neither hot nor cold, greets him as he stepped down the airport, prompting him to wonder: could there be any chance at all that these same air molecules that he breathes in are the same ones that was breathed by the most noble inhabitant of this city about fourteen hundred years ago?

Naaaahhhh… well but wait: air molecules are made up of atoms and in each atom are protons. A proton’s life span is about 10^32 years, ooohhh… about a trillion, trillion years. So there! Apocryphalist’s musings are not so much nonsensical after all!

There, yonder engraved upon the light blue sky, is Uhud, the mountain that breathes. “I love Uhud, and Uhud loves me”, he said. And on Uhud were battles fought, and won, and lost. And on Uhud too were hopes made, and dashed, and made and dashed up till this day.

When news of the Qurashite polytheists coming to attack Medina came from the scouts, he had preferred to let them come to Medina and fight there. But his companions opined that it would be better to face them out of the city, and he agreed, and Uhud was the scene of a most heinous battle.

And thus the battle began. In the blink of an eye, the enemy was routed, and they fled. And they gave chase, and seeing this, seeing how easy it was that Allah gave them victory over the polytheists, 40 out of the 50 archers left their post and started to scramble down for the goods and the spoils left behind by the fleeing enemy.

In no time, the cavalry led by the then-still-a-polytheist Khalid al-Walid, noticed the unguarded territory, passed through the backdoor of the mountain vale and onto the abandoned flanks, and slaughtered the remaining Muslims. Seeing this, the spoil-getters realized their error, ran back to the spot, and they got slaughtered themselves. The fleeing enemy additionally made a U-turn at this turn of events and helped in the kill.

The Muslims elsewhere got the beatings too, and the most noble man himself was struck by the enemy’s sword until the metal helmet protecting his noble head gave way and he got bloodied in the event, breaking a few of his teeth. And nonetheless, he saw a brave Amazonian Muslimah dispelling the enemies with her sword, protecting him. 70 Muslims were killed that day, and only about 20 polytheists faced the same faith. Just because, and only just because, the Muslims had disobeyed ONE single instruction of the most noble of men.

How many have we disobeyed today? And we are wondering why the Muslims presently are weak and downtrodden?

Uhud – the mountain who loved, and was loved. 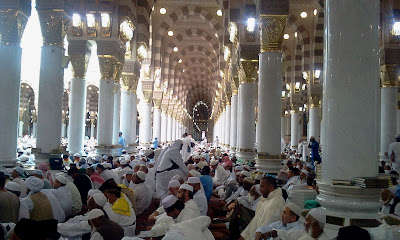 I thought Badshahi was huge, and I thought the Jame in Delhi was huge. But the prophet’s mosque defies description.

Being in Medina isn’t part of the Hajj ritual, but why else would they all be here if not for love, for longing for that most loved of the objects of love? And if it is not Love, how would you explain the fact that to each of these worshippers, coming to his mosque two hours before the azan of the morning prayers at 5am in the morning would be considered too late already?

Of Camels and Donkeys 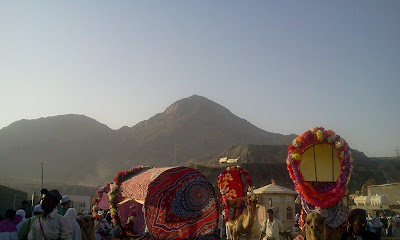 After the battle of Hunain, the Muslims had won and the Polytheists had fled with tails between their legs. The spoils of war were gathered and now to be distributed. And he distributed them.

And from a distance, the Ansars (the Helpers) were just …observing. And they observed, silently. Until one of them could not contain anymore, and said, “The man had gone back to his people.”

And the hypocrites and the jews took no time to seize the opportunity to sow discord.

“What did I tell ya, people,” they said. “When he is need of of us, he’d rally for our help. Plead for our assistance. And now in the time of success, he forgets us, and prefers his people over anything else.”

But these whispers they passed along in private, until the Yathrib winds could no longer contain the breezes of discontent no more, and it landed onto his ear.

“What’s this I hear, O Ansars? That there are talks about the Prophet of God giving spoils of war to the Immigrants and leaving out the Ansars? Is this what you people think”

“O Prophet of God,” said the leader amongst the Ansars. “I stand by my own people.”

“Alright,” he said. “Bilal --- call the azan and gather all the Ansars in one tent, and do not let anyone enter it except the Ansars.”

When they had gathered, he gave a little speech, extolling the virtues of the Ansars over the Muhajirs, reminding them how he, even though an Muhajir himself, love them so much that each valley and hill traversed by the Ansar he would make sure that he is amongst them.

And then his speech got a bit more throaty. “O Ansar”, he said. “Are you not satisfied with the fact the to the Muhajirs the Prophet of God gave Donkeys and Camels, while to Ansars he gave him his own SELF, his heart and his soul?”

Hearing this each and everyone in tent broke down crying, and realized the true meaning of Love. At this point in the story, Apocryphalist would let go too. every time he hears it. 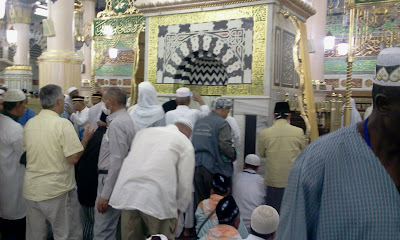 Ah, what can convey to you what the Rawdhah is? Amongst some of my non-Muslim readers, it would be almost an impossibility to describe to you all the significance of this spot called the Rawdhah --- an area about … oh less than 10 meters by 10 meters square, just behind the Prophet’s sermon place in his mosque.

Millions would throng to be anywhere in that spot even if it would be for a few seconds. In it, hearts’ desires are met. Supplications are made to God and, if found favourable, God would grant it. “Between the mimbar and my resting place”, said the Prophet of God, “Is the Rawdhah of Paradise. Whoever prays to God in it, will be granted”.

On Thursday last week sis Roziesms’ed me saying if I am in the Holy Lands, to please pray for her daughter whose hands had not been …errr … “asked” and they’re getting worried: she’s already passed the blissful age.

I was fortunate to secure a spot in the Rawdhah for a few minutes Saturday (after battling the spot with thousands of people at 3 in the morning) and I did pray for my niece. This morning (Tuesday) she called, and said someone had come to propose yesterday….

Coincidence? Yes, let’s all think so.

Of Caesars and Chosroes. 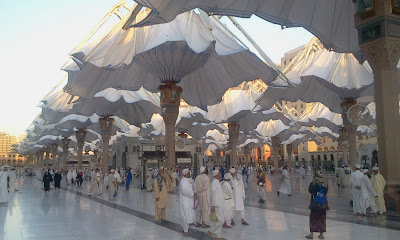 Omar came rushing to his abode one day after hearing that he had been displeased with one of his wives. Fearing that it could be his own daughter who was also one of the mothers of the faithful, he had admonished an struck her, and thereafter ran as quickly as he could to try to appease him.

Seeing this Omar cried. “O prophet of God”, he said. “Look at you. The Caesars of Rome and the Chosroes of Persia are at this moment reclining on their beds made of down and silk, while you, the Prophet of God, are sleeping on palm leaves.”

Hearing this, he sat up, with a surprised look on his face. “Omar”, he said. “Are you still in doubt? The comforts of this world are nothing compared to the comforts of the hereafter. As for my needs in this world, I should so love that whenever I feel hungry, I could pray to God for sustenance and if I should feel sated, I could have the ability to be thankful to Him. Wherefore have you strayed from this, Omar?”

Yes indeed, folks. Wherefore have we all strayed from that?

And here, beneath the earth of Medina, lies the body of that most blessed and most noble of human beings.

Apocryphalist is a regular commentator in this and other blogs. He spotted this blogger taking pictures at the Perdana Haj course in Putrajaya and have been keeping in touch since. He is performing Haj this year. We met in Medinah but yet to meet up in Mekah.
at 10/27/2011 05:48:00 PM