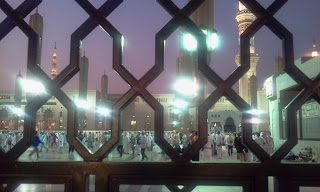 The little inconvenience to withdraw cash to Tabung Haji depositers is practically over. By yesterday, pilgrims were able to withdraw up to RM1,000 a day.

This is but some of the Haji experiences. Being Malaysians, many pilgrims are loudly voicing grouses on petty matters.

If it is not about eating packed food, it is the cooking. If it is neither about both, it is about not having home taste sambil belacan or sambal ikan bilis. They should know that belacan, ikan bilis and udang kering is an expensive delicacy here. Or there are those that expect food to be delivered to their rooms.

If the food is not a problem, there are those that complained about the packed accomodation. It is little of this and little of that.

If only they know that there are rooms, in the Al Haram Hotel they are staying, that could fetch in the off-season as high as SR1,000 a night. That is a good deal for Muassasah Haj.

And, if only they know, Tabung Haji had put in lots of effort and dedication to make their journey safe and problem free to ensure they are able to perform ibadah in comfort.

The cash withdrawal inconvenience pales in significance to the opportunity to perform ibadah at the home of the Prophet.

Certainly, visiting Medinah before Mekah presents an opportunity to acclimatise and prepare oneself physically and spiritually to the more challenging visit to Mekah and performance of the Haj.

We are scheduled to leave for Mekah this evening at around 7 pm Saudi time October 18th (around 12 pm Malaysian time 18 October). It is going to be a sad affair to bid farewell to the soul of Muhammad in the land of Medina this 'asar.

For the past 8 days from October 10th, we - myself, my wife and sister-in-law - have not done much. Like the rest of pilgrims, much of our time were spent going to and from the Masjid for the five times daily prayers. Here, one has to be really to get a good location.

In between, we try to do as much sunnat prayers, wirid, zikr, doa or just reading the Quran. Sometimes we try to do our ibadah near the Prophet's grave.

My Quran is already downloaded on my Galaxy Tab, so I am reading from it. It saves me the inconvenince of going through the crowded Masjid to reach and return the Quran. The Galaxy Tab is giving me much attention from on-lookers and at the same time, attracting beggars who thinks I am such rich men with a toy.

In holy Medinah, we try as much as possible to refrain from shooting our mouth or having improper intentions. Sometime we do not know that what we really wish for could happen and that turned out for the worst.

With hundreds of thousands congregating into Medinah and millions in Mekah, many things in our daily life that are usually taken for granted can be a challenge.

The large number of people makes the condition seemed chaotic with people rushing for the better spot to do prayers at the Masjid, to have a chance to do prayers in the Raudah and visiting the Prophet.

The expansively large Masjid that can be quite a tiring long walk.

Patience can get the best of us. And that becomes a real test on our tolerance for the smaller things in life.

It is important to remain focus on our purpose in coming here. That way, all other petty inconveniences do not matter.

Still, Medinah is only the beginning of bigger challenges from Mekah onward. 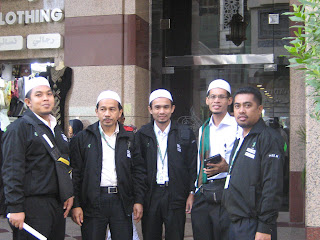 When hearing complains on TH, it is quite inappropriate.

Credit to where it is due, TH Haj operation had done a commendable job. Mind you, there are only a total 800 "petugas", with about 400 being personnel for medical and emergencies, handling 28,000 pilgrims from Malaysia.

They assist pilgrims, which are mostly old and/or first time travellers, with their immigration, customs, teaching bab haji, sending off and receiving at the airport and hotel, transportation, accomodation, food and even guiding through one's own responsibility of performing the ibadah.

That is practically the comprehensive service of first class hospitality operators.

The challenge on TH is to keep the "first class service" as low as to make it affordable but yet sufficiently comfortable.

Without those intentional but justified inconveniences like not being served breakfast, which could be part of cost adjustments, it would not be easy to send on pilgrims on muassasah package with such quality of service at the cost RM10,000.

Despite that, there are able to throw in ancillary services like ziarah. We had joined two of the organised ziarah. 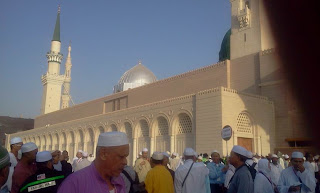 On our second day in Medinah, TH organised ziarah into the Raudah, Prophet's grave and grave of the sahabat and family at Jannatal Baqi. 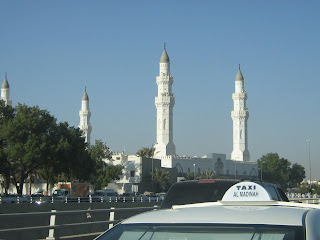 The next day, we were taken for a tour to visit the Masjid Qubah, the first Masjid built by the Prophet. 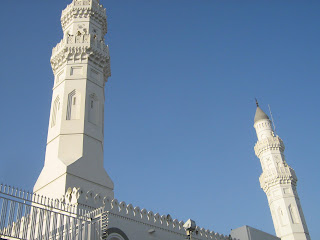 We passed through Masjid Qiblataini, Masjid where the Prophet was instructed to change kiblat in mid-prayers to change from Baitul Maqdis to Masjidil Haram. 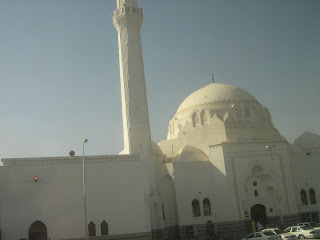 Along the way to the ground of the battle of Uhud, we saw the Masjid Jamaah, the first masjid the Prophet performed Jumaat prayers. 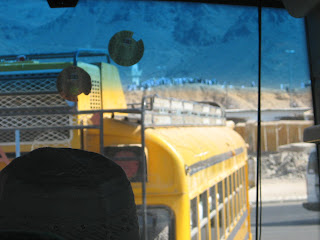 The tour guide, a Sarawak theology student with the Medinah Universty described the battle of Uhud. The lesson was obey command in a battle.

We then passed through Seven Masjids which is also the site for the battle of Khandak (trenches).

On Saturday, we revisted again Masjid Qubah and Qiblatain. My mother and many friends advised us that the benefit of performing prayers at Masjid Qubah is almost equivalent to performing the Umrah. 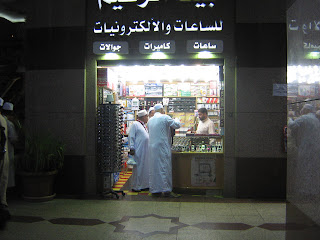 In between prayers and ibadah, we did do a bit of shopping. Be it prayer mats, perfume, clothes, etc, it is much cheaper than in Malaysia.


It is a Malay tradition to contribute to pilgrims. We received quite a number of donations from family and friends. 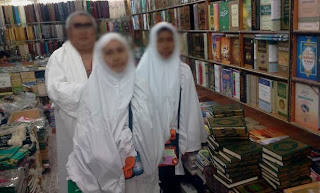 It is difficult to figure what the appropriate gift for them. Some of them regularly visit Mekah and Medina for umrah. So we decided to buy Quran and wakaf (donate) to the Masjid with them as beneficiary.

I was told that after the Haj season, the Masjid usually redonate and sent out it's Quran to other Masjid locally and abroad. It means that their Quran could be spreading elsewhere in the Muslim world.

Sprawling around the hotels built surrounding the Masjid are shops. The number of Malaysians and Indonesians shopping have made some knowledge of the Malay language as an important business tool.

We had only a day or two to get something for family and friends that we resorted to
nearby shops. Had we known it is much cheaper, we would have gone to the older Medina area where the Indonesians, Thai, Africans, Indians etc are staying.

The barang-barang have been posted via Pos Malaysia back and some family members can get their gifts in 14 days. Others have to await our return.

That was advised by TH. The reason we abide was that we hope to not be diverted from focusing on ibadah, umrah and Haj in Mekah.

thumbs up to Pak Ungku Aziz to comes out with this great TH ideas.

In WWII, Allied Forces Supreme Command was influenced by Field Marshall Montgomery that Holland needed to be liberated first, as part of the maneuver into Germany via Ruhr. Brridges over three part of river Meuse and Rhine must be secured. The plan; Allied Forces shall turn right and ride all the way into Rhineland and Ruhr from Holland there on.

With tall he might of Ike Eisenhower's entire European Theatre Expeditionary Force which comprises of USAAF, RAF and Monty's entire tank corp, to move 35,000 men and materiel and supply them constantly is never without its greatest difficulty; logistical nightmare.

Malaysians must learn to see the big picture. What ever the pettiness of their complaints, the nightmare that is inherent with the exercise is something unimaginable..

The best of operations people are not able to deliver, if they don't have the necessary experience and personal touches to it.

Alhamudulillah your Hajj trip has been good. We shall pray for it to remain as is, all the way. InsyAllah.

Again, don't know how you do it, keeping us abreast on issues affecting Malysian Haj pilgrims, despite your religious duties.

I have an image in my mind you rushing here and there :)

Is TH available in other countries?
It would be an excellent promotion of Malaysian fund management expertise viz Islamic Banking and of course managing Haj pilgrimage.

My answer and I insist to be: No!

I am crying when I read your posting.

Hope I do have the chance to perform this pilgrimage in the next few years, insyaallah!