Paying respect to the Prophet 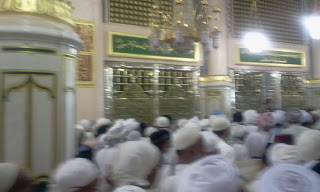 While on our direct flight from Kuala Lumpur to Medinah, cabin crew of Saudi Air SV 5701 turned on the lights at around 3:00 am local Saudi Arabian time.

It was time for an early breakfast. The choice for menu was fish or chicken with rice. It was to be our last meal till lunch at the hotel at 11:00 am. We should need the energy to undergo the standing and waiting at the Immigration counter, attending to our luggage at the Airport, the travel to the hotel and expected chaos of settling in at the hotel.

The noise of the cabin crew moving up and down the aisle woke me from my slumber. I was still sleepy. I am still tired from the rush the week before to prepare for the trip. I was not in the mood to eat. I wanted to continue sleeping.

While I tried closing my eyes again, I just could not sleep again. I knew we are close to Medinah. I begin to get excited to the prospect of being back to Medina again. After more than 20 years since my Ramadan Umrah in 1991, I am finally returning to the holy city of Medina.

In my last prayers at Medina and Mecca, I prayed to Allah to not end my life till I perform the Haj and revisit Mekah and Medina. After many tumultuous years of ups and downs between successes and failures, Allah answered my prayers.

I am now returning to “meet” the prophet again. Tears of joy begin to roll down my eye.

The visit to Medinah is not compulsory but highly recommended for Haj and Umrah visitors. It is to pay respect to the Prophet Muhammad s.a.w.

The Prophet’s mausoleum is inside the Masjid Nabawi, the second holiest Masjid after Masjidil Haram of Mekah. It is located next to an area of the Masjid called the Raudah, which is the distance from his home to the Mihrab of the original Masjid; the spot the Prophet would lead prayers.

The original Masjid is not the sprawling Masjid of today capable of housing 150,000 jemaah. When the Prophet expanded the Masjid, it was only for 20 m by 15 m. 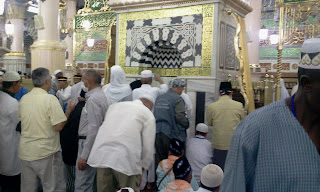 Raudah is also described as “heaven on earth.” That is where the Prophet seldom received revelations brought down by angel Jibrael. It is a highly sought after spot by pilgrims for the barakah to pray and do their doa. Based on some hadith, it is believed that Allah will not refuse doa made at the Raudah.

After getting our luggage and settling into our shared room, I took a nap so that I am fresh by zohor. By 11 am, I was awakened by my roommates knocking to enter our room and change into more appropriate attire for zohor.

I took a shower and put on the black baju Melayu I had on from Kuala Lumpur. I had a black clip-on sunglasses attached to my spectacle. It is a moving experience and I would not want to be seen in tears.

By the time we were out of the Al Haram Hotel, where we were placed at by Tabung Haji, the muezzin was calling the azan to mark the time for zohor. The Al Haram is not too from the Masjid, just behind the famous Masjid-front Oberoi Hotel. We had ample time to walk and join the jemaah.

People can be seen walking at brisk pace from all direction towards the Masjid. Nearby shops and at shopping complexes were already closed.

As we entered the Masjid, it was already packed to the brim. It is a scene one sees on a Friday in Malaysia but in Medinah and Mekah, people flock to the Masjid five times a day. This is a usual phenomenon during Haj season.

We read a special doa as soon we entered the Al Fahd main door. There were containers of zam zam water from Mekah nearby. I took a plastic cup full and cited prayer to seek useful knowledge, halal means of living, and healing power. And drink it.

I then walked along the assigned passageway and secured a spot to join the jemaah for prayers. This is a more orderly arrangement than it was 20 years ago.

After zohor prayers and citing of doa, I walked further front towards the mausoleum. I realised there were changes in the arrangement too. To pay respect to the Prophet, one has to enter through a certain door to visit the mausoleum. I forgot the name of the door. (It is Abu Bakar As Siddeq door).

The area to visit the mausoleum was sealed from the Raudah. It is no more like it used to where visitors reached the mausoleum through Raudah.

In the doa cited quietly in my heart, I thank Allah for giving me the opportunity to visit the Prophet. I mentioned of families, and friends who extended their “salam” to the Prophet through me.

Deep within me, I was only too happy and the beautiful translation of the doa was really moving. Tears rolled out of my eyes.

But it was too short.

On the second day of our stay, Tabung Haji arranged a visit for Malaysian pilgrims to the Raudah together with the Prophet’s mausoleum in mid-morning. This time we had some time to do prayers in the Raudah and a less rushing walk pass by the mausoleum.

That afternoon I visit the Raudah again and stayed till ‘asr prayers. This time I get to do some ibadah - perform several sunat (non obligatory) prayers, read a juzu’ of the Quran and do the zikr – and also make doa for many well wishers.

However, the visit to Medinah goes beyond paying respect, performing ibadah, and multiple pahala from ibadah performed at the Masjid Nabawi.

Its exactly a year since I did my Haj last year. But reading journeys to Medina and Mecca never fail to bring tears to my eyes. Masjid Nabawi fascinates me with its carpeted interior, fully air conditioned and zam zam at its passage ways.

Its fascinating that everyone eager to perform each and every solat together (jemaah). Of course, it is different in Malaysia as we all have jobs to do to earn a living.

I wish you a safe and healthy journey. Insya'allah, I shall return next year to perform Haj with my wife.