No fresh milk, No politics 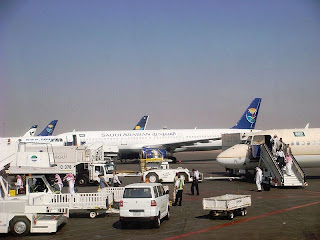 My first travelogue is delayed.

Oh well. It s a different place after all.

On the night of our departure on Oct 9 at the Kompleks Tabung Haji at Kelana Jaya, as soon as they begin to play a slow nasyid version of Labbaikallah ..., the pilgrimage got the message that it is time to depart with loved ones and friends.

All our family were advised not to sent us to the Kelana Jaya Tabung Haji Kompleks dues to the heavy traffic and crowd.

All except my mother.

Despite her legs not as strong as it used to, she insisted that having sent all her others sons and daughter (note the singularity), she has to send me too!

That is my stubborn mother. I guess one has to be strong-willed and firm to raise a family of seven boys and one girl.

There were several bloggers sending me off. Shamsul Yunos of My Anger (now Still Angry) was there with his wife. His presence serve to keep me to remember to pray for his invitation to the holy land.

Aspan Alias was there to also confirm rumour he is running on DAP ticket in Negeri Sembilan for next election.

Ghaffar, a close confidante to the Deputy Prime Minister, was there with his friend.

Off course, there is Big Dog.

They waited till we were finished taking the goodies and neck tags and helped squeeze these gifts into our filled-to-the-brim luggage.

As soon as we checked in at the Kompleks at 9:30 pm, we went through almost like an airport operation, complete with bag scanners. The main luggage are checked in and the Tabung Haji given bags are carried as hand luggages.

We were given a last pep talk before boarding the buses for the Kuala Lumpur International Airport.

The reminders were to focus on our ibadah and it is the same reminder given to me. Many worry I can’t shed my blogging habit. I promised it will only take a couple of minutes, ok.

We were reminded that we are carrying the good name of country and flag. Lots of Malaysian flags are pasted all over our luggage, sling bags, neck tags, ihram, etc.

The real gist ... no politics please. Do not bring political pamphlets there. No participation in any political demonstrations. No criticising of the Saudi King.

After getting on bus, some 10 Plusliner buses carrying us were given police escort to the tarmac of KLIA. We got off at B2 terminal to clear immigration and straight into a Saudi Air 747.

We reached Medina International Airport at 4:40 am October 11. As the formula BRT-TUC, we lost some time for travelling westward.

All the way from Kuala Lumpur to Medinah and every step of the way, be it on logistic, accomodation, ibadah, etc, there is Tabung Haji’s involvement. Haji. They were helpful and courteous, especially to the many older, unfamiliar first timers, etc.

We were truly treated carefully as "invitee of Allah" to his "house".

It is no joke. The operation in Medinah involves two zone with each zone covering three hotels. At any one time, there is 2,000 pilgrims here with new coming in from Malaysia and some going to Mekah.

The same team here will be going to Mekah to help out the Haj operation and upon finishing Haj, they will rush back top Medinah to receive pilgrims visitng Mekah after Haj from Mekah.

Mind you, the number of pilgrims is as much in numbers as the invading troops at Normandy during World War II, as what millitary freak Big Dog described.

That is a logistical nightmare. It is once a year and there are many seasonal workers. That is not like other full time hotel and travel operations.

Due to the long number of years of good rapport and work with the Saudi authority, Tabung Haji gets a special respect for their management. Other Islamic countries begin to emulate Tabung Haji's pilgrim management

As Malaysians, we should be proud because everyone looks at us with respect and envy. "Malaysie? Malaysie? ..." they would ask.

On the fresh milk, don’t get me wrong. Naughty ... please we are on Haj, ok. We were told to void drinking camel’s milk taken fresh from the camel.

As for the camel milk, lucky your good friend Husin Lempoyang "Berniaga unta". Otherwise, he wouldnt do well peddling the milk.