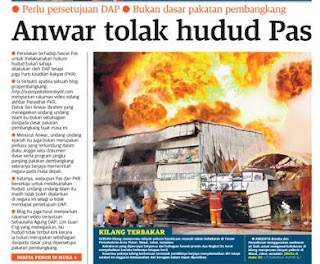 ... and Mahathir got them where he wants them to be.

Utusan Malaysia's frontpage today reported Anwar giving an outright NO to hudud and citing hudud is not part of the Pakatan consensus and the Buku Jingga manifesto.

Sounding like UMNO of the past, He said Pakatan will need to reach a consensual agreement between the three parties of DAP, PKR and PAS before hudud can be accepted as part of the manifesto of Pakatan Rakyat.

Despite Utusan Malaysia's affirmative sounding NO in their frontpage, Anwar was actually non-committal by wearing his hat as the spokesman for Pakatan Rakyat and treading the potentially explosive political issue carefully.

He also said hudud could not be implemented yet. [Read Utusan here]

It is still not the strong answer the Muslim public wants to hear given Tun Dr Mahathir's masterly accomodative stance. Neither is Dato Nik Aziz's politically diplomatic answer acceptable. 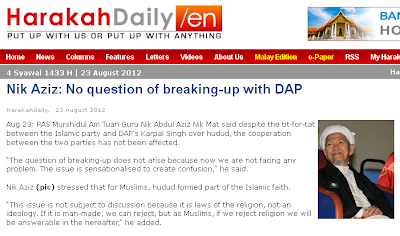 Nik Aziz's merely said the squabble between DAP and PAS should not create a break-up in the coalition but consistent with his past insistence on hudud, he said hudud is not for discussion since it is God's law and it must be implemented. [Read Harakahdaily here and here] 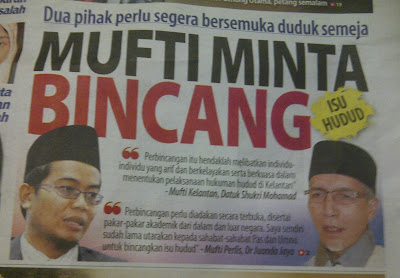 However, as Sinar Harian's frontpage for today, Perlis Mufti, Dr Juanda Jaya asked that both side, UMNO and PAS (look ma, no PKR) to sit and discuss the hudud issue with the presence of the learned amongst the local and abroad.

Kelantan Mufti Datuk Shukri Mohamad gave a similar stance but mainly on the implementation of hudud in Kelantan.

Like any politician, Harakahdaily did not leave issues without a reply. Defender of Anwar Ibrahim against alleged slander for sodomy, Cikgu Azmi Hamid of Teras said the Muftis should have reminded Dr Mahathir too. [read in Harakahdaily here]

Nik Aziz attempted to create a diversion by trying to drive a wedge between MCA and UMNO to Dr Mahathir's latest statement [read Harakahdaily here].

However, Dato Dr Chua Soi Lek is still giving space to UMNO leaders to blast PAS for their inconsistency and hypocrasy on the hudud issue. Only Selangor MCA Chairman, Datuk Donald Lim gave a token remark that was criticised in Harakahdaily here. 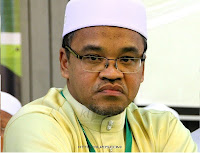 Unlike in the past, PAS leaders like Salahuddin Ayub, Dr Dzilkifli Ahmad, Dr Rani, etc are echoing UMNO of the past and voicing openly their reservation of hudud. [Read in Sinar Harian today]

Generally, the pro-Anwar Erdogan faction of PAS is quiet and left PAS's former President, Nasharuddin Mat Isa alone to defend himself. [Read Subky Latiff in Harakahdaily here in a bind to find justification not to support Nasha]

At the same time, PAS's former Deputy President, Nasharuddin Mat Isa, who initially dare to slug out alone against Karpal Singh to the extend of calling him anti-Islam and face him in court, is getting back-up support from other PAS and NGO leaders and grassroot members and leaders from amongst former PAS headquarter officebearers.[Read Utusan here]

PAS Information Chief, Tuan Ibrahim Tuan Man asked Karpal Singh to refrain from talking on the subject of hudud. If he had given his earlier view on hudud from his perspective of the constitution, he had attracted criticism from the pro-Nik Aziz Information Chief for claiming hudud as not fair and just. 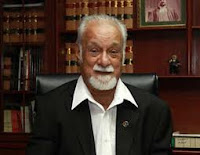 Tuan Ibrahim responded to say Karpal Singh do not have sufficent understanding to question hudud without understanding other aspect of Islamic mode of punishment like takzir, kisas and others stipulated in the Quran and Hadith. [Read Harakahdaily here and Utusan here]

Nik Aziz's son and Deputy Head of PAS Youth, Nik Abduh, who is aligned to the ulamak faction than follow his father's support for the Anwarista Erdogan faction, supported his Chief, Nasaruddin Hassan. The day before Nasruddin alleged that Karpal SIngh is out of line for ridiculing and underestimating hudud as in solving crimes. [read Utusan here]

This is despite Utusan's report that lecturer on International Relations, UMS, Associate Prof. Dr. Mohd. Noor Yazid viewing PAS and DAP will hold steadfast to their respective views on hudud for their political interest. [Read Utusan here]

Till then Dr Mahathir's political incision had left an indellible mark that could discourage PAS from playing the Islamic state and hudud as a major issue.

Subky Latiff, Nasruddin Hasan, and the gila bahasa (verbally mad) Dato Nizar Jamaluddin (all links in from Haraklahdaily) can scream and shout but their irrelevent voices only indicate desperation.

Because Dr Mahathir have got Anwar and Nik Aziz to be where he wants  them to be.... defensive. The ole master is at his defensive best on the attack. This way, Dato Najib and UMNO does not need to delve into this issue any further.

In the meanwhile. let's wait for an MCA onslaught on emperor Lim Kit Siang and son, the "arrogant" dear leader "Kim" Guan Eng.for their silence on hudud.

They can't claim to be consistent for a secular state but yet kept quiet and backstab Karpal Singh to leave him to fend for himself.

How will Soi Lek strike while taking into account the political game of his Kedah MCA Chairman and remain consistent too? DAP's first response on any issue is to highlight inconsistency and they usually nitpick on the present with some obscure past.

The PR Buku Jingga is nothing more than a charade to fool the unsuspecting. Always reminds me our local Portugese song, Jinggaly Nona.

The recepient to hudud cannon of punishment should be sodomiser Anwar and anak derhak Azmin aiskrim.

Im not sure how many people actually when to UAE, QATAR, SAUDI, etc... I feel much safer overthere... I can left my laptop unattended in the food court, without been worried. not to mention DSLR bag... I cant imagine doing it here in MAlaysia... so, is HUDUD cannot be accepted in Malaysia?

Maybe laptop and camera is of no value to those rich arabs.

To prove hudud really works, try leave a boy with a nice tight ass in an all men elevator alone. If he doesn't get groped from behind, i would belive anon 3:27