Bigdog hinted here yesterday that earliest date for Tanda Putera will be in November and the slot for September 13 release could have been taken up by other local film in the wajib tayang queue.

Strangely, today's NST put a report with heading "September release for Tanda Putera." On the contrary, the content mentioned the film director of Persona Pictures, Datin Paduka Shuhaimi Baba saying FINAS had hinted to her that the release would be in November.

If so, the conniving Minister for Information, Culture and Multimedia (MICM) finally got his way to delay the film's release and maybe meddle some more in the film editing.

The grapevine at FINAS were saying conniving Rais manouvred to sternly warn anyone whether at FINAS or Persona Pictures to not give Dato Najib of his wife, Datin Rosmah a copy for them to preview. That must be the only way left for anyone to make him change his decision.

If that is the case, he has taken his vindictive ways to delay the release of the film on the Prime Minister's father.

But now, why did the NST reported in such a way? 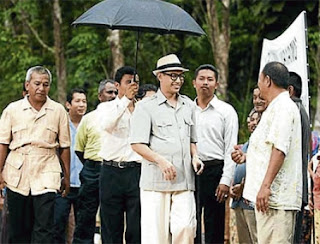 KUALA LUMPUR: DESPITE talk that her film Tanda Putera had its premiere delayed indefinitely because of its portrayal of the May 13, 1969 riot,  director Datin Paduka Shuhaimi Baba says this is not so.

She said Finas director-general Naguib Abdul Razak informed her that the film would do better if it was screened at year-end instead of immediately after Hari Raya.

"Finas said it needed time to promote the film as it is about an important chapter of history," she said yesterday.

The director has been aware of brickbats thrown from various parties in cyberspace, one of which is a Facebook page titled "We boycott Tanda Putera".

"It has been painful for us to receive such negative comments, especially from young Malaysians who made judgments after watching the trailer," said Shuhaimi.

Among the comments hurled at her and the film are "racist", "false depiction of 1969", "bringing up hatred" and "biased against the opposition".

Shuhaimi lamented that two of the film's actors, Alan Yun of Gubra fame and Douglas Lim, have been attacked on social media sites for starring in it, with some even calling for a boycott of their other works and endorsed products.

"It was not our intention to depict the violence of 1969 as caused by any one community or party. The film shows that violence occurred on both sides of the divide, and Malaysians breached barriers to save each other."

She said the scenes of violence were brief and were included to emphasise that the event was real and tragic.

"My team and I did a lot of research, such as studying documented materials and photographs, to make sure the scenes were backed by historical facts."

While there has been talk that the film's scheduled release delay was inevitable because of the coming general election, rumoured to take place around that time, Shuhaimi stands by Finas' justification.

"Tanda Putera is supposed to educate young Malaysians about 1969 and how Tun Razak and Dr Ismail worked hard to restore stability and unity to the country. It is through their sacrifices that we are now enjoying economic growth, progress and unity."

She said Finas did advise her to cut some dialogue and add scenes she had earlier omitted, but this would be done at her discretion prior to the film's release.

Tanda Putera's release will also be accompanied by a short documentary concerning the political figures of that time. It is set to air on TV and will be produced by Finas.

Actors Rusdi Ramli and Zizan Nin portray Tun Razak and Dr Ismail respectively in the movie, which revolves around the statesmen who continued to focus on Malaysia's industrialisation and modernisation despite their deteriorating health.

The RM4 million, 117-minute film uses CGI to recreate scenes of Kuala Lumpur and Malaysia in the late 1960s and mid-1970s.

It was filmed around the Klang Valley and Felda Lui in Bahau over 10 months last year with a cast and crew of more than 250.

They talk among newspaper people is that Rais Yatim pays the newspaper to get his story in and makes his irrelevant presence in the development of communication, information and culture felt.

What a way to support the mainstream paper, whose in need to improve circulation and advertisement revenues.

If there is truth to such talk, then this story of NST may have been intended to confuse the public into believing that all goes well and the film is due for release as scheduled on September 13.

It helps to douse the anger towards him for intervening and interfering with Government work out of alleged vendetta against established and reputable film directors for being vocal against him and making remarks that his sensitive nature viewed as questioning his ability and teaching him how to do his work.

In his old school view, Dear Leader Rais feels the people will forget this issue in two to three weeks time. For him. he has made the point to instill fear in all the film director and make them knell to the mighty Rais.

Unlike the allegation against him of having a tryst with his former Indonesian maid, Robengah that did not quiet down after two weeks of silence and ignoring the allegation, Rais like to believe that no one will realise that Tanda Putera will not be shown in cinema come September 13.

He thinks that he does not need to get such help like getting his counterpart in Indonesia get a written response from the maid and get an Indonesian dignitary audience with Tun Dr Mahathir.

Not this time because Malaysian and in particular, Melayu mudah lupa. These days even hot controversial public issues do not sustain long enough beyond a month.

This way any fallout to him personally is under control.

The Ministry and it's agencies does not matter, what is important at this late age and the dawn of his political career is that any potential major upheavel against him is under control and he can save himself for another term. He is aware of the public calling him an antique piece fit for the museum.


Already he has covered his dirtied tracks on this Tanda Putera film issue. He had brought the issue to cabinet, which means disretion on his part has been taken off his back.

It is the cabinet that made the decision to let the Film Censorship Board (LPF) decide hereon. While it looks as if Rais was embarassed to see his control on the matter taken over by Dato Hishamuddin's Ministry, he can tell the public that his hands had been wash of the responsibility.

Little do the public knows that when news broke out of Tanda Putera to be delayed release after the June 18th preview, Rais may have quietly pressured FINAS to replace Tanda Putera's slot quickly with other wajib-tayang films and Tanda Putera was made to queue again.

That way he gets his way of delaying the film release from September 13 and if election does not stretch till the end of the term and is in September, it will be release according to his wishes i.e. after election. The media and bloggers can scream injustice but he can sing Sinatra's My Way happily.

If his hands, which can be as long and graceful as the tentacle of octopus, reached the members of the Censorship Board, he may be able to influence them and retract the PG13 rating.

How dare the media, mainstream and alternative, dare to embarass him to give support to the producer? This will teach anyone else in the future, who dare to play to the gallery of the media and get on his ego, fear him.

This is something Rais is capable off and his political foe and former staff had stories of his vindictive and vengeful nature.

If anyone were to ask him as to why the delay, he can say that he did not interfere but it was FINAS decision to delay. After all, FINAS made press statement that more time is needed to promote the film and Hari Raya and Merdeka celebration are pack time.

But those in the know, knows that nothing gets done without Rais direction, consent and mark of approval. It is Rais that manouvre to see the mavie Tanda Putera and all those that went against his words and instruction to finance and support Tanda Putera will eventually be taught a lesson.

Rais is always right and when Rais is wrong, he can twist it to prove he is right.

He is losing grip on "Janji Ditepati" and everyone, including the press were instructed to stop writing and more discussion only embarasses the Prime Minister. In Tanda Putera, he is on top of the situation to the point that he had pre-empted any attempt to seek help from the Prime Minister or his wife.

It is believed that FINAS official was told that no one must give a preview or a DVD copy to Dato Najib or his wife, Datin Rosmah. He had frightened everyone in the Ministry that Prime Ministry and his wife are within his reach and grasp.

All the while, he had given the impression to those under his charge into believing that Rosmah is a fellow Negeri Sembilan-der and she will listen and support waghih like himself and his wife, Maznah.

He forgot that Rosmah would want the story of her father-in-law be told as soon as possible and hopefully it will have some desired viral effect on the youth's impression of her husband.

Will it be within Rais's "jangkaun kuasa saya" if Rosmah knew that his vindictiveess towards established film directors had made casualty of Najib?
at 8/04/2012 07:03:00 PM