Praise to Allah that in this holy and blessed month of Ramadan, this issue of higher hands, intervening in the public screening of Tanda Putera because of the paranoia of two museum pieces, seemed over.

Unless there is another bout of paranoia by the museum piece, which still has the power to do so, the film should find it's way to the cinemas on November 13. Not exactly September 15 but nevertheless an accepted and justifiable compromise.

Then there is the other museum piece to contend with. He is still barking and rampaging using his party's propoganda aparachik like dog and wild boar to stop the historical truth from being screened.

The basis of the latter museum piece's excuses is weak. And his scrambling search for excuses to criticise Tanda Putera, his glaring insecurity shows.

Before debunking his excuses and expose his glaring insecurity, we should read a report by The Malaysian Insiders (MI). 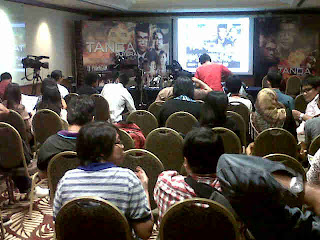 During Datin Paduka Shuhaimi Baba's press conference on Wednesday, MI with Malaysiakini, Free Malaysia Today and other pro-opposition online portal turned up in numbers and uninvited to focus on poking at the flagpole pissing scene.

Shuhaimi strongly denied the film accused Lim Kit Siang as alleged by their KOMTAR cybertroopers (Komtrooper). Why the fear?

Kit Siang: I was defamed on Tanda Putera’s Facebook page

KUALA LUMPUR, Aug 16 —  DAP’s Lim Kit Siang today said he remains unconvinced with the explanation by the director of the controversial movie “Tanda Putera”, saying that he had been defamed on its official Facebook page.

The film-maker Datin Paduka Shuhaimi Baba yesterday denied reports that the re-telling of the May 13, 1969 riots features a scene depicting Lim as having urinated at a flagpole of the then Selangor Mentri Besar Datuk Harun Idris’s residence.

Lim refuted Shuhaimi, claiming that a photo of him being “manhandled” with a caption saying he had urinated at the said flagpole “was posted in the album in the “Tanda Putera” Facebook titled “Peristiwa-peristiwa yang dimuatkan di dalam filem ini” (Events depicted in this movie).”

“Shuhaimi’s explanation that the creators of the film had received many photographs from netizens which were shared on the Facebook page, including the offending picture, and that it was removed…after complaints were received about the photo, is neither credible nor acceptable,” Lim wrote in a statement today.

He claimed “the defamatory and baseless allegation…was made by Tanda Putera official Facebook page itself, and not a ‘shared information’ from netizens”, adding that this gave a “clear impression” that the photo was taken from the movie.

“Unless there is a satisfactory and adequate explanation or accounting for the defamatory reference featuring me in the Tanda Putera official Facebook page, I reserve the right to take legal action against such defamation.”

Lim slammed Shuhaimi for taking “almost four long weeks” to tell the public that he was “not even featured in the footage of the film” since reports of it first surfaced.

Lim alleged that Shuhaimi’s slow response had allowed “UMNO/Barisan Nasional (BN) cybertroopers” to accuse him of “provoking” the May 13 riots “based on the movie’s alleged “urination” episode.”

“Even the photograph that was used in the movie’s earlier Facebook page was not a photograph taken in 1969 but was from a different incident in Sabah 15 years later in 1984.”

Lim said Shuhaimi should know that any “unfair…portrayal of the May 13 riots in…10 minutes is not only capable of overshadowing the rest of the 105 minutes of the film, but have the disastrous effect of dividing instead of uniting Malaysians,” said the Ipoh Timur MP.

“Do we want to continue to allow the May 13 past to haunt and divide Malaysians or do we want to move forward as one united people building a better and brighter future for all Malaysians, learning from the lessons of May 13?” he asked.

So Kit Siang is not convinced. Who cares?

When did Kit Siang and DAP ever convinced with any given answer by  Government leaders, or anyone they are up in arms against?

When did Kit Siang and DAP ever not response in their uniquely DAP style of counter arguing, as developed by him, by searching for irrelevant points from mistaken minor facts and minuscule inconsistency with the past or other events and then blow it out of logical proportion?

His response is no different than what he has been doing for the past 50 years in politics.

Kit Siang claimed he was defamed in the Facebook by photos from the past based on the presumed ""clear impression” that the photo was taken from the movie."

What happened to his earlier accusation upon the knowledge there exist such a film called Tanda Putera that he claimed he accused of being depicted in the flagpole pissing scene?

Despite Shumi's explanation, as expected, he will not find the explanation as satisfactory and adequate. Shumi's answer seemed to miss an important element i.e. time.

If Kit Siang claimed that “almost four long weeks” is too long to give an answer and slow response shows inability to answer and means cover-up, maybe he care to explain.

When blasted with the accusation in Parliament, he merely looked down and timidly kept quiet?

Talk about response must be right and fast, Shumi had answered all these but Kit Siang, his DAP supporters and Komtroopers refused to acknowledge and ignored her answer. Please do not hire deaf cybertroopers, okay Lim Guan Eng?

For Kit Siang to just remembered he was in Sabah, thus he did not provoke the riots, how will he answer to this comment?

One commentator by the nic of Ayah on Bigdogdotcom here personally witnessed "Lim Kit Siang sitting together with Tan Chee Koon on a lorry parading along Jalan Sentul, celebrating their election victory" before May 13, 1969.

And he dare to ask upon Malaysian to not be haunted by the past of May 13 which only divides Malaysian and it is time to move forward.

Is he genuine and sincere?

If he is genuine and sincere, he should have said those words when Dr Kua Kia Soong published his book of lies, "May 13: Declassified Documents on the Malaysian Riots of 1969."

Kit Siang promoted and used the wild deceptively substantiated allegations that the May 13 incident was a planned conspiracy of the highest order by the late and revered Tun Abdul Razak to enable the New Economic Policy be introduced.

Now it would seemed that he had genuinely and sincerely intended for Dr Kua's lies be taken as truth and be the last word on the matter, thus he is trying hard to make Tanda Putera fail.

If he is genuine and sincere to see the country move forward, let the truth or at least this more positive and beneficial interpretation of history by Shumi be allowed viewing and given a chance to find its way to the public.

Isn't that the freedom of expression and freedom of information that Kit Siang claimed to dearly profess and struggle for?

The Government has at least showed sincerity to move in that direction by allowing Namewee's nonsense film, Nasi Lemak 2.0 and upcoming Hantu Gangster unhindered showing. It now befalls on Kit Siang to be true to his words.

Otherwise he is a hypocrit.

Frankly, everybody should agree that Kit Siang and his band of Komtroopers were initially upset because they presumed Chinese was depicted as the aggressor in the film. 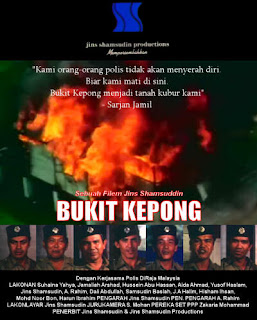 Why didn't they make a fuzz over Bukit Kepong which is a similar historical film that depicted Chinese aggression against Malay?

They didn't because they are not actually concerned for so-called Chinese image as linked to violence and aggreesion on the Malays. Maybe they are proud with that part of truth. It is likely because Tanda Putera depicts DAP in a bad light.

For Kit Siang and Rais, time has changed and the nation's life is moving and facing up to different challenges than this event of the past. After more than 40 years, May 13 should not happen again.

That is on the assumption that there is no intention on any party to subversively instigate towards the repetition of May 13. Because for many years, many observed similar pre-May 13 indications occurring now.

Could it also be that DAP is feeling the heat from guilt?

Even that, there is a major political apathy by the Malays.

The young and Malay market of movie goers will not come out from watching Tanda Putera and kill some of another race.

Even if theree is the small possibility of some coming out with certain emotions, it will not lead to any untowards incident. For almost all that come out of the movie, just give them tissue papers to wipe out their embarassing tears.

Heaven sake, this is only a movie and let's leave politics out of it.

That is the problem with the other museum piece that intervene to delay the film. It seem this museum piece is adamant that the movie must only release after the elections. If September is not the election as he think it is, he wants to delay it and risk FINAS to pay for compensation and open to possible lawsuits.

All due respect to our friend, Dato Ibrahim "Tiger", the film does not necessarily belong to FINAS as he claimed here in his blog.

FINAS is only an investor. Their slight majority interest does not mean they can do as they pleased. Persona Picture also invested money and their conduct as investor is governed by an investor's agreement that supercede the majority equity.

Ibrahim need to be reminded that film credit begins with "Persona Pictures presents Tanda Putera." Their name comes first so it is them that produced the film and have ownership on the Intellectual Property, thus meaning Persona Pictures own the film. FINAS was given leeway because they are the authorities.

But if they do not deliver their part as investor and become a hindrance to result in lost of money, like perpetually delaying release, expect all from FINAS till the top be sued in court.


Oh sorry, the museum piece talked about is Minister of Information. Culture and Multimedia, Dato Seri Utama Rais Yatim Phd. Let there be no more denial that it was Rais that mengacau.

It could only be Rais the currently enmeshed in three strikes of mess; Tanda Putera, Merdeka Day logo, slogan and song, and Evidence Act Section 114A. Heard rumours that he threatened to resign than relaunch as instructed by PM the new Merdeka Day logo. Ah ... please do.

The reason for being simply Rais is that anything happening in that Ministry must have Rais's hand. There is absolutely no reason and excuse to delay the film release.

Prior to shooting, it is heard that Persona Film sent the drafted script to Rais's Ministry, if not Rais himself, to vet and clear. They also made the initiative to send it to other Government agencies.

Our source in FINAS said they were involved in the film editting and four rounds of reeditting because FINAS agreed to the final print. 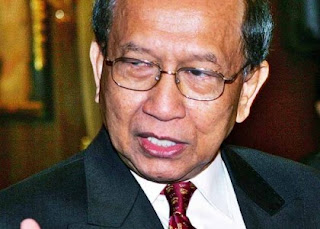 The only possibility left is Rais is at his natural vindictive self. 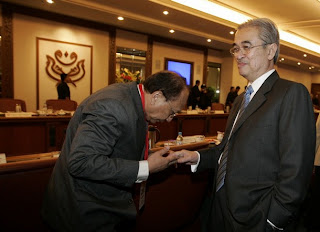 Another possibility is Rais is at his natural bodeking self.

The Film is certainly the attempt by UMNO o gain Malay symphty for the elecion.His was a vay cheap way to get Malay support .What about the Chinese.They become more upset?
May 13 is a history and all Malaysia know who to blame.

Chinese cannot forget how the police and Army use their might to kill some innocent Chinese.The Malay are vary happy.They always said padan muka.

I think the real culprit why the chinese and the Malay fight is the communist Party who inflatrated into political party.

I. Think the firm does more harm to racial harmony.