Are you ready for BAD MANNERS? Say yes, if you are DAP. 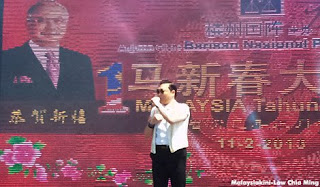 It is yet another holiday in multi-ethnic Malaysia.

For Chinese New Year, other than the compulsary family dinner to welcome the new lunar year, there will also be those open houses that has become the typical landscape of any Malaysian holidays.

Family, associations and political parties would jump in on the opportunity to touch base with families, friends, party members and voters.

With election looming in the corner, it is only natural Barisan Nasional decided to have one in Penang to touch base with voters and strengthen the resolve of it's supporters to vote in the upcoming general election. So did MCA, Gerakan, SAPP, SUPP and all the Chinese and non-Chinese political parties.

DAP would do the same elsewhere. In the past, DAP leaders have no problem attending the PM's or state Chief Minister's Hari Raya celebration.

If it is a political sin or unlawful to have a Chinese celebration in opposition territory, perhaps there should not be any DAP New Year celebration before this. But in a free and democratic Malaysia, anyone is entitled to organise their seasonal celebration wherever they want and with whomever they want without disruption and disturbance from others.

However, since DAP captured Penang, things are changing. It does not reflect the comfort, security and freedom DAP promises it's supporters in their political rallies.

This change in attitude was ignited by the Chief Minister, Lim Guan Eng as he encouraged his supporters to come and sabotage the BN New Year event:


Before attending the New year event at Hian Chiang School near Bayan Lepas on Monday afternoon,  Prime Minister Dato Najib was in Penang a day earlier. 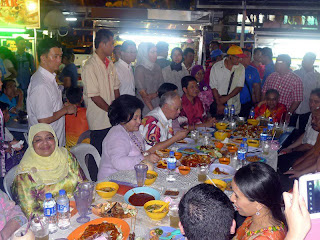 At night, he and his family went for nasi kandar dinner at the popular nasi kandar known locally as Nasi Kandar Beratur for it's long queue. 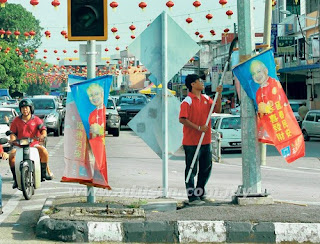 Despite the large crowd and entourage, everything was fine and peaceful although prior to the Prime Minister's visit, the local Majlis Bandaraya Pulau Pinang (MPPP) or Penang City Council had removed all the CNY greeting banner.

It was a MPPP big operation supposedly on the instruction of the Chief Minister believed to involved 2 MPPP trucks, 5 motorbikes and a 4-wheel Kembara to scout and clear off all apolitical New Year greeting banner from McCalum Road to Bayan Lepas.

Things became different the the next day.

In his walkabout around the Gurney drive area, a Chinese male threw an exploding firecrackers near the area the Prime Minister was having his meal. 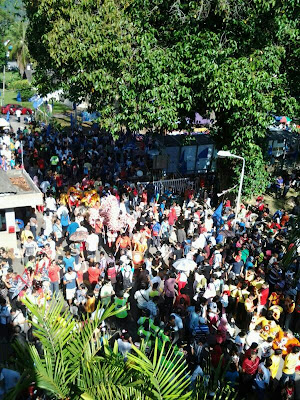 In the afternoon, as Dato Najib was arrived at the gate and entering the Hian Chiang School, a male Chinese threw his polystyrene rice packet at the him but missed to hit an unlucky by stander.

These are still isolated events that could merely be personal anger but increasingly suspected to be part and parcel of attempt to sabotage the PM as advocated through Lim Guan Eng's politics of hate and racism.

As we said in our earlier piece of the cheap attempt by DAPster cybertroopers to embarass the PM, it is DAP operatives at work.

One only need to see how the tried to embarass the PM's speech using false impression created by their video recording.


Off course, it would turn out as though the crowd is calling "No!" when the recorder is merely recording their "No!" exclamation. Was it so?

Hear another recording, below:


The microphone picked-up the majority was still calling Yes for BN.

This is no big deal. It is all political psywar that have minimal bearing. Isn't this all unnecessary?

What is Ubah politics advocating? Rudeness? Ungentlemenly or unlady like conduct?

If one is a DAP supporter, one has no business of going to a BN function. If one decided to go to spy on the event, there is fine but just see and observe. No need to disrupt other people's event.

This is just indication that the politics advocated by opposition is for a coup d'etats like Arab Spring in Egypt, Libya, Tunisia, etc.

Dr Mahathir and former IGP, Tan Sri Musa Hassan has already said it loudly that Pakatan Rakyat is moving in that direction and disrespecting the wishes of the people.

This new bad behaviour that is not typical of Penangites did not just limit itself to politics, but beyond. 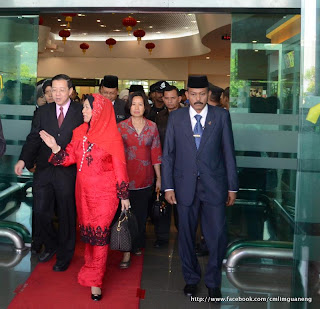 The Permaisuri Agong was in town and Lim Guan Eng decided to not accept the invitation from BN but was at the airport to greet her majesty.

A Chinese male was seen to be giving obscene gesture to her Majesty's convoy. A policeman warned him and his response was to put in simply as "seditous." If the laws were not repeal, he should have been in the slammer.

Read about the incident, The Unspinners here and the various links.

Penang had been our favourite spot for R&R for many years. But if this is reflective of Penang under DAP, then it is really sad. Penangites are one of the most friendly and fun people around with.

This is just bad manners. No Malaysians should allow this to continue. Punish those with and advocating such behaviours.
at 2/13/2013 05:11:00 PM

Actually what the tokong and the dapigs is doing a really great favour to the electorates from the perpectives of the fence sitters, the members of pas and towards the majority of the malays.( bear in mind, members from PKR also got malays mah) I'd say thank you to the lim's family, its all backfired. Well done.Now, we/ they have opened our eyes wide. There is no amount of damage control can be put together now, because its spiralling out of control tawards the disadvantage of the dapigs. The tokong started it with the Allah issue, he lost out of favour to all muslims/malays in this country, now the with hatred indoctrination issue in penang, you losts grounds towrds the whole of Malaysia. The blunders did by the new "outcasts that does not belongs to the Kadazandusun" is also another shot in the foot by the father lim and the BABI. Dont deny by calling the babi and just because he says no, that father lim buys it. Sheesh, a liar always lies, and they always flock together. Kantoi, bapak lim and the fool of a liar. Wish that you lands in KLIA or LCCT wearing that Hougan Siau outfit.

that TONGSAN- MARI culture will never fail you. They can put on the trendiest brand, their women can go to the most expensive Spa there is, bleach their face yellow...will still walk like a duck and mouth smell like LONGKANG. Worst than this are the LAME Melayu buta bangang tak ada personality smelly cibai ass-licker!!

MCA try to be a chaimpion in Penang.It will take them another 30 yaers.
My bet this GE 13 ,will wipe out MCA and Gerakan completely.

Did you read DEepak latter to Mahathir.?. Oh My God.O wonder my friend in 1 MDB told me Mahayuddin stareted asking what happen in 1MDB with all the money guarantee by govertment.?

The power of rakyat said...

what ever yours is yours but dont put sand in others rice bowl, altough everybody knows Penang doesnt belong to your family.

Dap are getting more kiasu than the Pap.

Since the DAP took over Penang, I have stopped going there for vacation. Good decision, I suppose.

Actually it's good that Najib asked that question. Now he knows that only UMNO candidates should contest in all of Penang for the Malay votes. The Chinese vote are pretty much gone.

Sorry bro, but Najib asked the crowd a question. They said no.

If the crowd was pro BN, they would have said 'yea', instead of the resounding 'no' which we saw...

And what claims about "apolitical greeting banner"? The photos in your blog even show those banners with BN logo!

The DAP is just a sub-branch of the foreign PAP without Lee Kuan Yew's academic qualifications which failed him in his one-man over 50 year rule of Singapore, a failed state which has to be topped up with very rich foreigners.

The Malays and the Bumiputras must not allow the UMNO to fall. This applies to all non-Malays. We will all be in trouble if this happens.

Lee Kuan Yew is the tail that wags the dog. He uses the proxy DAP for his own ends. Beware all Malaysians !

I hope those muslims who support DAP actions, may allah have mercy on them. Personally, i think DAP has gone overboard with their immaturity & inconsiderate actions. Still i'm amazed with the people who condoned with the actions. Such an embarrassment.

The DAP tries to copy the manners of its master Lee Kuan Yew of the failed state of Singapore.

You have Totally missed the Point.

ITS ABOUT PM NAJIB BEING MADE A DONKEY ON STAGE BY MCA!!!

PAS do not be used by the DAP aka PAP of the failed state of Singapore.

Read the New Straits Times Saturday 16 February 2013.Page 29.'Protests put S'pore at political risk' The Star.Saturday 16 February 2013 Page 25.Seah Chiang Nee Column.
5,000 persons protested against the Singapore White Paper on Population. The DAP had not got the academic credentials and intellect of Lee Kuan Yew who ruled as a one man over 55 year ruler of Singapore. His policies failed. The DAP will do 10 times worse in Malaysia. Go home DAP!

What Dap is proposing is of course wrong but i dont see any problem with guan eng entouraging the queen. King and queen is priority rather than the pm and his wife

The DAP which is founded and inspired by Lee Kuan Yew of Singapore does not deserve to be supported by us Malaysians or the two Malay Opposition parties. DAP is as foreign as apple pie !

The DAP does not deserve our votes as it was founded and inspired by Lee Kuan Yew the one man ruler for over 55 years of Singapore. It is closely connected with Lee Kuan Yew and the PKR and PAS should review their relationships with such a foreign connected DAP.