In Anwar or Reuters we trust? 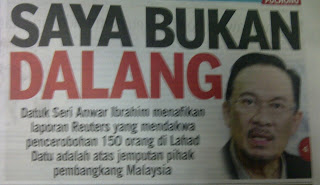 Sinar Harian frontpage yesterday was tasked to defend Anwar Ibrahim from allegation of involvement in the Lahad Datu foreign intrusion.

On February 19th here, this blog wrote of Anwar in desperation to be Prime Minister and will use his last straw to stage a "Malaysia Spring". The incident in Lahad Datu looks to be part of the plan.

Along the way, he could use the opportunity to ridicule the defense establishment and frustrate the servicemen. Hopefully some votes from the hard to crack military and security sector could trickle his way.

In the short time, it would ridicule the government reasoning in the RCI that the issuance of citizenship was justifiable. For Sabahan with animosity towards immigrants, the intrusion only invoke their anger towards Barisan Nasional government.

If his act is caught, it could spell disaster to his politics and himself. He could be hanged for treason and jeopardising national security.

Any coup, be it coup d'etat (or military coup) or popular uprising (revolution), someone must bankroll it and there is a military element. Anwar could be attempting a coup with the possibility of a small military backing.

The incidents in Southern Thai and Lahad Datu could be linked to this.

The incident in Lahad Datu is slowly revealing Anwar's treasonous act against the country. He may not fear the possibility of being found guilty for treason that amounts to a death penalty because he does not believe the government dare put him to trial.

It only makes him a martyr, dead or alive.

His only fear is the voters believe in his involvement and outrightly reject him. It is only natural that he denied Reuter's report.

Extract of the February 14th Reuters report reads below:

A high-ranking Malaysian government source with direct knowledge of the situation told Reuters the gunmen were suspected to be from a faction unhappy with the Philippines' recent peace deal with the main Muslim rebel group.

Raul Hernandez, a spokesman for the Philippine Foreign Ministry, said his government was trying to get information about the incident and was in touch with Malaysian officials.

A senior Philippine military official said navy boats and an aircraft had been sent to the border area. He dismissed the Malaysian account of the group, saying they were unarmed Filipinos who had been promised land in Sabah.

He said a meeting over the land claim had attracted a large crowd and drawn the attention of Malaysian authorities.

"We know that these people arrived there five days ago and most of them are from nearby islands," said the official, who asked not to be identified.

"Some of them were already residents in Sabah for a long time and they normally cross the border without any problem."

Another Philippine military officer said the men were followers of the heirs of the Sultan of Sulu - an island group off the southern Philippines - who had been invited to Sabah by a Malaysian opposition politician to discuss land issues.

Malaysia pays a token amount to the Sultanate each year for the "rental" of Sabah state - an arrangement that stretches back to British colonial times.

The number of illegal Muslim immigrants from the impoverished southern Philippines has surged in recent decades, stirring social tension with indigenous Christian inhabitants in Sabah.

The Philippine government signed a landmark peace deal with Muslim rebels late last year to end a 40-year conflict in the south, but some factions have voiced opposition.

Reuters is one of the most respectable news agency and seldom provide report based on undisclosed sources. The occasional situation would be in such tense military situation where official statements are hard to secure and the only information given ahs to be in confidence.

However, Reuter's journalistic reputation for integrity and reliability will give credence that there are such sources.

One can read Anwar's denial and his usual predictable response to accuse Reuter's report as the work of UMNO here.

How could it be the work of UMNO when Reuters reported it as from a Phillipines military source which defers from the rather hold back Malaysian military information?

Do consider that he has yet to answer honestly questions such as on his alleged missing Omega watch in the Chinadoll video scandal, refusal to provide DNA sample, disallowing DNA test on Azmin's daughter, and answering Wikileak revelation of his deposit with Singapore branch of an Israeli bank.

On February 16th, The Phillipines Star portal here reported that this group is linked to the MNLF and Nur Misuari. An extract of the report from Manilla reads below: 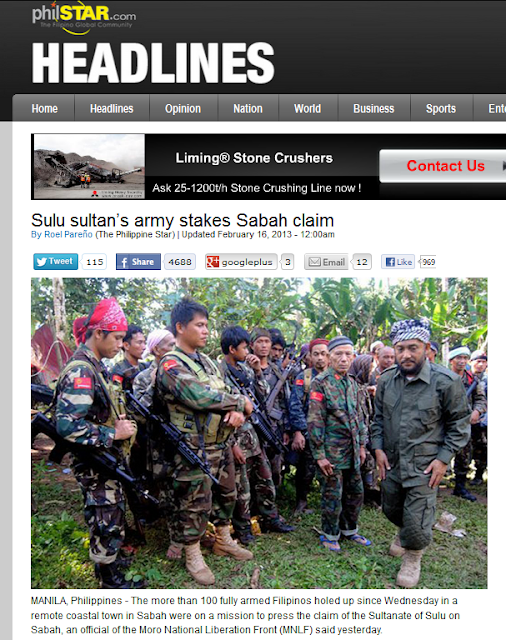 A ranking military official said MNLF chairman Nur Misuari orchestrated the standoff to attract the attention of the Philippine government and the international community.

“It has something to do with Misuari’s continuing claim of Sabah being part of the Philippines. Misuari just wants to show off. The MNLF may have forged a peace agreement with the government but Misuari has not given up on his claim of Sabah,” the military official who declined to be named said.

He said the so-called Royal Sultanate Army began to recruit members in the early 2000s.

“The following years they never gave the Philippine government any problem until this standoff in Sabah. The Royal Sulu Sultanate Army has been behaving well since then, until they went to Lahad Datu and declared they have the right to stay in Sabah,” the source said.

“It was even what we call in the military an acoustic war as no bodies of the dead turned up but only sounds of weapons being fired,” The STAR source said.

He said Misuari attempted to seek refuge in Sabah after his men launched attacks in Zamboanga City.

[Read also this report here where he justified his action and passed the responsibility on the Malaysian and Phillipines government.]


“But always the Malaysian government turned him over to the Philippine government,” the source said. “That is why Misuari would always be bitter against Malaysia.”

Foreign affairs officials said they were informed by Malaysian Foreign Minister Anifah Aman yesterday morning of the ongoing negotiations with the armed men, who identified themselves as members of the “royal army” of the Sultanate of Sulu.

The Phillipines miliitary sources reported has established that they were invited by a Malaysian opposition leader and this group is orchestrated by MNLF's Nur Misuari and linked to an attack on Patikul, Sulu.

What does that logically got to do with Anwar's allegation that it is UMNO's hands at work?

The Manilla Times news portal dated February 24th viewed it as the work of members of the Sultanate of Sulu and MNLF. Extract below: 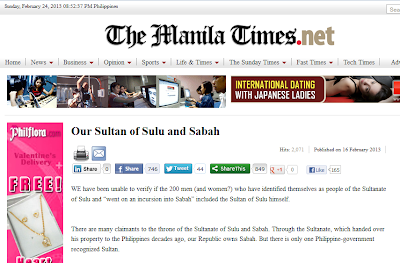 Malaysian officials earlier suspected the intruders to be members of a Moro rebel group, but Philippine officials said they were unarmed Filipinos who had been promised land.

The drama on Borneo island has threatened to stir tension between the Southeast Asian neighbors whose ties have been periodically frayed by security and migration problems caused by a porous sea border.”

Meanwhile, our Mindanao Correspondent Al Jacinto’s report, also confirms that the “intrusion” is being handled competently by officials of both Philippine and Malaysian governments.

Jacinto’s writes that “reports said the men are members of the Sultanate of Sulu and North Borneo and the Moro National Liberation Front (MNLF), and that some of them were armed, who are active in the campaign to reclaim the Malaysian oil-rich island which is part of the Sultanate.” 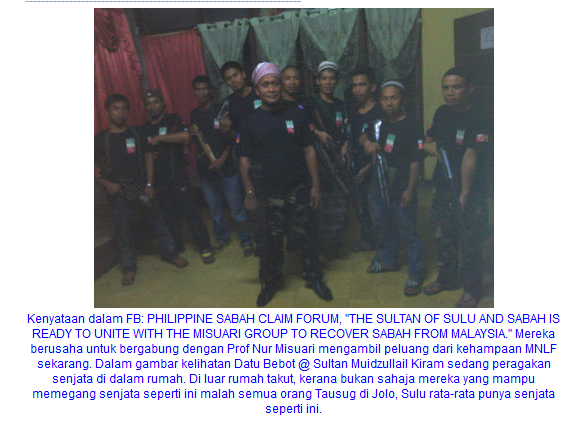 Nur Misuari was reported in some pro-Sulu Sultanate blogs to have met in October 2011. That is certainly a long period to collaborate a course of action.

A confirmation of the collaboration is the picture above taken from the Kesultanan Sulu blog here. It also shows Jeffrey meeting with the claimed Sulu Sultanate for discussion and seeking mutual ground of interest.

Anwar did promised autonomy for Sabah but his offer was criticised heavily by Dato Dr Jeffrey Kitingan, the leader of the STAR granted Sabah. He claimed that Anwar's offer is merely lip service and not in tandem with the true meaning of autonomy. [Find it on Malaysia Today]

Sabah has some level of autonomy in the sense that it has control over land, it's own native court on cultural and freedom of religion albeit in accordance with the stipulated laws. They also enjoy a different land code than Semenanjung that is more advantageous in securing oil royalty.

Anwar had collaborated with CIA operatives in Phillipines who were training Jeffrey's armed Kadazan gurilla to seek an armed Sabah secession. Moro liberalition group had leaked the information to Kuala Lumpur and Jeffrey was held under Internal Security Act for two years.

Years later, Anwar was later removed as Deputy Prime Minister and President of UMNO. [Link to be provided]

Anwar and Jeffrey tried to work together in PKR but both got into collision course when Jeffrey was denied to lead Sabah PKR.

Jeffrey left to lead a new party and will contest in 40 of the 50 state seats. Anwar is struggling in Sabah to dethrone BN with a divided Sabah opposition and his own PKR grassroot at odds with partners of Pakatan, Dato Lajim Ukin-led APS and Dato Wilfred Bumburiang-led PPPS.

This piece of history only shows that Anwar was willing in the past to allow Sabah out of Malaysia. Thus, working for the Sulu Sultanate and Nur Misuari to reclaim Sabah to forego Sabah is nothing new for Anwar. 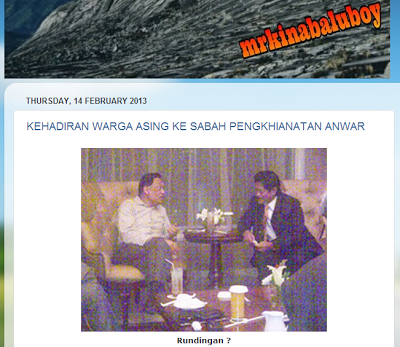 He was seen meeting Nur Misuari. The pictures are all over the blogs. MrKinabaluBoy posting here was  republished by other blogs. The only way Anwar can deny such a meeting is to claim the picture is another case of mistaken identity as in the China doll video?

It is not easy for Anwar since there is a motive.

With both having a common enemy in Najib and the Malaysian government, the possibility of Nur Misuari collaborating with Anwar cannot be discounted. It is not totally absurd to say that Anwar could have promised Sabah to Nur Misuari too.

Thus, Anwar should explain the picture and make known of what  transpired in their meeting. It is incumbent on him to do so. A simple denial is insufficient to dispell the credibility of reports leading to his involvement in the intrusion.

As far as the legitimacy of the Sulu Sultanate to claim Sabah, follow this video by published on Dave Avran's blog here as below:


There are a total of 60 claimants for the throne of Sulu. Another Malaysiakini video shows there is no basis for the Sulu claim on Sabah:

Nor Mishuari should be the sultan of sulu and then appoint Anwar as his prime minister.

We trust ANwar. YOur propaganda made Anwar looks like superhero capable of doing so many thing. He is the agent of US, China, SIngapore or even Israel. Make him looks like a James Bond. Also you make Dr M like stupid fool or someone incapable of knowing what his subordinate action.

The Opposition before they attain power should declare they are like Caesar's wife beyond reproach. Talk. Talk. Talk