Now that Dr M lowered the boom, we don't have to talk of Flora Santos 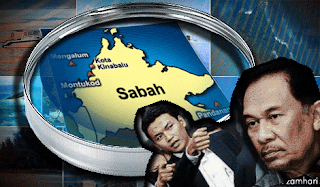 The RCI is Sabah is slowly unravelling more and more the real happening behind the age old allegaton of citizenship-for-votes.

Quite a lot of information have been given and it should dispell the simplistic allegation being bandied around, which originated from insular "Sabah for Sabahan" thinking Sabah politicians like Dr Jeffrey Kitingan.

Somehow Sabah media seemed uncooperating or perhaps cooperating with the opposition. If the opposition is trying to play up this issue of illegal immigrants, Raja Petra here gave this warning:


Hence I would be very careful about how the opposition plays up the Sabah issue because if the truth were to emerge it may cost PKR a lot of votes in Sabah. And if they can’t win Sabah then they can’t form the next federal government.

The Sabah media seemed to be trying to fit the RCI information to their age old belief and intentionally holding out information. It is more apparent among the wider reach radio media.

In the case of Dato Seri Anwar Ibrahim's involvement, few have made innuendos but none have shaken him. That is till Dr Mahathir lowered the boom on Anwar to accuse him of involvement in the illegal immigrants case in the 1990s.

Dato Abdul Kadir Jasin [in his blog here], Dr Jeffrey Kitingan [read MyMassa here] and Dato Salleh Said Keruak [read Sabah blog here] have been instigating Anwar Ibrahim to appear at the RCI where he claimed he is ever willing.

Anwar pretend to be in the dark. He claimed he was not in charge of Immigration, NRD and police. [Read in FMT via MT here]

Initially, he was angered with attempts to implicate him and he vent it on Dr Mahathir. He became personal and tic. So we tac him back hard here.

The article revealed that Anwar had a role in toppling Tun Datu Mustapha and that lead to the death of USNO. So those sentimental former USNO should stop their blame game and stop working with their enemy.

With the demise of USNO, UMNO entered Sabah. Although the charge in was led by Ghaffar Baba, eventually Anwar caught up and build his own network of power and influence using money to entice the easily bought Sabah politicians.

He appointed the son of an immigrant from China to be Sabah Chief Minister. He became rich from the oil palm estate labored by illegal immigrants and not KDM workers.

Through all this, Anwar had an affair with someone in Sabah. No worry PR blind loyalists. Anwar had a tryst with a Sabah singer and not a boy. 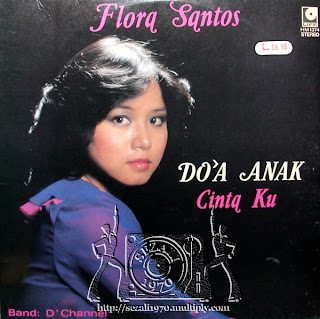 If it requires revealing it was Flora Santos to get the attention so that proper information being revealed in the RCI and Anwar's involvement is diseeminated, then we shall.

With Dr Jeffrey, Salleh and Kadir, Anwar can still wiggle his way out but not when Tun Dr Mahathir outrightly said Anwar was involved. When Dr M speaks, people listen and take notice. Now Sabahan are reminded that Anwar was deeply involved.

Serve him right for trying to get personal with dr Mahathir.

Opposition leader Anwar Ibrahim was directly involved in the project to issue citizenship and identity cards to unqualiified immigrants Sabah in the 90s, though without orders from him, claims former prime minister Dr Mahathir Mohamed.

"He normally takes the initiative and sometimes does more (than is required)," Mahathir told a press conference in Kuala Lumpur today.

"What happens on the ground is often different from the directive (from above)." 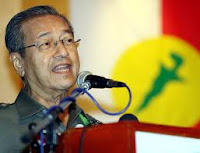 Mahathir said Anwar (right) and the implementing officers on site in Sabah at the time took matters into their own hands and were not necessarily following instructions from the chain of command.

The veteran politician noted that the government had taken action against those officers involved.

He was asked to comment whether he ever ordered Anwar, then his deputy, to issue ICs to unqualified immigrants in Sabah.

"He had a hand in it," alleged Mahathir adding that what happened may have included illegal action and abuse of process.

The former PM added that while he may not have evidence that could be adduced in court, he "has knowledge" of the possible wrongdoings by Anwar.

Asked how a strong prime minister of a strong government like his could have a deputy and underlings running around not following orders, Mahathir said that even if Superman is a prime minister, he will be hard pressed to be able to look at everything.

He said that he would testify before the royal commission of inquiry (RCI) into illegal immigrants in Sabah if called.

Allegations of Anwar's involvement in handling the Sabah situation ran rampant when the opposition politicians began to call for an RCI into the immigrant situation in the state.
State BN leaders immediately came out decrying Anwar as the one behind such sheenanigans when he was Mahathir's deputy, though the allegations were downplayed by the opposition leader.

However, both sides agreed that an RCI was needed. Bipartisan pressure made possible the ongoing hearings into allegations that unqualified immigrants were handed out citizenships and ICs by those seeking electoral support from the grateful, newly-made citizens.

Raja Petra was right. Be careful what you wish for.

Tun Mahathir have given much hand to help the government from being embarassed by their sincere attempt to lay to rest this age old issue of Sabah. However the Sabah media seemed to have sinister intention.

When we raised of newspapers in Sabah trying to incite the KDM community with this issue, we suspect that the Sabah media is colluding with the opposition.

Much of the revelation of the RCI is being held back by Sabah media.

It was obvious when the newspaper blowed out the testimony of former ISA-ed NRD officials claiming 73,000 citizenship being given out and there was an operation at the home of Tan Sri Aziz Shamsuddin.

Not much publicity was done by the Sabah media to the fact that 446,173 illegals were deported since 1990. [Read the Malay Mail report here.]

Or the solution to the illegal immigrants started since 1979-84 phase.

The Sabah media highlighted Muslims were given citizenship but kept quite on the fact that Sabah also has problems of illegal immigrants from Papua New Guinea, Soloman Islands, Toraja and Timor Leste. [Read MyMassa here]

TV3 did a dry run test on GE13 last weekend.

Not much time left for both side to cover whatever they need to hide.

make sure you are free on 30th Mac Saturday.