The case for a Mukhriz vs Azizan showdown 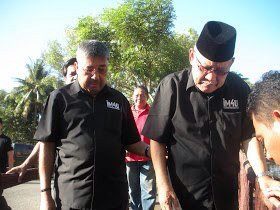 Recently, Kedah Menteri Besar was criticised heavily by PAS supporters for attending the official launching of the My Beautiful Malaysia campaign by the Minister for Housing and Local Government, Datuk Seri Chor Chee Heung at the Gunung Keriang Recreational Park.

The son of the former Director of the PAS's controversial Koperasi Kohilal, complained that while the PAS grassroot are tirelessly working to bring down Barisan Nasional, Azizan was promoting BN Youth on TV.

Azizan can be politically naive at times and have been criticised as not funneling public work to PAS cronies. In the middle of last year, criticism reached to a point where Azizan was facing revolt and attempts to topple him from among his state exco members like PAS former exco, Datok Fakhrolrazi and Dato Taulan.

Now rumour is strife that the recent incident could put Azizan to be another possible victim like Dr Nasharuddin to be unceremoniously removed for any hint of cooperation with BN. Fanaticism and politics of hate in PAS is at a new hieight [Read our previous posting here.]

However, despite the barrage of issues facing the PAS Kedah administration and Kuala Lumpur headquarter, the odds is still stack for an Azizan candidacy.

In mid-2011, University Utara Malaysia was commissioned to conduct a detailed survey on the Kedah political landscape. The survey was done in three phases and ended by mid 2012.

This is no Merdeka Center or UMCEDEL surveys where sample size is usually being questioned. A random sample ivolved 300 registered voters from each of the 36 state assembly areas, thus making it the largest sampling for any similar survey done..

Just do the maths.

The race, age group and various social indicators were taken into consideration. Excluded are committee members of any political parties.

There were 24 questions in the questionaires to investigate voters perception on the various political issues, overall leadership qualities, performance of current government and down to teething issues facing thoir daily life and their expectation.

One prominent question was "If BN winds Kedah at the 13th general election, who should be the Menteri Besar" and likewise for the case of PAS.

For PAS, Azizan scores the highest with 56% rate of approval with Fahrolrazi at a distance second with 30%. Unless the so-called Tok Guru, Dato Nik Aziz has his menstrual cycle coming, PAS best bet mathematically is still Azizan.

If PAS decided to have a different candidate, it could be disastrous to have a candidate not endorsed by Azizan. That rules out Fakrolrazi and Taulan and raise the possibility of Dato Amiruddin Hamzah.

That only put us personally in a difficult spot because it is the choice between two friends.

The survey finding placed the highest score for Mukhriz as MB at 75%.

With Mukhriz in the formula, BN leads the current PAS government by 55% to PAS's 45%.

The only uncertain lies with Chinese community which responded very cautiously and are non-committal over many questions asked. For that, we like to refer to an old December 2010 posting on the shifting support of the Kedah Chinese business community here.

Perhaps, the survey volunteer did not get their trust.

Mukhriz understand business and should get the respect and trust of the business community better than Tok Lebai Azizan.

Whilst, the Indians are back to the 2004 level support for BN with a compromise agreed with Hindraf. 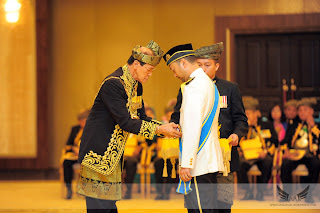 Perhaps it is only a survey.

In the last birthday honours given out in commemuration of the birthday celebration of the Sultan of Kedah, Mukhriz was honoured with the higest honour of Darjah Paduka Seri Setia Sultan Abdul Halim (DHMS) from his Majesty.

This is not to imply that his Majesty the Sultan of Kedah is being referred to give his blessing for  UMNO Kedah's proposed candidate for MB. That would tantamount to confirming the istana's interference in politics and administrative matter.

However, that honour has it's significance in view of the remarks his Majesty had made of the present crop of UMNO Kedah leaders. We won't dishonour his Majesty by revealing what was said, to whom it was said and what occasion is was said.

Lips or can we say ... fingers are sealed. Biar pecah perut tapi jangan pecah mulut. (May the abdomen burst but not the lips). Our sources is safe. No lawsuit or court could force us to reveal.

For Mukhriz, whose career in UMNO politics has not been astounding and his position in the cabinet is only at Deputy Minister level, it means much appreciation, pleasure and hope from his Majesty towards Mukhriz.

Some have already speculated that by that honour, if BN wins, the Sultan's preference (in which the Sultan advise is usually sought) would clearly be Mukhriz.

And Amiruddin is one of Sultan's golfing partner. 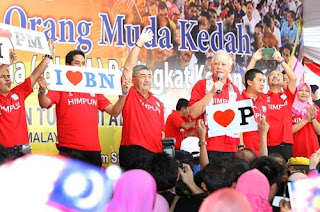 Another part of the survey mentioned that a significant number of voters surveyed wants a new young face. If it remains the same old warlord, BN would lose.

That means the Prime Minister and UMNO President, Dato Najib Tun Abdul Razak would have to totally rule out the like of Det Khalid or Dato Mahathir Khalid. For heaven sake, not the likes of Dato Johari Baharum or Jo Derhaka.

Najib has given the signal that he listens.

In his recent visit to Kedah, he gave a special attention and media gave a special coverage to his event with BN Kedah Youth. An extract of his off-the cuff speech from this blog here reads:

Will it be Mukhriz versus Azizan?

Kedah will be launching it's #Save Kedah campaign on the Febrary 9th this Saturday. By today, BN Kedah will know who has been appointed as Director of Election for Kedah i.e. proposed Menteri Besar.

PM's backing is what the Mukhriz machinery needs to get started in this hostile land of the cah keting, more subtle in it's play but more brutal than Kelantan. Even octagenarian stateman Dr Mahathir was a victim. Now we've written before on the sabotage of desperates here.

Many viewed him as a timid politician but most capable candidate to resolve Kedah's mountain of problems from 5 year of a simpleton Tok Lebai adminstration.

Mukhriz is doing well in MITI that he has earn the respect of many of his father's own perennial foe and critics. For all his shortcomings, Mukhriz has the ability to learn and at the same time, maintain his principle and keep his integrity intact. That is a trait that is scarce in today's politics.

Anyone familiar with Mukhriz in his business dealing knows he is quite willing to work his way up and when it is advatageous, he knows when not to be a nice guy and be shrewd.

He is quite capable of taking those claws out of his paws. Never forget that he has one powerful political advantage that will be useful to overcome obstacle and that is the influence of Dr Mahathir.

Whether his father will be fully involved with his campaign, it is not known but his support does wonder. Azizan is quite friendly with Dr Mahathir but naturally, he will not likely get Dr Mahathir to campaign for him.

In the last general election, BN lost Kedah to PAS for refusing to seek his acknowledgement and Kedah voters decided to teach Kedah UMNO a lesson for treating Tun Dr Mahathir badly and deny him a seat in the UMNO's GA as G7 delegate.

The grassroot rejection was obvious that when only about 100 people turned up at a political rally attended by Pak Lah in Kuala Kedah.

In this stiff and trying election, BN will surely need to garner every possible support, including and particularly that of Tun Dr Mahathir, if it is serious to recapture Kedah.
at 2/07/2013 06:49:00 PM

It is obvious that 10 casino licences will be issued to Pulau Pinang if the PR comes into power in Putrajaya. Other on-line gambling facilities approved like the squeaky clean Singapore's world biggest football rigging and fixing matches agency based in squeaky clean Singapore which was caught by the Interpol to the consternation of the World Community world-wide. Who cares ? Popular demand by the Chinese. Revenue and revenue needed for infra-structure development. The future for Pulau Pinang under the PR is obvious !

I think you are caught in a political time warp in the past.

Neither Muhyiddin nor Najib wants another internal fight within UMNO. It will destroy umno.

Much talk of muhyiddin to take on najib, if he fail to secure 2/3 majority, was first mentioned in the open by Anuar Mohd Nor of UMNO Reform ... fire starter PKR spy within UMNO circle .

Recently Mahathir defuse such talk by mentioning it.

However, the talk of muhyiddin taking on najib originated from witin najib"s fold .... his kaki bodek.

If najib is smart, he will not fall for it but chop of those instigators around him.

Najib has to relook many of his advisers who seemed to be destroying him than helping him.

He has to clean up his cabinet from th elegacy of both mahathir and dolah tido.

he maybe not as a good as politician but he is what the peple want. who is to deny them?

you dont want mahfuz omar as mb, do u?

As a Chinese, I like Najib. But I don't like his wife. That woman is an albatross around PM's neck. Hence my vote is undecided. Definitely not I-am-holier-than-thou DAP.Or welfare state advocator PAS. Those Arabs wanna be is just idiotic.
Mukhriz...appears too sombong, unfortunately.
Muhiyuddin doesn't look smart enough for the PM role, should BN be denied 2/3. Mr Muhiyuddin? Can tell your son-in-law and anak-anak to tone down their extravagance? Alahai who sighs at having 80 luxury watches and don't know what to with them? Just remember your wives, kids and relatives bodoh sombong can you be your biggest downfall especially in the age of Internet. Rakyat hears stories like those (they don't care if it true or not, they just assumed it's true) they'll be like wtf.
UMNO needs to get rid of sychopants and free loaders.