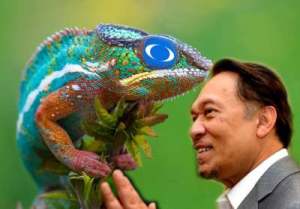 
However, all those actions he wants to do and other precautionary and pre-emptive actions have been taken by Lynas and the local authorities

Lynas is DAP's baby to make entry into Pahang. It was one of the main issue raised in the so-called NGO driven Himpunan Rakyat 112. They are adamant to go against Lynas irrespective of the reasons put forward.

Since green was the anti Lynas calling colour, let's go green too. Don't call it turnaround in position or change of stance, but go green and follow The Economist description of Anwar as Chameleon.

Anyway let's not get too loud in discussing this issue. It could be another of the many diversion he employed to detour attention from Lahad Datu incursion that is all negative to him. 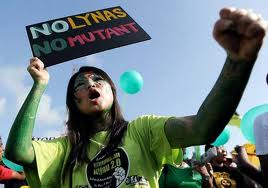 Lynas is the issue championed by those DAP supporters disguised in green coloured T shirt and have been rampaging into Gebeng, Kuantan, Raub and Pengerang.

They ignored reasons to demand for removal of the Gebeng's Lynas rare earth plant despite the plant being  verified as safe by independent experts and authorities.

Around the country they went to lie to the public by accusing rare earth is radioactive. Basic periodic table will show it is not.  But they insist they are right with all sort of scientific claim

When they appeared before a public hearing by the Parlimentary Select Committee (which opposition members like Tian Chua boycott to avoid the embarassment of the truth), they can't give any expert name or reference to their claims on the Gebeng plant.

Since failing in Gebeng, they have failed and is being sued by the Australian owned gold mine and making ruckus with Salahuddin Ayub of PAS at Pengerang, Johor.

But, what are they going to say when Anwar made his trademark chameleon words in Australia.

Below is the report from smh.com.au:

Rare earths move for Anwar, but only if proved safe

Malaysia's Opposition Leader Anwar Ibrahim has pledged to back Australian miner Lynas operating a controversial rare earths processing plant, if a new public inquiry proves it to be safe.

Earlier he had demanded the plant's closure.

Dr Anwar confirmed that if he won power, he would fast-track the inquiry but until then he would move quickly to shut the plant near the coastal town of Kuantan, 194 kilometres north-east of Kuala Lumpur.

"I am not prepared to risk the safety of people in and around Kuantan," he said, adding he was not anti-development.

Analysts say that in elections due to be called within weeks Dr Anwar's three-party opposition alliance has a chance of toppling the Barisan Nasional coalition government that has ruled Malaysia since the country gained independence from Britain 55 years ago.

The government has backed the $US800 million ($A782 million) plant, built to process rare earths from Lynas' Mount Weld mine in Western Australia, saying it complies with Malaysian and international laws and standards.

But the plant has faced strong opposition from activists in a group called Save Malaysia Stop Lynas (SMSL), which has drawn nationwide support through internet and social media campaigns and street protests.

The clash is set to be a key issue in the most closely fought election in Malaysia's history.

Dr Anwar said in an interview he has "reason to believe" the concerns of many people about environmental consequences of the plant, built in a swampy area next to a tidal river, about three kilometres from the South China Sea.

He said he did not trust government agencies that approved the plant because of reported birth defects and leukaemia among residents near a rare earths refinery built by Japan's Mitsubishi in Malaysia's Perak state 1982, which has since closed.

But a spokesman for Sydney-based Lynas said the Perak plant used waste from tin mining as its raw material, which contained high levels of thorium, the source of high levels of radiation.

The Lynas process was different. "By all international standards, the Lynas raw material is classified as safe, non-toxic and non-hazardous," he said.

Dr Anwar said he would offer the company and others the opportunity to testify before any inquiry.

He would also seek to involve world experts on rare earths that are used to make high-tech products such as smartphones, iPods, flat-screen televisions, hybrid cars and missiles. "If Lynas can come out with a convincing argument there is no risk to people's safety and security I will be the first to champion the plant there," Dr Anwar said.

Asked about Dr Anwar's pledge to set up an inquiry, the Lynas spokesman said the plant had already been subjected to numerous independent reviews, including by the International Atomic Energy Agency, the world's pre-eminent authority on radiation safety.

"Lynas is dedicated to zero harm. Care and wellbeing of our people and the communities in which we operate is at our core," the spokesman said.

In Kuantan, a seaside town popular with holidaymakers, anti-Lynas activists claim about 80 per cent of residents oppose the plant but no polling has been done.

A four-metre-high fence surrounds the 100-hectare Lynas site at the edge of an 8600-hectare petro-chemical industrial park.

Construction of the plant was completed last year. Waste water from the plant runs into mangroves where Syed Salikin, 47, goes fishing for crabs almost every day.

"We don't know much about Lynas but I fear it will be dangerous for us," Mr Syed said, holding one of his day's catch. "I am afraid the river will be contaminated. I am not so worried about myself but I am worried this will affect my children and grandchildren."

Rumours swirl around the town about problems at the plant, fuelled in part by a report last month by Germany's Oeko-Institute, commissioned by the Save Malaysia Stop Lynas organisation. It said the plant's design has several deficiencies, including with storage facilities that could allow radioactive and toxic wastes to leak into the ground and ground water.

But Lynas said the institute did not contact the company during its preparation of the report and it was not given an opportunity to review it before its release.

The well-funded SMSL group has been embroiled in legal action aimed at blocking Lynas' temporary operating licence while Lynas is suing seven SMSL directors for defamation. An appeal to seek leave before the Malaysian Federal Court is pending, frustrating efforts by Lynas to see off a final legal challenge.

Bastian Vendargon, a barrister for SMSL, said the directors being sued were mostly retired teachers and public servants who faced losing their houses and savings if Lynas won the case.

"They are obviously very worried about their future," he said.

Andan Sura Rabu, a candidate for Kuantan in state elections for an Islamic party in Dr Anwar's alliance, said he was campaigning on the promise the plant would be shut and opened only "if the public can be convinced it is safe''.

god should have made him a chameleon. as a human he is a bastard.

btw, i think there is a higher risk of dying or getting maimed by mat rempits than this. and being run over by the bersih crowd..

anything to win votes. cheapskate of the century, confirmed.

escapism down under courtesy of rahim ghouse the bookkeeper

Hj Ismail Mina said...
This comment has been removed by a blog administrator.
5:45 PM

Your reminder is good but we are not encoraging aimless religous preaching in the commentary.

Sorry we have to remove your comment. However we welcome related discussion.


The chameleon is trying to avoid the question targeted at him on his involvement of Lahad Datu as stated by the Philippines media.

It seems the chameleon plan c has backfired him and the only way to cool things down is to ran away to Australia.

The last hot topic involving him aka sodomy II, he ran away to the Turkish Embassy.

It seems clear that this chameleon ain't got no ball at all.

Bro.
Ha ha ha you takut ya to face the reality.

You baru balek Haji.Just a remainder to you as a Muslim.Dont overshoot.

Thanks for your response.

Convince us that you are not quiet genuine with your advice and spewing of holy words.

Holys***, James Bond Anwar is even the Australian agent now!!!