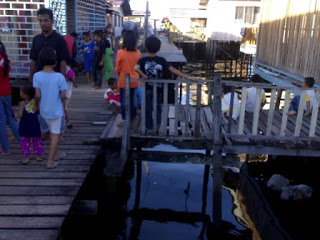 The report in latest The Star below:

LAHAD DATU: Two policemen were shot and injured during a shootout with gunmen at Kg Simunul island at 7pm on Saturday.

Sabah police chief Datuk Hamzah Taib said late Saturday that a team of policeman had gone to the island in search of several personalities' following reports that they were in possession of firearms.

“The policemen entered the village and were walking on the stilt boardwalk when they were fired upon and two of our men were injured,” Hamzah said as fear gripped people in Sempoorna and Tawau that a group of gunmen had attacked security forces.

“For now, we believe it is unrelated to the situation in Lahad Datu,” he said.

He denied that any police station had been attacked.

The situation is tense in the east coast of Sabah after Malaysian security forces clashed with Sulu gunmen near Lahad Datu on Friday, leaving two police commandos and 12 gunmen dead.

Will be updating more information.

Read about in GWA News, below:

Malaysian police escort dead comrades killed by mortar fire. Malaysian police escort the body of dead police commandos killed in a mortar attack during a standoff with Sulu gunmen in Tanduo village near Lahad Datu on Sabah Friday. Fourteen people including two police officers were killed on March 1 as Malaysian security forces ended a standoff with Filipino gunmen over a territorial dispute in Sabah. AFP PHOTO / BERNAMA NEWS AGENCY
Amid an ultimatum from Malaysian Prime Minister Datuk Seri Najib Tun Razak to surrender or face the consequences, Malaysian police on Saturday dropped leaflets from a helicopter telling Filipinos still holed up in Sabah to surrender.

Earlier, Najib said the time to consider the demands by the followers of Sulu Sultan Jamalul Kiram III had lapsed.

Najib said the armed intrusion into Malaysia and the killing of two security forces personnel and injuring of three more was a "serious crime."

He said he called up Philippine President Benigno Aquino III Friday night to "state the stand of the Malaysian government on the matter."

"I said the government felt that the time to consider the group's demands had lapsed, and that they had the option of surrendering or facing the action of the authorities and security forces," he said.

Aquino on Saturday issued a statement telling the Filipinos in Sabah to surrender without conditions.

Najib also disclosed the Filipinos used a white flag as a ruse to open fire on Malaysian police commandos Friday.

"The two slain commandos had seen the white flag and did not think that there would be other intruders waiting to open fire on them," he said.

Najib said he is not discounting the possibility the white flag was a "trap by the intruders," adding that if it was the case, it was "an act of cowards."

For his part, Hamza said the police were collaborating with the army to resolve the matter.

But he advised people not to speculate on the number of security forces' personnel killed or injured in the gun battle, adding no curfew had been imposed in the area.

"I have to make this clear because there have been announcements of a curfew in social websites and blogs. I am in charge of issuing the order for a curfew, but I have not issued any order following yesterday's incident," he said.

On Friday, "10 to 12" Filipinos were killed along with two Malaysian police personnel during the gun battle that followed a standoff that lasted almost three weeks.

Malaysia said its police had cordoned off the armed Filipino on Feb. 12, after they arrived there and laid claim to Sabah.

In Lahad Datu, Bernama reported many business premises remained closed Saturday, with only few shops and restaurants open for business.

Bernama said few people were in the town even though it was the weekend, and there were fewer vehicles than normal on the roads.

A separate report on Malaysia's The Star online quoted Sulu Sultanate spokesman Abraham Idjirani as saying the Filipinos in Sabah will maintain their position but want a peaceful resolution.

It quoted Idjirani as saying Sultan Kiram wanted to discuss the issue of their supposed territorial claim to Sabah.

"We will sit down and plan it out, he is still hopeful for peaceful negotiations," he said.

He added the sultan's brother Raja Muda Azzimudie Kiram, the leader of the group, is "alive and well."

But Idjirani said he had not been in contact with Azzimudie since Friday's battle. The Star online said it made "numerous calls" to Raja Muda but failed to get to him.

Idjirani also said he knew nothing about Najib's discussion with President Aquino. "We are not aware of this," he said. — LBG, GMA News

With this cowardice act, the Malaysian authorities are losing patience. There will be no more negotiations.

So does the Phillipines government who has been warning the 'rebels.' [Read in FMT here]

But, why did Manilla was reported to have formed a legal team to look into their claims on Sabah? Is this a smokescreen?.

Our side have been trying to avoid bloodshed. If one have never been to Lahad Datu, they should understand that there are a community of Sulus in Lahad Datu. They are considered as indigenous people of the areas and have been traditionally incoming and out going from Lahad Datu.

Do not be surprise that the Sulu armed intruders could possess Malaysian ICs.


Kwn2, allow me a moment of indulgence to clear the foul stench of stupidity amongst the malaysians.

Kes kat LD is nothing new to us sbhns, in the 90s they abruptly came to the shore at Semporna and immediately bombed the police stations, and went amuck at the town.

They are smart people, some left at the sea naik dr kwsn bakau and lived 4 6 mth b4 start to mingle with locals and married them.

The tausugs in LD now didn't came all at once, instead they came in batches, with inside helping frm their family at the village.

Trust me they have been there at least 2 3 mth b4 the group bcomes complete, then they decide its time to wage war.

Polis kene masuk dulu sbb dorg trained as negotiators, tentera is the last resort as they will not spare anyone once commanded.

They need time to ensure all the locals are out of the village and then cut their food and finance sources, hoping the tausugs will surrender.

That is our rules of engagement. We are not barbaric stoic like the american soldiers.

Equipments like radar detection is not practical since one can't differentiate from the radar, enemy boats or friendly boats. Read Akar Umbi here for the number of incidents

If further question is posed on the problem of our 'porous' sea in Sabah, then do ask PKR's former ATM, Lt General (R) Dato Abdul Ghaffir bin Abdul Hamid and PAS's former TLDM First Admiral, Tuan Haji Imran, who was second in command in the army for 2000-05 and Second Admiral in the Navy .

They were involved in the Ops Pasir with regard to secure our Sabah borders. Were they competent in their duties to cover-up the loopholes in our border? Or was it given to Nur Misuari and this faction claiming to be Sulu Sultan to exploit?

There are those that questioned as to why it has to be police and not military in charge. An extract from this high traffic Malay blog, Gerakan Anti PKR here, below:


The Malaysian security forces upped the tempo to a higher level by making public the time frames to solve the standoff. When the third time limit was ignored we lost face and sent blood curdling to act. Ok, the enemy raised the white flag. Our VAT69 commandos fell into the trap. But then to be safe and sure they should asked the enemy to come out in the open, unarmed and then only we show our faces! Isn't that standard procedure in warfare? Perhaps, it is easy for me to say for not being part of the life-risking danger.

why dont Anwar sue Reuters and Manila Times on their report re to the Lahad Datu incident.

He just kept quite on it.

Yep. That asshole and his coward commodores are the intigators. We know that for a fact!!!!