We understood his innuendo. It became a valuable lesson never forgotten even after more than 10 years since his demise. May Allah bless his soul.

With the on-going Lahad Datu intrustion and claims on Sabah, hope our leaders - government or corporate or politicians, Ministers, senior statesmen and Sultans - learn something important from the Sulu history and also our own history.

Do not decide anything before understanding thoroughly the decision to be made and it's implication - short, medium and long term.

And, don't chimply chine agreements before reading, understanding the agreement and it's implications.

The Phillipines or the Sulug can say and make all sort of claim on Sabah but upon reverting back to the  historical documents, it is all talk.

It is denigrating or even derhaka of us but we'll say it anyway.

The Phillipines and Sulug have to face the fact that the past Sulu Sultanate were too dumb and complacent for not reading the fine print, thus ceded Sabah away forever.

Not only them, but our past Raja-Raja Melayu, whose words cannot be disobeyed and even advising them could sometime be frown upon, chimply chine our country to the colonialist Europeans.

Perhaps, we managed to  preserve our sovereignty but it is no compliment.


Our future could be bleak because we keep chimply chining away lands and space to foreigners on short-term commercial reasoning as done by PKNS planned Datum Jelatek.

We are doing without thinking of the bigger social, political and economic picture. It is happening rapidly and rampantly in Johor's Iskandar Malaysia despite the watchful and scrutinising eyes of the Sultan..

And the bloody PKNS and Johor Corp CEOs, both with a corrupt past, think they are forward thinking and the rest of us are stuck in "gerai" mentality.

The two idiots, in which one of them is our own buddy and Alumnus, are not learning from the plight of the Palestinians and Rohingyas or even our past history.

What can one expect from mechanically-minded Engineer and Accountant, whose concern are for Ringgit and Sen, that they are devoid of any soul and senses? 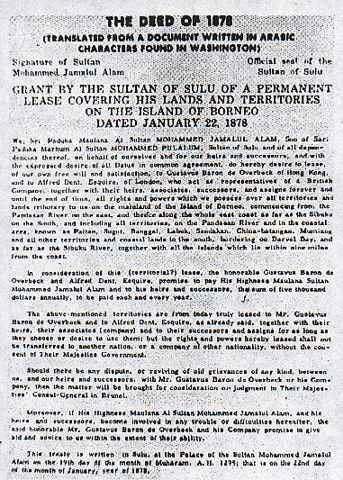 The dumb Sultan Muhamed Jamalul Alam chimply chine without understanding that grant for a permanent lease means giving away Sabah forever for pittance.

He could have made more by adminstering and developing Sabah. His ancestors later could benefit from the Sabah oil. But instead, his subjects now suffer from war and now living in abject poverty.

In the above permanent lease document found in Washington, the word permanent lease means it cannot be reclaim. The words in the grant also did not say lease Sabah but cede or gave away Sabah for a certain consideration.

History say that some of the areas in Sabah belong to the Brunei Sultanate and was given to Sulu Sultanate for helping out the Sultan win a civil war.

That is another one dumb Sultan to gave away part of his country and made his kingdom smaller in gratitude for winning over his relative seeking his throne. A similar senario will ensue in Malaysia when PKR and DAP take control of Malaysia.

After being ceded way to the British company, just like the case of the Straits Settlements, Sabah was placed under the British Crown Colony.

The British then gave independence to Sabah. Out of fear for their security to Indonesia and Phillipines, Sabah combined with Semenanjung, Sarawak and Singapore to form Malaysia.


Although one Filipino law professor argued that the money paid was not cede but lease [read here], it is easily disputed.

It means the Sulu Sultanate was more bodoh. He gave away Sabah but did not ask for the full payment upfront but on a cheap layplan till kiamat to end!

The Professor needs more argument than that. Read our past posting with the six points on the slim chance of Phillipines winning the claim at the ICJ.

Malaysia should not and never agree to settle the issue at the ICJ.

This brings us to the many numbnuts at the top of our GLCs and SLCs.

The North Borneo Company is like the foreign companies we chimply invite to buy into our properties and contractors, architect, planner etc from abroad to do local work when our's are equally or not better.

To a colonial country like Britian, it can be called investment but for us, it is ceding our sovereignty. Who dare colonialise Britain?

Unless we are American, we can't easily throw them out and reclaim back our land and properties which is indirectly our sovereignty.

But we are not.

The Othman Omars, and Zaki Zahids, Azman Mokhtars, Ganens, Vincents and the rest of the Tingkat 4, including Dato Gani Osman are too blinkered and maybe corrupt by Ringgit and Sen to see, understand and differentiate that.

There many more corporate numbnuts being groomed like IDEAS publicity crazy but know nuts Wan Muhammad Firdaus. JP Morgan took this boy thinking he is highly connected and will last forever.

Hopefully his highness the Sultan of Johor will see better and understand why Johoreans do not like Iskandar Malaysia project.and registered their reservation in the last general election in 2008.

The Sultan Johor is more sensitive and concern for Johor.

We need to be more vigilant in our business and development plan. No money for money sake but the social, economic and political interest of Johoreans. Consideration have to be strategic in nature.

For a start, do not allow Dato Khaled Nordin to be Menteri Besar of Johor. We are aware that Dato Shahril Samad is proposing his protege's name to PM. Our preference is for Dato Hishamauddin Hussein Onn.

All future PM should taste being an MB, isn't it?

One idiot, believed to be Khairy's Stephen Doss, is bitching and simplistically stereotyping us as someone sore for not getting project.

We suggest Khairy should drop this Indian with an orang putih name. He talks like he is smart and thinks he is smart but he is childish, dumb and predictable. No one reads his blog anyway.

For the record, we never care so much for project. We are not contractors or businessmen. If there is opportunity, fine but we are happy with our simple common man life and living in marhean neighbourhood.

Syukur Alhamdulillah we can already afford to retire when the time comes. 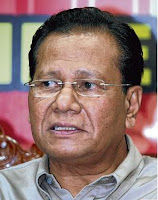 We've been bitching on Gani not because of being sore at not getting projects but because he used our intellectual property without paying for it.

Much worse, Gani chimply copy without consulting the owner of the idea and gave it to others to execute. It was the executor that approached us to seek advise upon realising there was a missing link intentionally left out.

Because of that, he placed Johor in a difficult financial difficulty.

Gani deserve to face the problems he get at the twilight of his political career. He will pay for his past ego, jealousy and ill intention towards others by being remembered for his tattered legacy like the Sulu Sultanate.

Wait when he retires from his MB post, every crap he did towards Johor will be spilled out that no young cat, who only appeared in the Johor scene later, can answer.

Maybe as the next candidate of menteri Pelancongan suit his mentality.

I think Dr Latif will be the next Johor MB rather than Khaled or Hisham and hopefully not Nurjazlan.

i oppose to the idea of hisham for Johor MB...
reason: his constituency doesn't want him, why must Johorean want him. A person who show his face only when he need and not when the people need him to represent the people.. no no no... the reason he win, the johorean believe in the party and not him personally.

It's unfortunate that as a senior pro-BN blogger, you decided to attack an Umno leader who is leading the fight in the frontline State of Johor so close to the general election. Equating Ghani to the Sulu sultans was simply uncalled for, especially now that we are having the Sulu gunmen crisis at hand. I'm disappointed in you and hope you will indeed get your wish of having Hishammudin Hussein as the new Johor MB. I would love to see Hisham handling the Sultan's wishes, Johor Umno and the Singaporeans across the Causeway.

Perhaps you care to tell me which rules, regulations or article in the constitution that prohibit me of taking a bite a gani othman.

Before you call anyone uncalled for, get your priorities right. Mine is agama, bangsa dan tanahair. What is your's?

Dont expect me to keep whacking the opposition, but allow UMNO leaders to act like another Sulu Sultan.

The public could criticise Khalid Ibrahim for messing up the selangor financial affair by his stupid free water program.

Is gani so holy that he is maksum from the sin of KPRJ?

and yet we keep them to this day....free rent, free everything off the sweat on our backs. Their offsprings action lebeh, hidup senang...... what is it that they do for the Negara and Bangsa really??? On what merit???? If you were to judge by their predecessors - they will sell the country to the highest bidder and throw in their Mother too. So who is the bigger CHIMP???

WHAT??? You suggest that menteri amaran to be the next MB?? Are u nuts??? You have got to be kidding me...seriously bro..

The ex MB has been shown what his past deed got him. Losing to a dinosaur PAP.

I am with you all out on Agama, Bangsa and Tanahair.

So far my readings upon your blog been about 4 articles. Your expression in trying to straightened things up seem justified.

But, it looked more like an outburst. You may be frustrated in not getting your message across.

Then again I am a simple concerned melayu luar negara.