Our Whass App groups was buzzing all morning on talks that two Ministers will tender their resignation and the announcement be made on Monday.

Two names were widely bandied around. One is the Minister for Domestic Trade and Consumer Affair, Dato Hasan Malek.

He came under fire from bloggers and social media from both side of the political divide ever since he made the naive comment to ask consumers to switch to other food when chicken prices spiked up. 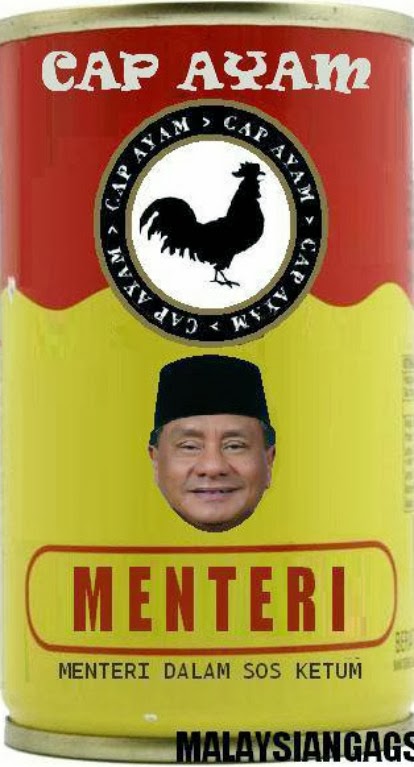 He became known as Menteri Chap Ayam and a photoshop version of a Chap Ayam sardine had his face replacing the sardine picture.

Ever since he has been under close scrutiny.

That comment profilerated into many versions of the same joke. 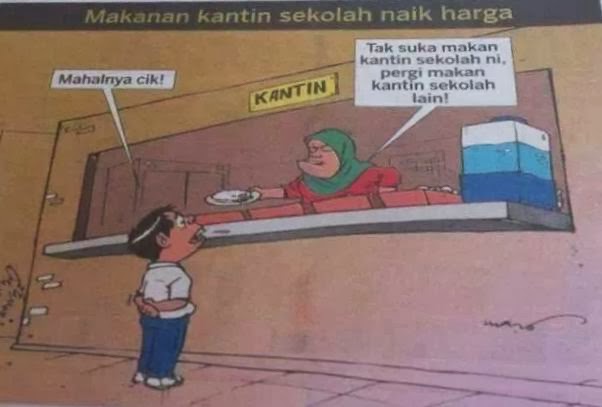 One cartoon in a mainstream newspaper recently shows a schoolboy complaining of expensive canteen food. The canteen operator suggested he go to another school canteen.

The frank, straightforward and rhyming nature of the Negeri Sembilan dilect adds a touch of comedy to their spoken words. To an outsider, the Negri Sembilan-ders are never serious. 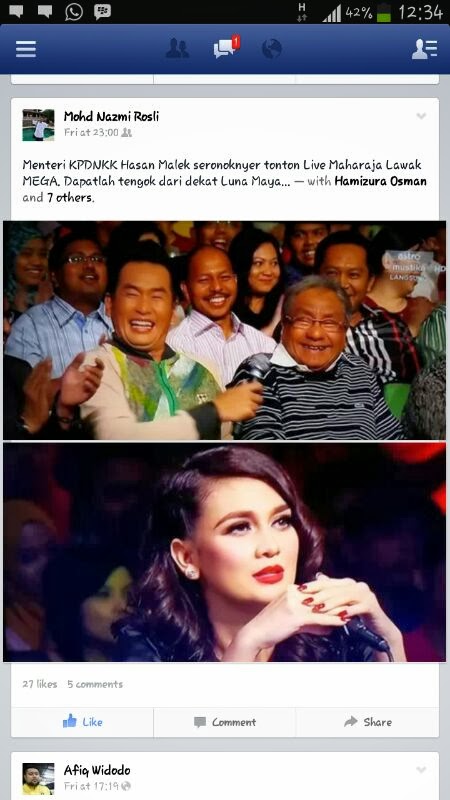 In the midst of his rising comedic posterity, Hasan Malek was invited to appear in a TV show.

He should have been advised by his press secretary not to accept it. Not knowing any better or the natural affinity for politicians to want public attention, Hasan Malek appeared on Maharaja Lawak Mega program.

Maybe by the time he realised he was on a comedy show, it was too late. It only enhance his comedic image and made fun further.

Then came the rise in sugar, fuel hike, rumoured toll hike, and the TURUN new year protest. Hasan Malek was reported to comment that they is no complain to the price rise because his Ministry received no complains. 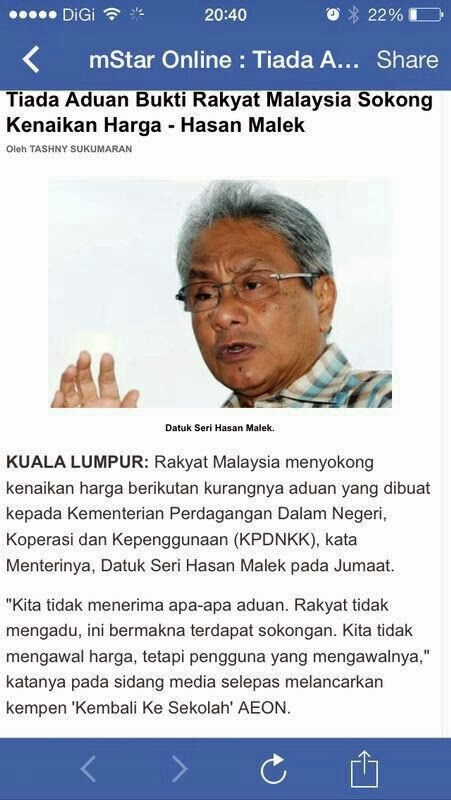 Not quite a clever remark.

He does not realise that his Ministry is seen as ineffective in controlling the indiscriminate price hike by scrupulous retailers and wholesalers that filing a complaint is commonly viewed futile.

His press and media people are not working or he is deaf. 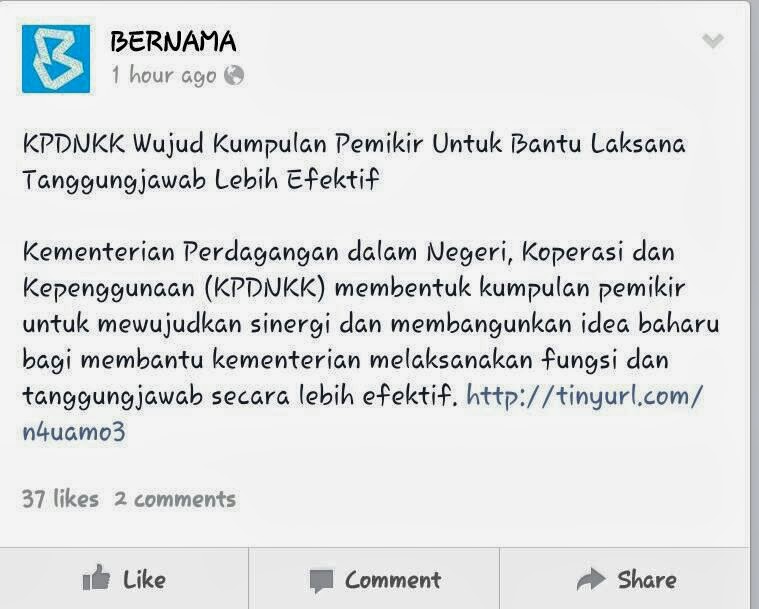 Few days ago, Hasan Malek said his Ministry will established a PEMIKIR group to synergise and develop new ideas to help the Ministry function effectively.

In the midst of public's growing critical of PEMANDU and their exorbitant lab and consultancy bills, he is looking for trouble. That statement is an insult because it infers the civil servants in the Ministry are not thinking and unable to synergise thus need outside help.

It is repeatedly displaying Hasan Malek as a verbally incompetent Minister. How could a politician be so?

As we understand it, it is likely the Negeri Sembilan rural psyche that when communicated looks too much a simpleton by the masses.

Menteri Besar Dato Md Hasan was a former banker and former Managing Director of listed Cycle and Carriage Bintang. When TV provide coverage for him speaking Malay in his Negeri accent, he does not sound credible and serious.

Notice also the lack of depth and sophistication in Negeri Sembilan bloggers writings.

The problem so far, Malek Hasan's Ministry looks not to be monitoring the blog and social media comments on the Minister and gauging public perception of himself. There have been no correction or explanation coming from him or his officers for his comedic comments.

This morning, the following was circulating: 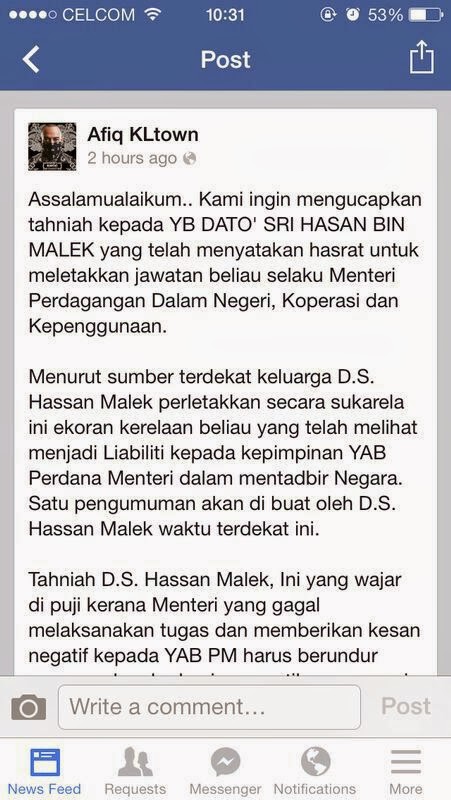 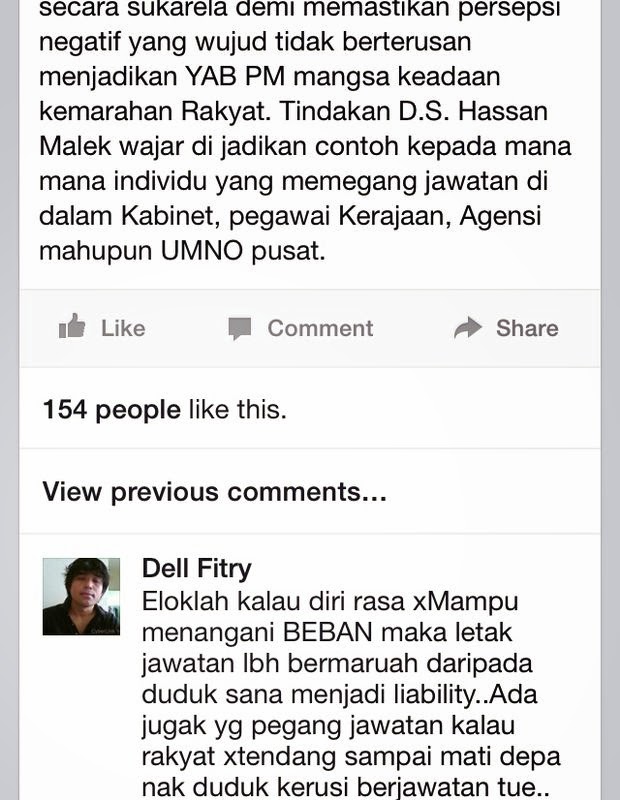 Our Whass App groups wished it was him.

Then came a denial reported in BNBBC website here.

When it comes to his position as Minister, Najib's man, Hasan Malek is pretty damn fast to reply or deny. If his willing to kiss the Prime Minister's hand like a serf to his lord manor, he must be quite sure he is safe.

There is another rumour going around that PM will do a cabinet reshuffle. Hopefully not.

At the rate Najib kept failing in his appointments, he better not. The bad thing is he could not dismiss any of the incompetent and LGBT ones. He piles up rubbish around him. 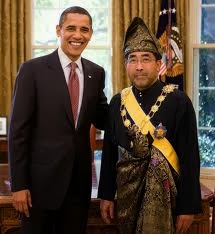 Heard Dato Dr Jamaluddin Jarjis is lobbying to be Minister in charge of TERAJU.

Oh boy ...Putting this anak orang Kamping Dulang, Pekan turned feudel Obama Lord of Rompin as Minister for TERAJU, it is no help.

As a Minister for TERAJU, he will turn the Malay and Bumiputera into his Rompin serf of Orang Asli and UMNO supporters. He expect the Malays to wait for him outside his hotel room while he sleeps.

TERAJU will be another JHEOA.

JJ is too arrogant to listen and understand the Malay and Bumiputera grouses and too consume to have things his way. He should not be given Minister status and an office in PM Department. Too much a self serving business opportunist to be involved in public service.

Quite sure he will get someone to call. One can sense it when one get incessantly repeated calls from same unknown numbers. 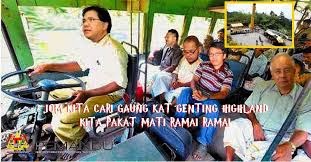 For JJ to Minister for TERAJU, it means he will be subservient to the Minister for PEMANDU. Interestingly, the other name being bandied around to resign is PEMANDU CEO and failed turnaround manager of MAS, Dato Idris Jala.

His PEMANDU outfit is getting a lot of brickbats from the public.

PEMANDU officers seconded to GLC are involved in corruption and ridiculous schemes. They lack any sense of decorum in dealing with Government and are too proud and brash.

Lab idea is not received well to Government servants. It is not just about turf war but Government data are brazenly laid out to bare and confidential materials are demanded to be revealed to unqualified public.

PEMANDU staff are exorbitantly paid and given too high ranks in the Government structure. Their works are shabby and reckless.

The whole idea of conceiving something within a short time frame of their lab and so-called having all stakeholders involved at one go is ludicrous.

So far Idris Jala has not denied he is resigning.

For quite a while, we have heard of his plans to privatise PEMANDU and become an external  consulting group to Government. This is dangerous considering the data and materials in their possession.

Close PEMANDU but no officer should be allowed to take anything out. Every material taken must be recorded and any material used after their PEMANDU days will open them to legal prosecution.

Information just received said PEMANDU have pre-prepared for that eventuality. "They" have rented office space at Mid Valley.

1. The truth is it's the PM that should resign. For the past 4 years he has proven that he is incompetent,clueless ,spendtrhrift, syok sendiri and can be led by the nose by the CONsultants.

2 . Voice, you are one of the top sopo blogger. Your opinions carry weight. Why are you beating around the bush ? Just say it ! It' the PM that must and should GO ! Remember 'the buck stop here' ?!

Hie has beat the bushes too often that there is no more bushes n land is already clear. No need to say any further.

If najib is still recalcitrant to still keep the incompetent n self serving buffoons around him, he will end his three term plan any day.

He will be responsible for ending his father's legacy.