After Putrajaya, now Japanese fault, but will never be Anwar's

After Dato Anifah Aman's explanation, the Japanese Embassy issued a statement. An extract from AFP as found on China Post here reads as follows:


... embassy official Tomoko Nagai said that while Japan last year lifted a requirement that Malaysians obtain visas to enter the country, Anwar is still required to have one due to his past criminal record.

She said Anwar did not apply for a visa, as he had for previous visits.

“Japan could not consider a special arrangement for Anwar since we did not receive any prior application for a visa,” she said.

More on it in The Malay Mail Online here.

Anwar made a statement. With the benefit of hindsight (term used merely coincidental), he spin it to blame the Japanese. Never his fault.

Japan did not inform me of ‘special permission’, says Anwar

KUALA LUMPUR, Jan 21 — Datuk Seri Anwar Ibrahim said today he was not informed of the need for “special permission” to visit Japan, after its embassy said this was why the opposition leaders was prevented from entering the country last week.

Anwar added that his staff was also not informed of this requirement when they contacted the embassy here to find out whether he needed to apply for a travel visa, just as they did for his previous visits to Japan.

“Our office inquired about what was needed in order for me to travel to Japan. I was only told I need not apply for a visa, nothing else,” Anwar told The Malay Mail Online in a telephone interview today.

“Previously I only applied for visas, and I had no problems at all. I was there last year,” he added, saying he was “shocked” when he was denied entry to the country upon landing at Narita international airport.

Since the new ruling is already in place in June last year, it is unbelievable for the Japanese Embassy to not know or was still confused with the new ruling for ex-convict like Anwar.

The excuse from Anwar must have came late after all information are already in thus it enabled him to craft a good excuse and spin.


Otherwise, AMK Youth Leader, Shamsul Iskandar would have mentioned it in his memorandum submitted to the Japanese Embassy earlier yesterday during the rally to boycott Japanese good.

His memorandum merely mentioned of the human rights to travel between state as stated in article 13 of the Universal Declaration of Human Rights. Same line as Karpal Singh and Latheefa Koya.

It is hilarious to see Sam calling for the boycott of Japanese product.

In our previous posting here, we mentioned of Latheefa Koya and Karpal Singh making a fool of themselves for the incident being kid around as Anwar mistakenly filling in "meliwat" instead of "melawat" in the entry form for purpose of entry.

Lim Kit Siang also made a fool of himself to call on Japan to make an apology for the snub on Anwar. However he put the responsibility of Putrajaya to make such demand. [Read Malay Mail Online here.]

Still a cheap spin to past the buck to Putrajaya. Only the gullible and young buy-in to such shallow propaganda trick which could be made use further to blame on Putrajaya.

Still the biggest idiot must be DAP's Nga Kor Meng:

The fact to the matter, Anwar owes an apology to the Japanese as mentioned by Dato Hamzah Zainuddin and Dato Zulkifli Nordin. [Read Utusan Malaysia here]

That Anwar will never do especially after he has spin it to blame the Japanese.

He does not have power in his hands and yet he can never be truthful, honest and righteous. Imagine when he is PM, will he bother to listen? Will he be someone responsible who owns up to his words and commitment?

Commitment is another difficult area for Anwar to walk the talk.

For those that was around and still remember his days as Minister, they know he can talk but when it comes to working, he is still a bigger kangkung who plants he roots by any longkang and nside any kangkang .

At least, Dato Najib still listen. He only forgets and need to be reminded and threatened, at times loudly. 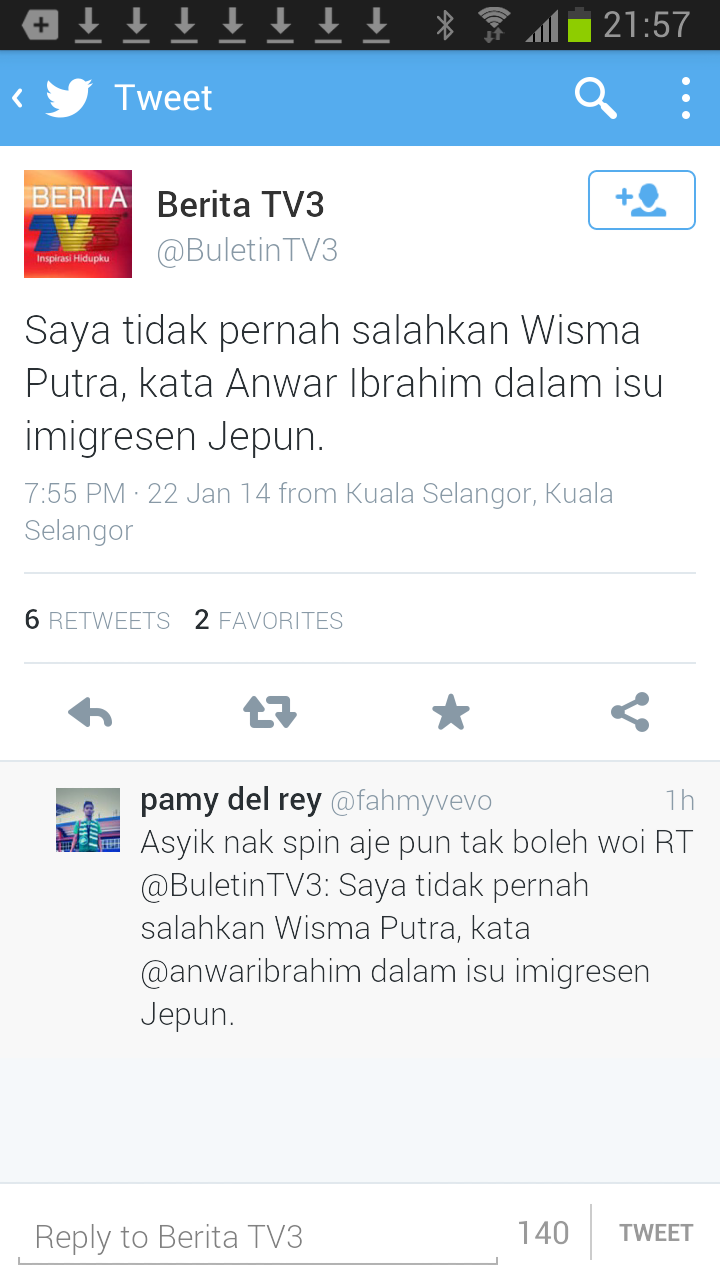 In the latest development, Anwar confirmed he is neither blaming Putrajaya nor Wisma Putra. So who is he blaming? Surely not himself.

Hear his PC below:

To unspin Anwar, he is not a political detainee but convicted for abuse of power and sodomy.

If he did not accused Putrajaya or Wisma Putera, who does he meant as "hidden hands"? His only mortal enemy is the government, the Barisan Nasional government. Neither the Japanese nor the western power.

Anwar was reported by The Malay Mail to have asked his staff to clarify on the visa requirement. It is him admitting that he knows about the procedure before. So why raise about human rights and claim of being accepted as a political detainee in other countries?


The embassy have returned back to his office to know when did his staff and whom did they contacted as to enquire about the new rule. Anwar's replied to say he is not pursuing the matter any further. Does he?

Knowing the Japanese as being efficient and able to determine whether his office staff actually did enquired with embassy, Anwar is avoiding the embarassment of being caught lying.

Off tangent sikit ye. But can you ask your friend kat Maybank tu, that Datuk Farid Alias why is he backing up a midget Cina DAP to head IB?

After this you shall also see IB tu jadi sarang Cina DAP. Not like it is not now. Nak I bagi contoh sikit?

I told you so, anwar actually being kangkonged by his own staff......just as najib.
tak mau check betul betul, just baca internet or hearsay from their friend

this species are more interested in their after office activity than to focus their job.

Let us be honest that the worst of Anwar is still much better than the whole bunch of incompetent and useless UMNO leaders including Ajib, kerismuddin, Moohidin, MafiaZahid, Hassan, etc

You must be thinking from the heart of your bottom or tengah mabuk todi.

PR team members are made of a bunch of clowns and idiots. Please do not dream that you will rule this country. If BN is corrupted, PR is worst.