If it was Ronald Reagan that got 'kangkung'ed... 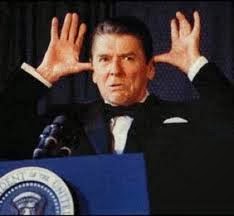 Pardon us for reminiscing of our days studying in the US.

Back then, we had a bad habit of watching The Tonight Show with the late Johnny Carson. 11 PM Eastern time is break time. Study continues or sleep after the show.

The host, Johnny Carson (and sometimes David Letterman as substitute host) was noted for his jokes on current event. He would make fun of the President and politicians based on recent comments and incidents. And he takes potshot at both sides of the political divide and more.

Such jokes made of politicians and government are so often that politicians from both ruling and opposition party took it in good humour. Even then President, the late Ronald Reagan was never affected by such parody.

The kangkung parody done by the pro-opposition supporters should not have been made too serious by PKR's Penang state assemblymen, Prime Minister and his supporters. Take it in good spirit.

Admittedly the pro-opposition supporters have got him on this one just like the cow scandal of NFC on Dato Shahrizat Jalil. Dato Najib must admit that they have got their message through to the people.

Najib should have been a sport to not be angry or Ayahanda Perdana Menteri akan dijual. Take it in stride and with good humour. 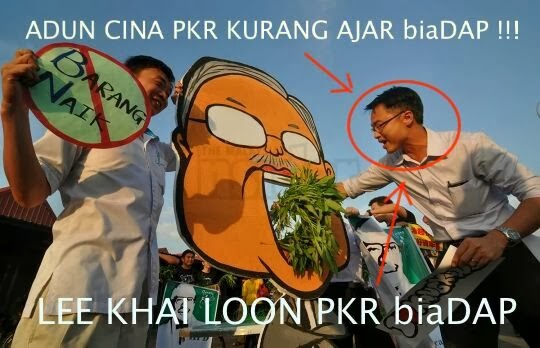 If it is a parody on the PM, PKR's state assemblyman for Penang should have kept it strictly as a parody. Not turn it into an insult and ridicule of the PM. Keep it respectable.

They shouldn't be disrespectful of Royal Prof Ungku Aziz by creating a fake twitter account and attribute a critical poem to him. Quite sure Dato Samad Said knows that is irresponsible.

So the rally in Penang today and press statements by various UMNO groups and leaders have it's basis.

As for Najib, hope he admit that he had 'kangkung'-ed himself by being smitten with the dogmatic and unrealistic thinking of Dato Omar kangk-Ong.

He further confirmed the perception that he is not sufficiently hands on with his flip-flop  decisions or not sufficiently firm for being easily threatened by demands from minority groups. The public thinks he is clueless when he spoke of forming a lab to look into people's cost of living after having it as part of his manifesto. 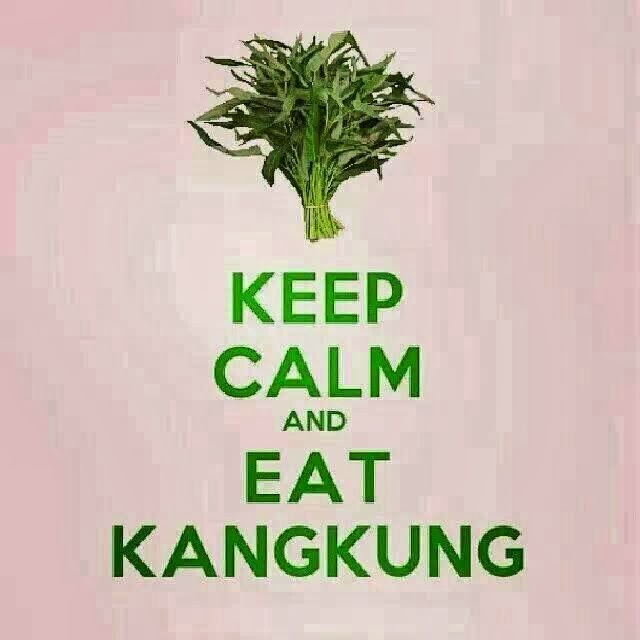 By being angry and hopefully not taken with the kaki bodeks doing the predictable rally of support in Penang, it is not improving confidence in him. Such old school actions only erode the respect and confidence of his leadership into 'kangkung di tepi paya.'

Such non-thinking action and display of anger will be seen as silly.

All he need to do is to get properly respectable and experienced advisers. Stop making more fundamental mistakes to avoid fulfilling the doom prophesies of him.

If Najib is smart and bold, he can use wit and humour to get himself out of it. However, he need to be more genuine in his effort to understand the common rakyat. All he need to be is to be himself and look sincere. He does not need to say he also eats kangkong.

Pak Lah's fall begins the moment he announced that dreadful 78 sen hike in petrol prices. With the significant rise in practically everything at one go, he should anticipate the rakyat's reaction and sentiment when their pocket is compromised.

That is why Ronald Reagan's successor, George Bush said, "The lifestyle of the American people is not negotiable."

If Ronald Reagan is in Najib's shoe, he would just smile and laugh. His reaction would be to say, "That's a good one. Should get a job with Mel Blanc to write scripts."

Then say something humourous like, "I got your message clear. Appreciate that it was only kangkung and not kangkang. Then my political career would be compromised."

Allow the audience to laugh for a while than say "As Prime Minister ..." but pause to allow them to silent.

Then repeat it again.

"As Prime Minister, I have to consider not just the affair of the nation but should have thought about the impact on the people."

No no ... not good. PM should not be too quick to apologise. It shows weakness.

"As Prime Minister, I have to look into all aspects. If we were to spend too much on subsidy, we can run out of money in the long term. Then, all of us will become 'kangung di tepi paya.

"We have look into all aspect in the impact of huge subsidy bill.

"PKR's Agenda Malaysia Manifesto did touch on this before they changed it to Buku Jingga."

That throws the book back at them.

"We believe it is within tolerance if we spend wisely.

"We hear the rakyat message and will turun padang to see and hear you all out. We would like to hear your complains and suggestions. We also take cognizance of the view that there are wasteful establishments like PEMANDU, Talentcorp, Teraju, Khazanah, 1MDB, etc.... that should be closed."

We doubt he will admit that he made mistakes with those outfits but he should end at "wasteful establishments" and full stop.

"We seek the people's support, feedback and suggestions on how to address this matter together. On top of that we will refine the high income economy model within the perspective of inclusiveness and sustainability of the New Economic Model that had not be spoken much lately.

"If the Malaysian people have to cutback, all other parties, be they leaders, or government, or GLCs and so forth must be more prudent. They must stop being oppulent and wasteful. Be more effective in their spending. Thank you." 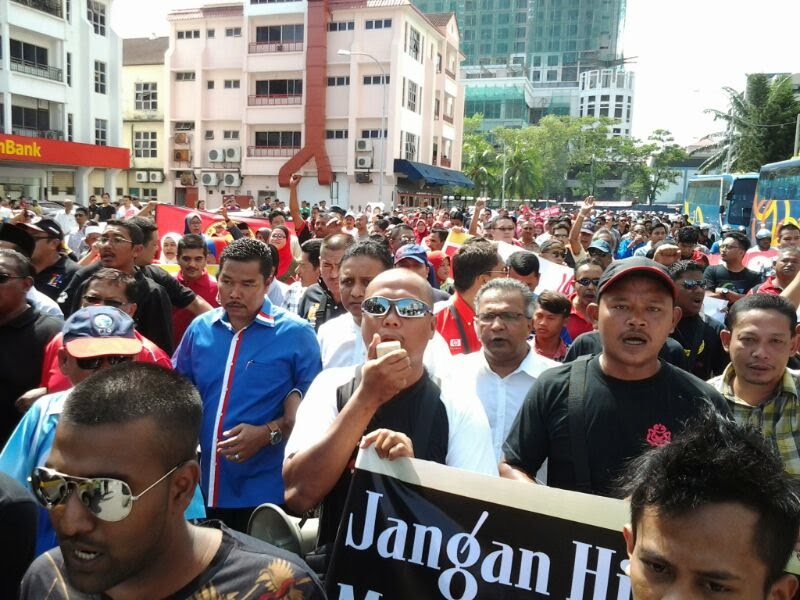 Najib should take in good humour and not get angry or try to be serious in explaining his position. It only take a bit of wit. So don't be stiff.

He does not need thousands to rally to show support. The rakyat would not care and they know it is staged. It only perpetuate the 'kangkung' message.

UMNO members should emphatise with the hardship that rakyat had to undergo than try to win the heart and favour of the PM with such rally.

We know some UMNO do emphatise.

Some UMNO members have been disappointed with PM for his electoral candidate lists, cabinet membership and cai selection for UMNO office bearers. Many UMNO veterans questioned the harphazard ways the country is being governed.

They see every other things are not going right and things are looking chaotic.

At this juncture, UMNO leaders should be selfless and be rakyat didahulukan. Being angry will not help but only worsen things.
at 1/18/2014 05:57:00 PM

exactly. why have to be so sensitive about it? Who are his political advisers anyway?

Agree that what the PKR MP did was distasteful. But don't agree that Penang UMNO should turn it into a racial matter (blaming the Chinese alone). Let's be frank if one were to look through the social media the kangkung jokes are being spread by people of all races.

He is not himself.We really have leadership crisis.

Low minded people everywhere... Come on kangkung not even an issue. It just a jokes then became mass parody among youngster whos clueless about what Najib actually does mean. Some people trying so hard to relate kangkung with petrol price hike...but please lah beb it just a short brief from PM for rakyat understanding basic market about supply and demand. Alamak... i watch it on tv lah. We can talk about petrol under consumer forum but for kangkung doesnt an issue. It just a joke... Mat sabu style.

Low minded people everywhere... Come on kangkung not even an issue. It just a jokes then became mass parody among youngster whos clueless about what Najib actually does mean. Some people trying so hard to relate kangkung with petrol price hike...but please lah beb it just a short brief from PM for rakyat understanding basic market about supply and demand. Alamak... i watch it on tv lah. We can talk about petrol under consumer forum but for kangkung doesnt an issue. It just a joke... Mat sabu style.