Sainthood for provocation to Regina 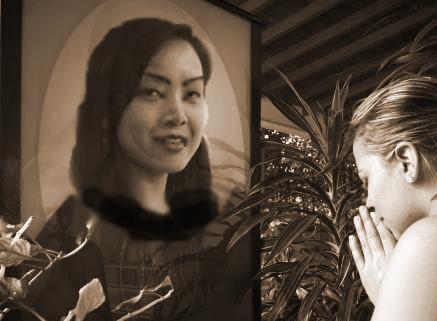 The story by alternative news portal and also picked by foreign news portal is churches defying ban order to use Allah in churches in Semenanjung. [Read MI here and MM here]

Regina Lee's tip-off written in our previous posting had sparked churches to criticised the 10 points agreements which they themselves used to ague against the seizing of bibles by JAIS. They are turning the table back from Selangor to Putrajaya. [Read MI here, MM here and here, and MD here]

Her church should seek for her instant elevation to sainthood. Her insidious manouvre had encouraged "mischief makers" to put out provocative banners with messages "Allah is great" and "Jesus is the son of Allah" outside churches in Penang. 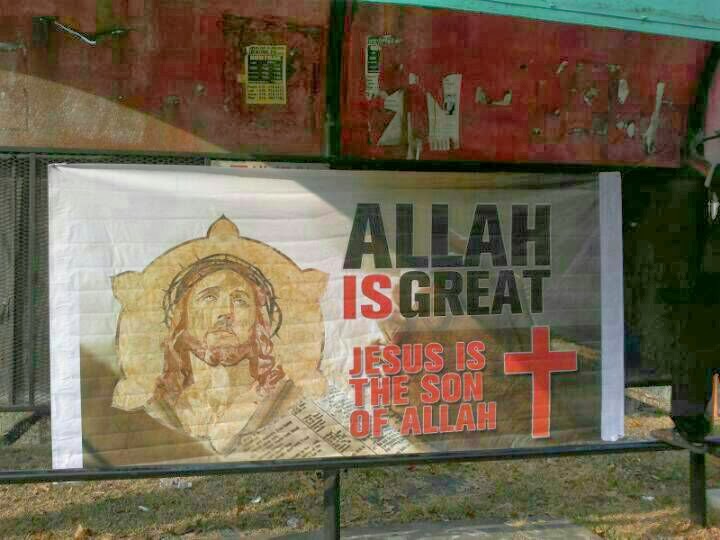 As of writing, no news is found of the incident except for Anil Netto's blog here. The staunch supporter of Dato Seri Anwar Ibrahim dispelled it as the work of "mischief makers". He reported the one outside the Church of Nativity in Butterworth was removed by the church.

However, the churches well coordinated defiance and statements does not give much credibility to the attempted denial by Anwar's dedicated spin master. Supposed it is the work of "mischief makers", who could it be?

Before speculating who intend to invoke such provocative act on the Peninsular Muslims, Apanama's posting here of Zakir Naik's view on the Allah name issue in Malaysia should be understood. An extract below:


Every main religion mentions God as Allah somewhere in their holy scriptures and books. It's not exclusive to the Quran.

To a certain small group, from among the hundreds of sects of Christianity, that demands the term 'Allah' in their Malay holy book, he sets a condition.

He says Isa the prophet (Jesus Christ) cannot be God because he cried out to Allah when put on the cross.

The new argument promoted by the church and pro-church side is that Islamic law and Sultan's edict cannot be applied on non Muslims thus no interference on the way of worship of the non Muslims. Still in question is whether the worship or ritual of the non Muslims are actually their practise.

In this case, their worship or ritual may have encroach into the constitutional rights of Muslims. The Muslims rights are specified in the constitution and legislated into civil and syariah law.

Blogger Azeeza Abdullah wrote in her blog here the view of a former Catholic from Sarawak but have embraced Islam.

He viewed current happenings as merely a ploy by DAP to use religion for their politics. DAP is uninterested in the religion of the Prime Minister as long as it is not a Muslim. Their agenda is only to apply socialism ala Singapore chauvanism.

This even debunk the justification for use of Allah in Bible for East Malaysians based on the use of deviated translation of God in Indonesian Bible used before formation of Malaysia in Sabah and Sarawak. 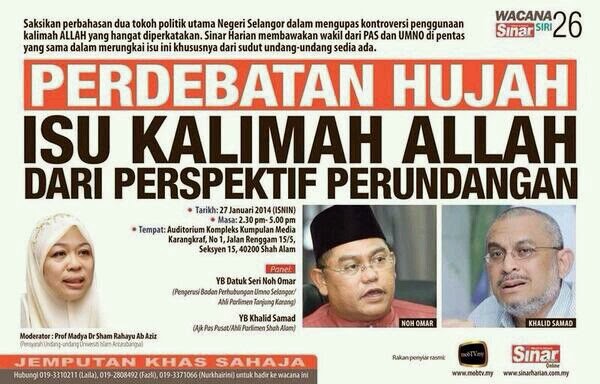 Thus, the issue is really legal in nature. Even the 10 points agreement cannot supersede the constitution and legislated law.

UMNO and PAS was to have a debate on this subject but it is expected to be merely a political debate. Both the Muslim based party quarrel while DAP benefit from their political instigation to divide society for their quest for power.

PAS thinks that having DAP will benefit their quest for power and their Islamic state agenda. They are too obtuse to see that they are merely being taken for a ride. When in power, their agenda and interest will be set aside as happened in DAP dominated Penang.

Voices started by blogger RBF [read here] had called upon Sinar Harian to stop the debate. It is disrespectful on the King and does not benefit any side. 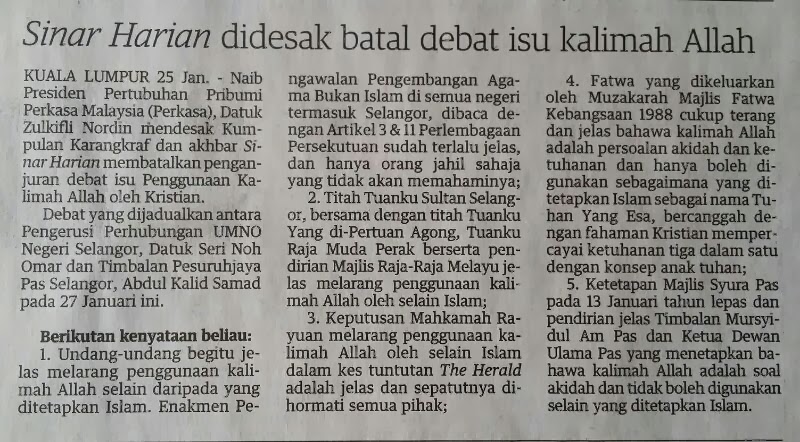 The common view now is the debate is politically motivated and merely to ridicule their political opponent. At the end, both side loses and will not look any smarter.

Does PAS wish to be seen by the Muslim voters as defending the blasphemous statement that "Jesus is son of Allah"?

In Malaysiakini here, a commentator David Dass raised an important point. Extract below:

So what is the issue? These services are conducted in Christian churches not in mosques. The government should take a firm line. Rulers rule in accordance with the law and the constitution.

How do one resolve the presence of Indonesian Bible readers East Malaysians Christians in Semenanjung in large numbers? There is more to that issue.

The important raised is the government have to take a firm and clear stance in accordance to the law and not try to please everybody. Najib's past populist approach has now come to haunt him. Will he dare wield the stick and bring out the long arm of the law to maintain order?

If the church is frustrated, Muslim group like Perkasa too is disappointed with the inability of the UMNO-led government to be firm and perceived to be weak. [Read MI here] In his blog here, Perkasa's Wira Chief blamed it on weak leadership.

In the meanwhile, Khairy should be congratulated by his "minder" for having Regina to split the different religion and the Malays on this issue. He helped made it increasing difficult for government and leadership to seek resolution and handle the constant provocation to defy the law and sensibility.
at 1/26/2014 08:40:00 PM

I tend to believe Anil Netto. The Christians are good at praying and making statements but they are careful not to 'provoke' the Muslims with such blatant banners. Furthermore the banners (all the same type) have been put up at churches of different denominations in the night; so it's obviously by someone who can't distinguish the Catholics from the Lutherans. Also, all the trouble seems to be in the 2 states under the PR - Selangor (Jais raid) and now Penang (church banners). There is a kind of conspiracy going around to cause racial trouble in these states. The banners were put up overnight and I have asked some of the church goers, who were surprised and shocked that such things happened. The churches removed the banners (which they wouldn't have done if they had put them up in the first place). I hope they have made police reports.

Sorry bro, but more than half this posting was pure flatulence.

You clearly don't have any grip on the finer points of the laws involved.

"There is the decree by the Yang Dipertuan Agong, religious edict by the National Fatwa Council and position of the Syura Council of Fatwa."

There is nothing more painful than watching laymen mangle something they don't understand, even if they are getting paid to mangle it.

Are the Christians sooooo desperate nowadays??????

While Amazon.com is thinking about using drones to send packages & Google going about with their Glass, we are fighting about a 5 letter word.

No wonder the Turks were greatful to Mustapha Kamal & Ismet Inonu for separating mosque & state.

All of this and all other issues are due to one, and one only. Its down to mr. Razack.

Has excess baggage (his fat wife and his cabinet choosings), too stupid to be true (his level of intellect and wisdom), and many others. The oppo view him as even dumber than dollah B.

The shit hit the fan when he decided to be a popular pm and announced silly measures like abolishing isa, ridding of subsidies and constantly talking up how he and his team are doing good and everyone should be thankful to him.

Now,everything is in line and is in tandem. There is no way he can get out of this allah issue. Image is everything and to the eyes of many, mr. Razack is a wimp. Typical rich kid attitude but balls the size of shrunken dates. When push comes to shove, he hides behind the wall that may eclipse the sun, his fat wife.

About six months ago, talks cropped up amongst a few in the line of, if there was no anwar, opposition is the better choice. Wonder how many times over the numbers have risen now.

I think you fail to understand the constitution.

Only islam is mention and it has a special position as religion of the federation n not official religion as usually mentioned by dap leaders.

The christians have intention of applying contextualisation on muslims to evangelise them. Thus for use of allah in bibles.

Such practise is not a peaceful act but a provocative act on muslims as clearly expressed by church n christian organisation.

The issue is not about practises of religion but malaysian legal issues on religion.

DSN dah xde credibility. He should resign and pls ABITW, no more blaming other people ok.

Bro.
If you accept the decision on Allah by our Court of Appeal,then the 10 points memo issue by PutraJaya cannot be implemented.

You have to be firm.Idris Jala,Kurup,Ongkili are the main batu api.

Anyone who believes in anil netto must be blind or plain stupid. He spins andlessly.

"The christians have intention of applying contextualisation on muslims to evangelise them. Thus for use of allah in bibles."

Which christians? Where? When? How?

This kind of lazy propagandist statement is the root of the problem.

It has been detected of Syrian Orthodox church which prays and like Muslims and have Arabic caligrahic paraphenelia doing deceptve evangelical work in Malaysia.

We know it happens.

Do not try to deny by asking for proofs that churches are aggressively proselytising Malays.

Can we have a link to your claim that the Syrian Orthodox Church is doing preaching work in Malaysia?