By May 13, let it be for soul purification 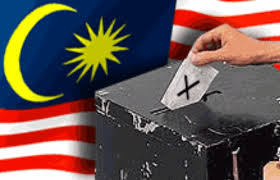 When Dato Seri Dr Ahmad Zahid Hamidi mentioned of election could be during Ramadhan, it was not a bad idea.

Ramadhan is the month of glory and spiritual elevation. Muslim abstain from eating and drinking from daybreak to sunset.

It is the month to surrenders one self wholly to Allah, observing the same abstention throughout the whole month in his thoughts, his speech, his behavior, his every act.

And the non-Muslims will indirectly observe the same by respecting the abstaining Muslims.

As witnessed during the by-election at Kuala Besut, Kuala Kangsar and Sungai Besar, election campaign was exemplary. The big crowd that came to hear Mahathir at Kuala Kangsar did not vote Amanah.

Election campaign time was limited so campaigners used the oppurtunity to sensibly deliver their campaign message without the nasty words and behaviour.

Alas, it did not happen. Election Commission announced nomination day on Saturday, April 28th, 2018 and voting will be on Wednesday, May 9th, 2018

Ramadhan is expected to fall on Sunday May 13th or Monday May 14th. 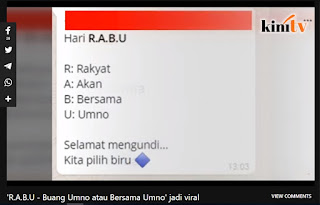 It upset many opposition supporters who claimed EC fixed it in favour of BN. Voters could not return. Tun Dr Mahathir claimed 500,000 voters from Singapore could not return to vote.

BN outside voters too well be affected. And Mahathir held his first general election in 1982 on a Thursday. In 1995 and 1999, he held it on weekdays too.

So stop being a #kelingkeralakutty full of auta and hypocrasy. If they fell strongly about voting, then they should take leave and return to vote. Stop being a spoilt brat.

In the first place, why the heck do they not register themselves to vote at their place of residence.

There is a tendency for outside voters to vote based on issues more related to the concern at their residence than the place they vote. It is denies the local voters their needs. 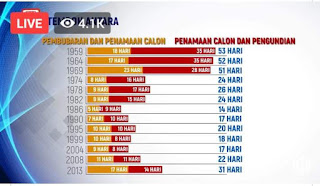 The dissolution of Parliament was done on April 7th, setting nomination day 21 days after dissolution is within the range of past practises.

For Muslim voters from out of town, it would have been timely to hold nomination on weekend, say Saturday or Sunday thus official campaign period is 14 or 15 days.

In Johor, Kedah and Kelantan, Sunday is a work day. Still similar inconvenience.

Fixing it on the 9th is not a bad idea.

The 10th would coincide with polling date in 1969 that led to the racial strife on May 13th.

That way government will not be accused of using the spectre of May 13 1969 of threatening the Chinese voters.

The year 1969 was the year Mahathir first ran for election in Kota Setar and lost.

He conveniently blamed it on Chinese because DAP Chinese was then responsible to for the racial riots through their subversive action to instigate racial hatred and the subsequent provocative victory parade that insulted Malays.

He claimed PAS benefited from the Chinese conspiracy and used this incident to incite Malays against Chinese and PAS for the rest of his life.

The truth is he was rejected because Malays in his community rejected the sharp tongued and quarelsome Mamak with an immigrant father from Kerala.

At the same time, he had always been contemptous of  traditional Islam and it was the reason he despised PAS till today. Today he has revealed himself as a beliver of the deviant Islam Liberal.

Mahathir went on to call for the resignation of Tunku Abdul Rahman and cited his lack of concern for the Malay.

It was his opportunitistic politics in the early stage. In deep analysis, he was never sincere about helping Malays and Bumiputera of Sabah and Sarawak. 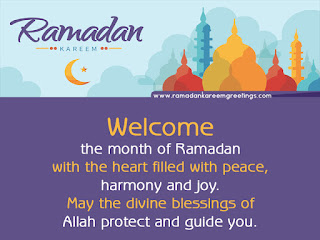 Coming back to the election date, it is not a bad idea to not remind us of that disturbing past and separate politics from Ramadhan.

By first of Ramadhan, we can forget about the politics and move on to gloat or mend ties. Whoever win or lose, it is ...

... but am just confident it will still be BN. In Maybank Securities latest analyst comment, one possibility is two third majority and the rest is still BN victory.

Opposition is making people think as though they can win. That way they can do the same post election theatrics and challenge election results.

Heard Mahathir have fixed judges in case of close result.

The advise to them is to stop deceiving themselves. Winning election is not about being loud on media social, banging on their issues, and clever propaganda but a game of numbers and strength of machinery.

Theresa Kok and Dato Wan Junaidi can win with a majority in the 5 digits but they win only a seat each for their party. 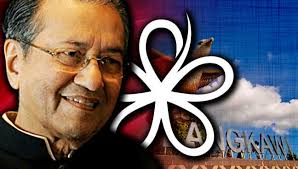 Mahathir is heard to run in Langkawi and it will only be confirmed on April 15th at their Langkawi rally.

He thinks he can turn Dato Nawawi's majority of more than 11,800 votes. Good luck because Mahathir name alone may not be enough.

Mahathir has yet to furnish the names of the three islands he alleged were sold to China's Chinese by MB Dato Md Bashah. The one island he mentioned is situated off Sungai Petani. WTF ...?

His rally on April 15th rally is on a site owned by a land syndicate, reknown cut throat on tourist restaurant owner and protected trouble maker with malice against local authorities.