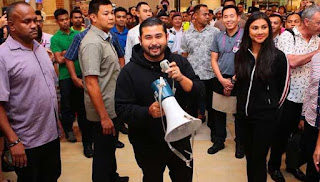 The Aeon Tebrau City was reported to be in a state of shambles after his Highness Crown Prince of Johor made an unexpected appearance to announce offering to pay up to RM3,000 per customer and RM1million to all shoppers present.

What motivated his highness to impulsively be generous is not sure. Only few days ago, he defended himself on FB for his statement that was intended for Tun Dr Mahathir. His highness denied he was not on anyone side but merely giving his personal opinion and advise for the betterment of Johor.

Thus one could assume that the impulsive generosity came out of  his highness's sincere concern for the betterment of Johor, even though it is for those who happen to be present at Aeon Tebrau City when he made that surprise.

Thought that was the only surprise for yesterday, but no ... his highness generous gesture was returned with appreciation by the family of Private Adam mentioned in his highness statement for clearing their family's name.

They agreed to a press conference arranged by former PPBM Vice President, Dato Hamidah Osman and her brother-in-law Azrul to express their apology to the royal family for not coming out to tell the truth.

As one of the sister told the press, they were denied from telling the truth for that long 30 years. The statement by his Highness must be an opportunity that presented itself. .

Mainstream and alternative media gave their coverage - Berita Harian here, The Star here, Utusan Malaysia here, here,  here and M'kini here. The You Tube video of the PC below would tell the story clearer.


When asked, Mahathir refused to comment on the Prebet Adam incident. At the time of the incident, he was Home Minister and his brother-in-law, General (R) Tan Sri Hashim Ali was for Chief of Army and later Chief of Defense Forces.

However, both the Home Ministry and Armed Forces / MINDEF did not issue any statement to correct the false rumour being spread out during the constitutional crisis that eventually led to the removal of certain powers of the Malay rulers.

It is believed that the rumour was concocted by propagandist aligned to Mahathir. This same myth remain to be perpetuated by few Mahathir's close confidantes till their death.

The truth of the Prebet Adam story was written into a book last year and it became a big seller.


Prebet Adam went berserk in Chow Kit Road in 1987 not because his brother was allegedly murdered by the late Sultan Iskandar but he was under tremendous pressure for the abuse physical and sexually  in camp. 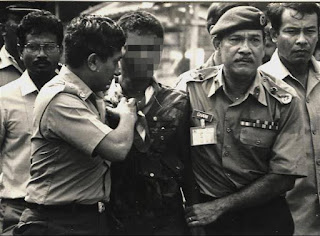 Mahathir is due to hold a political rally at Kubang Pasu tomorrow night and Langkawi on the 15th where he is expected to announce his candidacy at either of the two seats with Langkawi more likely.

He cannot claim innocence on the real Prebet Adam story. When his Highness made his statement, his supporters responded by concocting stories to dispute Prebet Adam's credibility for facing imprisonment for drugs and accused him of being paid to issue the following SD: 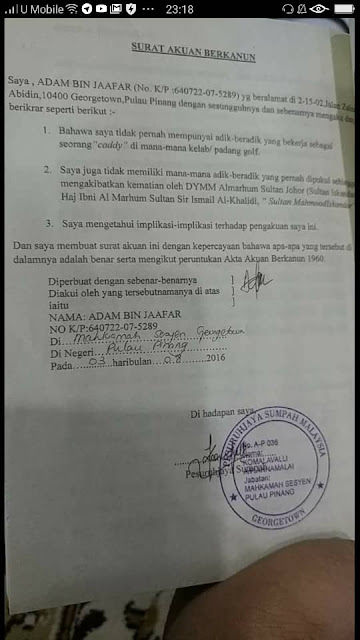 Today, it is not Prebet Adam but the remaining brothers and sisters were present at the press conference. Apparently, the family was also slandered as being bought despite Mahathir people tried to get to them. Wonder who Mahathir's errand boy (or Datok) from Penang would be?

Whoever he is, Mahathir can stooped to call for apology by Ambiga for not apologetic of calling Indian with the derogatory term of Keling. Maybe he should show the behaviour of an elder and statesman to not try to evade this issues affecting the Malay rulers.