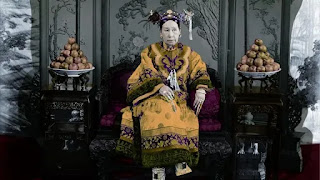 According to website Definitions, "Empress Dowager was the title given to the mother of a Chinese, Japanese, Korean or Vietnamese Emperor. The title was also given occasionally to another woman of the same generation, while a woman from the previous generation was sometimes given the title of Grand Empress Dowager."

"Numerous Empress Dowagers held Regency during the reign of an underage Emperor. Many of the most prominent Empress Dowagers also extended their control for long periods after the Emperor was old enough to govern. This was a source of political turmoil according to the traditional view of Chinese history."

Jung Chang's book entitled Empress Dowager Cixi caught the attention of the western media with her interpretation on the history of Cixi. In a review in UK's Guardian, Isabel Hilton wrote below:


This approving biography advances a vigorous defence of a woman whom history has often demonised as a venal reactionary: one who murdered without a second thought to protect her own interests, who squandered the national treasury on her own pleasures and who set back reform in China to preserve herself. History often has trouble giving powerful women their due and correctives are in order, but Chang's admiration for her subject can sometimes seem a little unqualified: the empress dowager in these pages was an enlightened, even caring ruler who drove through a modernisation programme. Had she lived just a little longer, China might have become a stable constitutional monarchy. As it is, Chinese citizens still cannot vote.

It was an interesting angle from a woman perspective to correct past wrong. However, Isabel came  off rather sceptical and asked whether it was justified:


Although most of Cixi's previous biographers have demonised her, others have been more measured. This is a spirited, if partisan contribution. Her role in crushing the reforms of 1898 and her support of the Boxer rebellion remain her most controversial actions. Did the reformers' plot against her excuse the dismantling of reforms that she was to borrow wholesale just a few years later? Jung Chang praises these as proof of Cixi's progressive character; others have judged them as too little too late, grudging concessions that failed to save the rule of the Manchu – outnumbered 100 to one by their Chinese subjects.


Although it has been 109 years (today) since the death of the Empress Dowager Cixi – also known as the “dragon lady” and the “old master Buddha” – who effectively ruled China during the late Qing dynasty (1644-1911) for nearly five decades, she still divides public opinion.

Born on November 29, 1835, she was chosen as a concubine for the Emperor Xianfeng when she was a young girl. She gave birth to the emperor’s son – the future Emperor Tongzhi – in 1856 and went on to live an extravagant and privileged life in the imperial court without concerning herself with the hardships facing ordinary people.

Read on here for a description of the life of power behind the Emperor Tongzhi and Emperor Guang Zu or in the movie, The Last Emperor, Puyi.

Emperor Xianfeng died in 1861 and his only male heir was 5-year old Tongzhi. Cixi became Empress Dowager and regent ruler till her son turned 17. However, Tongzhi died at age 19 and was replaced by her three-year old nephew Guangxu requiring her to return to the regency. 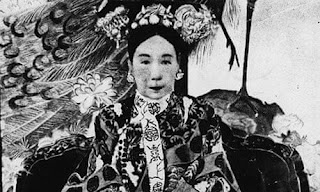 If a pictures is worth a thousand words, face features revealed natural tendencies hidden behind words and gestures of persons.

Cixi had the physiognomic features to support her psychological tendency. She had rectangular shaped face which denotes highly motivated, systematic, diligent and high levels of discipline.

Hunterswriting.com claimed such face come across as slightly dominating and ambitious. They are intelligent, analytical, hardworking and they possess self-control. They are strong and active. All the qualities of a natural leader.

Her lower thick lip indicates "strong character that is independent and self reliant. A tendency to be motivated and values physical gratification over emotional love". There was a slightly crooked feature in her lips which indicate tendency to be "scheming and wily".

The chin stands for the level of will power, stubbornness and tenacity. The more prominent, the more stubborn and stronger sex drive. 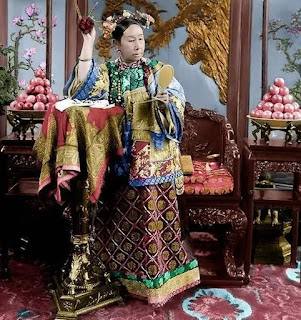 A decade earlier, Smithsonian's Amanda Fiegl wrote on the varying versions written by several other authors on the Empress Dowager. She concluded:


Through Seagrave's lens, the historical image of Cixi takes on a softer, sadder aura than the monster of Backhouse's creation. She was certainly a bright, ambitious woman, but her life was anything but a fairy tale.

"One might wish for her sake that her life had been just such a burlesque filled with Florentine intrigues and Viennese frivolity, because the truth is melancholy…Under those layers of historical graffiti was a spirited and beautiful young woman trapped in a losing proposition: …A figurehead empress who lost three emperors to conspiracy; a frightened matriarch whose reputation was destroyed as she presided over the decline of a bankrupt dynasty," he writes.


A Chinese historian, Jung Chang, began the re-evaluation of Cixi with her biography, “Empress Dowager Cixi.” Ms. Chang, who lives in exile, argues the empress brought medieval China into the modern age, calling her an “amazing stateswoman.”

But Ms. Chang’s damn-the-man portrait of Cixi is a tad too generous even for some sympathizers. How could the empress dowager have ushered in groundbreaking innovation when much of her career was devoted to her drive to preserve the imperial family that crumbled three years after her death?

The life of Cixi is a good lesson for other and aspiring Empress Dowager, especially those with similar physiognomy, of what could come in the distance ahead. Even squirrels occasionally falls to the ground.
at 1/30/2019 09:00:00 AM