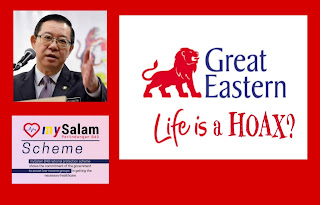 MyKMU warned the danger of the recently launched MySalam scheme.

While it looks good in theory, in which the Minister Dr Dzulkifly Ahmad is good at, practicality side only need to look at the failure of ObamaCare. Though erred on Zulkifly's academic background, satire blogger, Husin Lempoyang notice the same.

Perhaps the government side may not find pro-opposition portal MyKMU as credible. Then they may need to read what staunch pro-DAP Leslie Lau's writer, Boo-Su Lyn wrote in Malay Mail Online:

Boo-Su Lyn is as pro-PH and pro-DAP as one can get. She even questioned Islam as official religion which is DAP's spin version to constitutionally defined status as religion of the federation.

When Putrajaya Thinks It Knows All About Health Care

But the mySalam critical illness insurance policy and Peka B40 health screening scheme have already encountered controversy as key stakeholders like patients, doctors, and pharmacists don’t seem to know how the programmes work, even as they are targeted for roll-out in just a month or two.

The Ministry of Health’s (MOH) Peka B40 has gotten off to a rocky start. General practitioners refuse to provide health screenings under the scheme because they find the government’s payment too low, especially since they are expected to recruit patients themselves.

The newly set up government-linked corporation (GLC) under MOH called ProtectHealth Corporation Sdn Bhd, headed by Datuk Ab Latiff Abu Bakar, to run Peka B40 does not even have a company website. How much of the RM100 million initial fund went into setting up this GLC? Who else is on the board?

The Malaysian Medical Association (MMA) said they were not consulted about the Ministry of Finance (MOF) using Great Eastern Takaful Berhad’s RM2 billion contribution to pay back to Great Eastern annual premiums of RM112 per individual (at cost without profit) for 3.69 million people aged 18 to 55 from the bottom 40 per cent (B40) group for five years.

So essentially, Great Eastern isn’t really contributing anything since MOF will be paying it premiums regularly for the next five years. The insurance company will only fork out money when an insured person makes a claim for the one-off RM8,000 lump sum payout, as well as up to RM700 annually for maximum hospitalisation of 14 days.

According to MOF, the contribution was made in exchange for not having to divest 30 per cent of its Malaysian business in compliance with Bank Negara rules that stipulated a 70 per cent cap on foreign ownership of local insurance firms.

How is Great Eastern benefiting from this deal? Did it gain almost 3.7 million customers in one swoop? Even if only 10 per cent of them continue to pay premiums on their own from the sixth year onwards (the government hasn’t said what will happen after five years), that is still a whopping 370,000 customers. Were other insurance companies aware of this before Great Eastern was chosen for this magnanimous project?

Then comes the nitty gritty – how exactly will Great Eastern approve (or reject) claims?

Does this mean that specific mySalam recipients have already been identified, with their policies beginning on January 1? How did MOF select them since Lim insists that mySalam only applies to “ treatment at public hospitals”.

Did MOH hospitals and university hospitals give MOF data since last year on who their B40 patients (or specifically, those who get the Bantuan Sara Hidup aid) are? If yes, did doctors and hospitals first seek permission from their patients before releasing their information to another agency?

It is unclear what Lim means he says the RM8,000 payout is only meant for B40 patients who seek treatment at public hospitals. One may do diagnostic tests at a private facility to confirm an illness before going to a public hospital for treatment, or doctors at a public facility may prescribe a patient medicine that can only be bought from a private supplier. And if the RM8,000 lump sum benefit is banked in immediately to a patient upon diagnosis of an illness, how is MOF going to check if the patient uses the money at a public or private hospital?

If the mySalam policy began on January 1, do the insured know their critical illness benefits, the 36 illnesses covered, and more importantly, the exclusions in the policy?

According to my Prudential critical illness policy (I confess I only looked at the policy document proper when I started reporting on this issue), which provides a lump sum benefit of RM100,000 upon diagnosis of a critical illness, I will not be paid if my illness “arises directly or indirectly from pre-existing illnesses.”

My critical illness benefit is also not paid for “symptoms of illness that occur prior to or within 30 days after the policy has commenced, except for cancer, heart attack and coronary artery by-pass surgery and serious coronary artery disease in which a 60-day waiting period applies.”

If similar exclusions exist in mySalam, do the B40 know that their claims will be rejected if they started getting sick since November or December, or if they currently suffer any of the 36 critical illnesses?

It is also important to note that the lump sum benefit will only be paid upon diagnosis of an illness, which means that you must fork out your own money to pay for the tests to diagnose that disease.

What if the B40 want to do diagnostic tests at a private centre, especially cancer patients who do not have the luxury of time, before heading to a public hospital for treatment? A lung cancer patient told me that it takes six months after first diagnosis to see a specialist at a public facility.

I recently went to a private health care facility to get a painful knee checked out since it had been hurting for five weeks and I didn’t want to wait months more at a public hospital. The doctor recommended an MRI and X-ray, which cost me over RM2,000!

How will the B40 pay for diagnostic tests at private centres? Doctors and patients have also said that RM8,000 is not enough to cover cancer treatments even at public hospitals.

Yet, when confronted with questions, the finance minister got defensive and said: “How can you not support something that would help the poor?”

The road to hell is paved with good intentions. The poor may inadvertently end up being victimised by the mySalam scheme if it is not well thought out and implemented properly, especially if the government thinks that it knows it all and doesn’t bother consulting stakeholders like patients, doctors and pharmacists.

That brings me to my next point – why is MOF in charge of running a massive health insurance scheme and not MOH?

Even if MOF was the one that negotiated the deal with Great Eastern, it still could have passed mySalam to MOH to manage since, well, MOF doesn’t have doctors or medical professionals. Better still, the government could have set up an independent agency (separate from MOH and MOF) and appointed health care professionals to run mySalam.

MOH should not be regulator and provider simultaneously. In the United Kingdom, NHS provides health care, but the Care Quality Commission acts as an independent regulator.  There is also a separate independent body –NICE– that decides which drugs should be on the NHS. Unfortunately, in Malaysia, the MOH performs all three functions.

MOH is ultimately responsible for Malaysia’s health outcomes. The government surely cannot expect MOF to do MOH’s job in protecting patients, simply because the former is not qualified to do so.

Most importantly, it is MOH’s responsibility to repair an ailing health care system for generations to come, instead of relying on a quick-fix for five years. 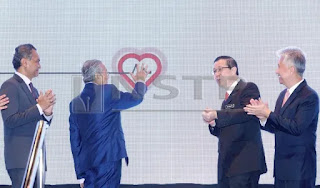 Despite being saddled with massive inherited debt, the government will continue to roll out initiatives to help the people, especially those in the low-income group, or the B40.

This was the assurance given by Prime Minister Tun Dr Mahathir Mohamad, who launched the national B40 protection scheme known as “mySalam”, today.

“Although we inherited financial constraints (from the past government), it will not prevent the government from introducing people-friendly programmes such as the mySalam scheme.

“(The government) may seem to be cautious in executing such programmes, but we will make sure such efforts will reach the target groups.

“And, we will also go all out to generate funds, via innovative and alternative measures, to ease the people’s burden,” he said. 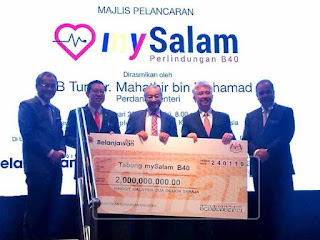 Dr Mahathir was also upbeat about mySalam’s substantial seed fund of RM2 billion provided by Great Eastern Insurance and Takaful – money which will benefit 3.69 million people aged between 18 and 55 in the B40 group.

Anyway, bab menipu involving MOF mesti Tony Pua punya kerja. He thinks he is too clever for the rest of Malaysia to spot. Dump his Oxford's PPE degree. He is just purely PP ... political propagandist.