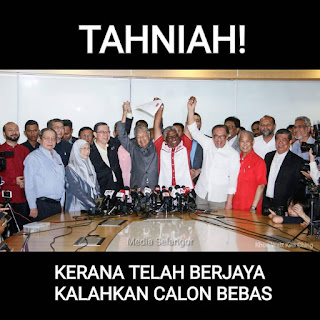 The former DAP MP for Telok Intan, who once uttered his opposition to the status of Islam as "official" religion of the Federation, wasted his tireless effort to annul MIC's Sivaragh win at GE14.

DAP and PH ran an aggresive campaign at this BN stronghold seat, which was won by BN by slightly more than 500 votes at GE 14.

A win would have strengthened DAP's position within PH and to pull the strings on an exasperated Tun Dr Mahathir, who both DAP and PPBM find each other overbearing.

DAP did not pull any stop, including abusing the position of their nominated EC Chairman, Azhar Harun. 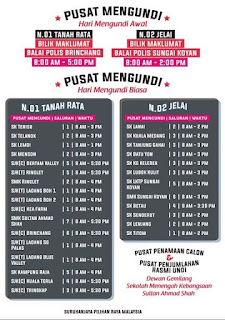 EC announced earlier closing time for polling station with Malay and Orang Asli majority voting district to cite security reasons. They were no early closing time for GE 14 at CH and no communist ambush on the ballot boxes reported.

Azhar closed one eye to the long list of infringement of election rules by PH. He said there was nothing wrong with DAP campaign workers openly giving money to Orang Asli voters under guise of petrol money. 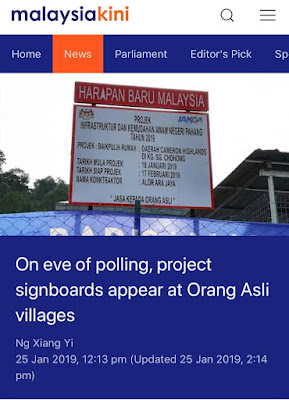 The misuse of government facilities was blatant, especially by Ministers and Orang Asli Department.

Their vehicles could be seen everywhere. JHEOA personnels in PH T-shirts were directly involved to "kidnap" Tok Batins for brainwashing and putting up PH project signboards at the Orang Asli settlements the night before polling. 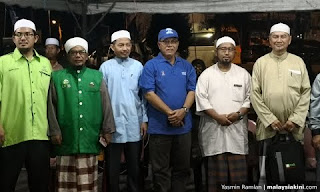 On the last day of campaign, DAP and PH was up to dirty tricks such as falsely accusing Ramli for involvement in Memali. They hope to dissuade PAS supporters from voting BN but to no avail.

There was also infringement on polling day too.

One can argue BN used to do the same but had been taught a bitter lesson. Now, PH is not putting action into the BERSIH words spoken loudly.

EC Chairman has since taken the defensive stance to say he is glad of the greater awareness on election rule in this by-election. Too soon to say before the Semenyih by-election as it will be bitterly fought to stop BN turning around in political fortune.

The CH results showed dirty trick may not pay off. 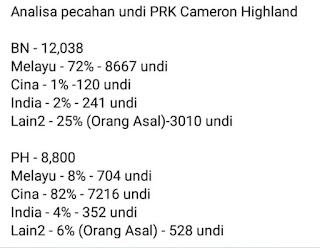 Blaming on the past does not work anymore.

Mahathir went to the point of calling Najib a bully like a Jew. It was him who let the Israel cricket team in to play in an international competition in KL.

They could try the excuses and blame game again in Semenyih and Rantau to a public angered by drastic budget cut, senseless reallocation, rising prices, and dampened economy.

And continue to cook up more charges with incomplete investigation and without papers. 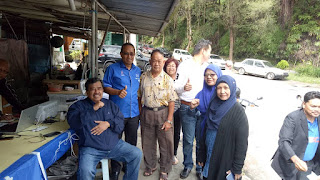 While Chinese votes still contributed 82% of to the lesser votes of Manogaran, the statistics did not show the comparison to GE14 statistics and the number of no show.

Lim Kit Siang expressed early concern as he pleaded for outside voters to return. It is believed Chinese gave illegal bookie 1,000 votes to pick for a BN win.

There were indications from Channel 3, 4 and 5 of young Chinese voters protest. 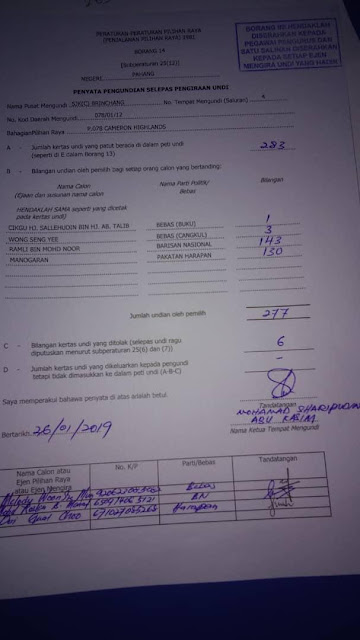 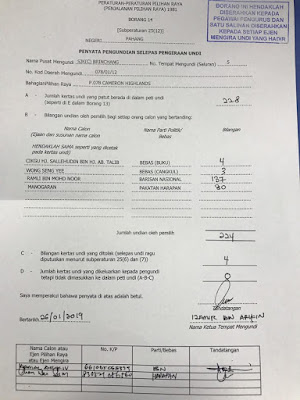 A former DAP candidate told this blogger this morning that the loss is attributed to the public disenchantment with the economic mess arising from Lim Guan Eng and Tony Pua's amateurish fiscal management. 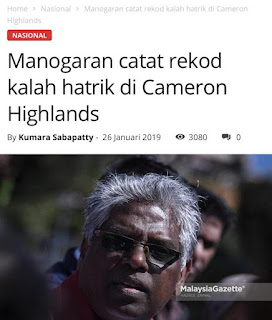 It answers pro-PH analysis citing the excuse of lower turnout. It is PH side that suffered the lower number. 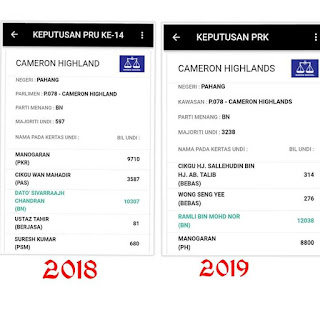 Manogaran can kiss Cameron Highland and even his political career good bye.

Pemuda UMNO Chief, Dr Asyraf Wajdi saw similar reason and gave tribute to the strong cooperation with PAS and within BN for the victory.

Hadi saw it as indication of people rejecting PH for not fulfilling their promises. 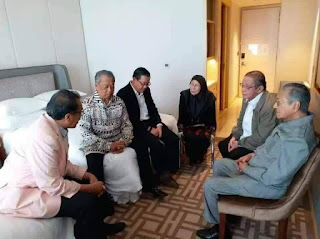 It is still premature to assume the CH win is a turnaround for BN without proper survey and study, but an emerging trust deficit against PH is likely.

It could be the start of a politically challenging phase or even a bigger turmoil ahead for fragile PH.

More so, the friction between them is unabated with Mahathir's situation described by sources within PPBM as exasperated. Witnesses observed his voice was quivering at Sungai Koyan.

One analysis in Malay from a WA group summarised the political implication of the result as below:

The PPBM grassroot still believed the plan to get UMNO MPs to jump ship is still in play. Actually, it has stopped and both Mahathir and Anwar are at a standstill.

That is not what Mahathir, who is used to being few steps ahead, is comfortable with. Mahathir could not move further in Sabah without annoying Warisan, but is hoping to get Sarawak's GBS support.

He need deep pocket but the pocket is in Guan Eng's pant.

In the meanwhile. government is rudderless with Mahathir more concerned to deny Anwar the PM-ship and gaining control than governing.

He said at Sungai Koyan that he intend to stay till his death ("kerja sampai mati"). It is heard that something is to happen after Chinese Year.

If it does not happen, Anwar and DAP will put more pressure on Mahathir. Latest being call for GLC reform by NGOs and exchanges between Terence Gomez and Tun Daim over patronage.

Dato Hamidah Osman called for Parliament to be dissolved and snap election to give direction to government. ISMA made the same call but cite PM's lost control over cabinet as reason.

Rather than give the government totally to Anwar and DAP, Mahathir could resort to dissolve Parliament. Snap election after Semenyih?
at 1/27/2019 02:41:00 PM