No "auta keling" stunt to cover-up commodity "kok" up 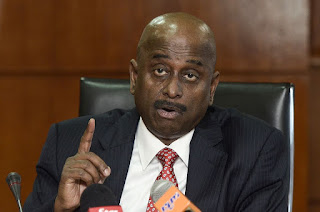 The Edge headlined it as MoF bagged RM780m as middleman in land sale to EPF. With such headline, one can expect Daim's cynical "market wizard", Tony Pua to spin another 1MDB-linked expose and claimed this was the money used to pay for IPIC deal.

One can expect Dato Najib to be called in for questioning by MACC, and immediately, set #5 of charges will be made against him without neither the charge sheet nor Investigation Paper ready.

If so, it would be the most extreme attempt to either stop Najib's FB troll of Lim Guan Eng that embarassingly resulted in U turns in policies or divert attention from Teresa Kok's failure to revive commodity prices and livelihood of farmers. 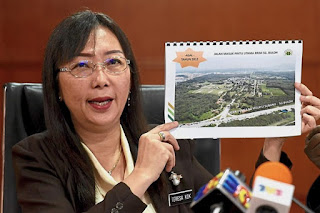 Teresa's last effort was a political nonsense to get her Deputy to ask on Malaysians to consume more palm oil.

Her latest political nonsense attempt to divert attention, from her inability to communicate sensibly, failed miserably.

Sankara Nair, Anwar Ibrahim's lawyer that bloggers in the blogosphere then suspect was Teresa's boyfriend or lover and now MRB chairman, made a boo boo in the extract from The Malay Mail Online below:


MRB chairman Sankara N. Nair claimed that the individuals behind ATNB seemed to be shrouded in secrecy, and neither MRB nor its board has any details regarding ATNB.

Apparently, the only ones who are privy to the information are the Auditor General’s office. MRB has requested information regarding ATNB.

The minister in charge of MRB back then was Tan Sri Bernard Dompok, who held the Plantation Industries and Commodities portfolio from 2009 to 2013.

A former company CEO of a GLC felt it is ridiculous for the board of MRB to plead ignorance.

More so, Sankara was not a member of the board then thus he would not have known.

Off course, the member of the board, especially the government servant, would sway like lalang to save their position and allowance thus willingly lie to verify Sankara's claim.

It still does not make it sensible.

"It is impossible to claim the board is not in the know and yet the land was transferred, news of this development have been out there for years, and work has started," the former CEO said.

If the then board disagree or not properly briefed, they would not have endorse the land transfer. No member of the board resigned in protest. 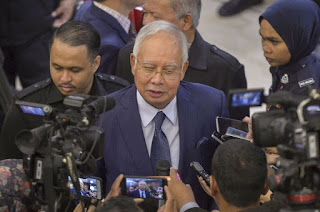 Najib pointed out that Aset Tanah Negara Berhad (ATNB) ― which MRB had sold 2,800 acres of land in Sungai Buloh to for RM1.5 billion in 2010 ― was a government-owned company.

The former Barisan Nasional (BN) leader also noted that Kwasa Land, which bought the piece of land from ATNB two years later in 2012 for RM2.28 billion, was a company fully owned by the Employees Provident Fund (EPF).

“This means that Teresa Kok has accused BN of forcing the government to sell government land to the government and after that gave an opportunity to EPF to reap benefits of tens of billions for their depositors,” Najib said on Facebook.

“How despicable of the previous BN government to take care of their cronies, the EPF depositors,” he added sarcastically.

Najib claimed that Kwasa Land had developed the land it bought from ATNB to build a new township, including residences for 150,000 people with a gross development value of at least RM50 billion. He also highlighted the MRT station there.

“The development of Kwasa Damansara in Subang was among the steps in the Greater Kuala Lumpur Strategic Development Project, as per what was announced in the 10th Malaysia Plan,” he said.

The former prime minister said ATNB’s land sale to Kwasa Land in 2012 was at RM18.70 per square foot, which he claimed valuations at the time had described as a reasonable market price.

Kok told a press conference earlier today that MRB was shortchanged by RM800 million through a direct sale of the land to ATNB and that the government rubber research agency has filed a complaint with the National Audit Department.


As a government agency with annual budget from government, it is not their business to be profiteering from asset sales. The Finance Minister has the prerogative of managing government finances and asset to achieve, in this case, win-win-win to more parties than MRB.

Another part of the extract from the Sankara report reads:

When asked if the Board will be lodging a report against the previous Cabinet including Dompok, Sankara said he believed it will be a natural progression of MACC’s investigation.

“Once we have lodged a report to MACC, we believe the MACC will take it up in their investigations. We don’t need to lodge a specific report against Tan Sri Bernard Dompok,” said Sankara.

Did we not guessed it?

Tun Daim already warned DAP to stop the theatrics to blame everything to Najib. The people are not interested to hear another expose to blame neither Najib nor the previous government.

Another repeat will only make Najib's FB more popular and increase public sympathy for him.

The public had enough of excuses and expect immediate results or at least clear plan without the political nonsense from the new government.

The poor rubber and oil palm prices was a result of, as Dato Ahmad Maslan puts in, strained relation with China.

Tun Dr Mahathir's politicking contributed immensely to it and now Tun Daim is on leave either trying to mend the problem or is up to something with the announced ECRL to be restart.

The direct blame and should be held personally responsible for the low commodity prices, excessive inventory and turning smallholder farmers to poverty has to be Lim Guan Eng.

Arrogant Guan Eng lambasted and insulted the first group of China's entourage visit arranged by an NGO, who after the general election in May 2018, came to pay respect to the newly appointed Minister of Finance.

After they reached the end of their tolerance, the Chinese retaliated to say they know about Taiwan.

The sharp fall in commodity prices and overhang of unsold stock is a DAP "kok" up, so no "auta keling" stunt.

I must also add that commodity prices are based on market forces worldwide and has nothing to do with the Minister. This is one of the weaknesses of commodities and economies that depend on commodities : prices can and will fluctuate. Malaysian Palm Oil does not have a good name overseas due to environmental concerns and campaigns to boycott palm oil do not help.