DG Immigration: By hook or by crook and the pot of gold? 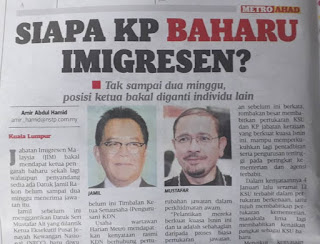 In 2012, this blog coined the word PTD Mafia to express disgust with the degradation in the British copied system of elitism in the civil service.

The issue raised was with regard to self serving PTD in the civil service pay raise and covering up their own in the film censorship of animation movie, Beauty and the Beast fiasco.

When the taskforce NRRET was doing raid against rampant smuggling activities in 2016, it was partly due to PTD Mafia dragging their feet, doing lip service, covering up their own and in some instances, on the take from criminal syndicate.

Civil servants had to turn a blind eye as to not bring out the fury of their PTD bosses.

All those raid done by NRRET came down to nothing because the then AG, Tan Sri Gani Patail and assisted by a Jessica did not press charges. There were rumours as to why it happened.

The MACC boss then was Tan Sri Abu Kassim and he kept quiet. Not sure, what he meant to claim he and Gani established NRRET to address smuggling activities but misused for politics.

Why then the political rebranding of NRRET to NFCC and claimed as a new centre to plug the leak on financial frauds such AMLA causing money to flow out, but turned out merely to replace NRRET?

What happenned to Shafie Apdal and Lim Guan Eng files? 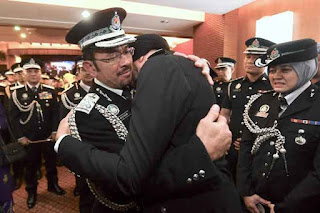 There is no need for establishing NFCC for rebranding and maybe waste money with more new centres quite typical of PTD empire building.

The money for NFCC is best re-channeled to MACC, which had to face series of annual budget cuts.

With manpower of only 200 people, what can the Immigrant Chief, Dato Mustafar Ali that was moved away from a 5,000 force department to head NFCC do?

NFCC sounds like a cow fattening farm. Will a Miss Tan also move to NFCC too? 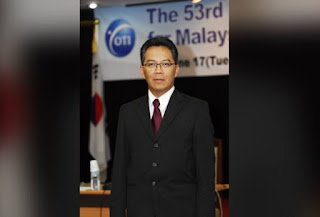 Not finish with PTD Mafia.

There is a big noise within Immigration when it was announced that Deputy KSU (Management) of Home Ministry, Datuk Jamil Rakon was to be the new KP of Immigration.

This was part of the major civil service reshuffling in early January that was criticised as political and act of cronyism by the new KSN, Dato Seri Dr Ismail Abu Bakar. If it is denied, there is likelihood these PTD Mafia is in their usual elements. 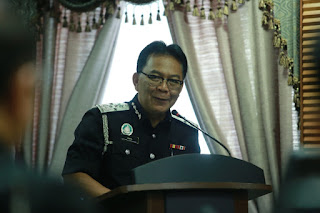 The hue and cry at Immigration was because majority of staff felt Jamil was not suited for the position. He lacked the experience and not as competent as one Dato Indera Khairul.

It was also odd that the current KSU of Home Ministry, Dato Alwi Ibrahim was announced for transfer to Ministry of Public Works but still remained at KDN.

The appointment of Jamil was met with accusations of cronyism and intention to control multi-billion ringgit project at Immigration. Social media was talking about political intervention to want Jamil there.

Questions are raised on the effectiveness of Lembaga Kenaikan Pangkat Perkhidmatan Awam chaired by KSN and members include KPPA, KSP, KP GIACC. etc.

Pressure was put on why the Minister, Deputy Minister and even Press Secretary, Dato Ainon kept quiet and mummed on the issue raised. The KSU for Home Ministry was questioned for keeping silence and playing safe.

It turns out there is a RM3.5 billion IT contract for Immigration.


This is an addition to the pot of gold (lubuk) for importing labour and human traficking.

It could be something Tan Sri Rashid Abdul Rahman described as stupid to not give the contracts to PPBM Division Heads as it is about winning next GE "by hook or by crook".

The Minister responded to deny knowledge on Jamil's appointment as he was not consulted.

Muhyiddin admitted appealing against the transfer of KSU Alwi, who appointed Jamil. The perception of Alwi among civil servants is that he is weak, practise cronyism and play safe at KDN. 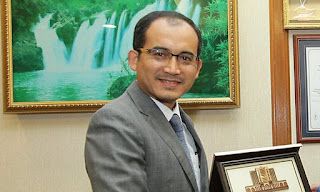 After much noise, KSN change the appointment of Immigration KP to Dato Khairil Dzaimee Daud. 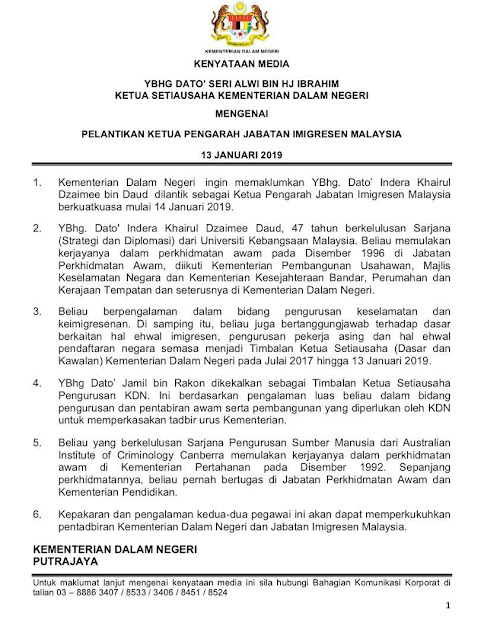 However, Khairil should hold back on his aspiration to make the agency the best in the world.

Too lofty when considering human trafficking is done openly at KLIA with the help of airport securities and the operation to issue the Malaysian passport he so proud off is a national security threat.

Too tired to elaborate.

Source claimed MACC is doing investigation on the RM3.5 billion IT contract. Will it find anything?

Not sure with Abu Kassim once openly admitted the complexity of going after top KSUs as they determined promotion and budget at MACC.

What happenned to all KSUs being investigated by MACC?

Yet, they could investigate and immediately charge Tan Sri Dr Irwan Serigar for an irrelevant charge and it will be a waste of taxpayers money.

However, in 2017, Irwan did a typical PTD mafia signature move to manouvre himself into position of interest at Bandar Malaysia for his retirement plan.

The PTD system should be done with.

What can you expect of civil service with the elite top echelon of only graduates in fields such Usuluddin, Malay studies, etc. to develop public policies in a highly complex and competitive environment that requires technical understanfing and specific competencies?

He was KSU Kementerian Pendidikan after Mardinah.

Change of Immigration DG nothing to do with axing RM3. 5 billion contract, Says Muhyiddin