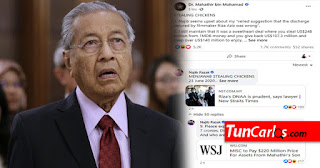 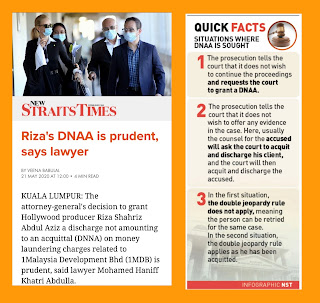 Mahathir obviously feared Dato Najib making a comeback. At the same time, he has to depose Tan Sri Muhyiddin and recently made a ridiculous claim that Muhyiddin made bigger damage than Najib. He followed-up on Najib with an FB posting to repeat a similar line of logic entitled Stealing Chickens.

Mahathir's comment on Riza Aziz is the usual simplistic soundbyte, which only satisfy his intellectually shalow diehards. It is technically or more precisely, legally inaccurate.

The old tiger is no more as sharp. It hardly conveyed the desired message and does not attract sizeable followers.

Mahathir's own lawyer, Hanif Khatri said that Riza Aziz's settlememt is prudent. He should seek the advise of his lawyer before shooting his mouth.

Shot his own foot

There on, Mahathir shot his own foot to repeat a recycled claim he never gave government contract to his sons: 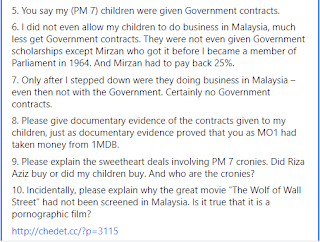 It confirmed his senses and faculties are failing. That sort of soundbytes does not have any more bite today, but yet he thinks it still work.

For one, people know it is not true. Secondly, there are people like yours truly familiar with this recycle argument and ever willing to give the answer. 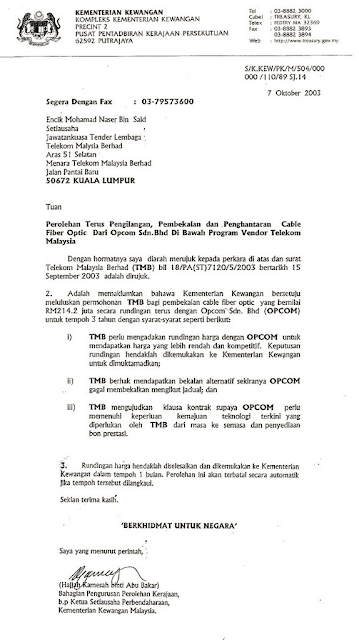 According to Tun Carlos.com, Najib FB's admin went to the extent of posting the response in its entirety on Mahathir's FB. 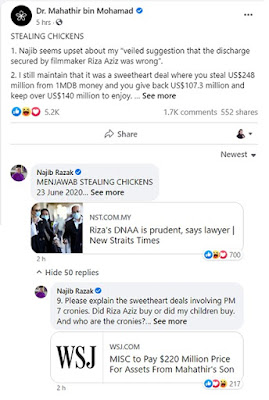 That attracted hundreds of comments against Mahathir and made his admin team defensive. 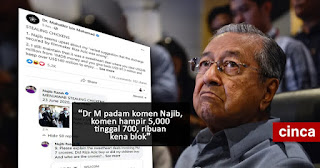 At 1 AM last night, The New Malaysian Times reported 500 of the 1,500 comments were removed and criticised Mahathir for curtailing freedom of speech in deleting and banning netizens’ comments.

That is Mahathir, the despot dictator that suppressed free press and speech, and now trying to make a comeback.

A leader unable to take charge of the national debate is no more relevant. More so, for leaders in fear of opposing views.

Like Mugabe, he will fail because he is no more relevant.

His 22 months messed up than Selamatkan Malaysia. Another 6 months will not serve any purpose but disrupt any chance of economic recovery.

Your paymaster Najib will be in jail soon and Anwar will not be PM. Mission accomplish Tun M!!

Maturity still denies you. Many ways to be critucal than aspersions and presumptions

Whose going to court. Denying does not help your argument or messahe. Only denial.