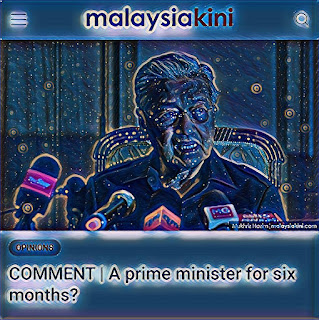 Why 6 months? Will it actually be for 6 months?

In the meanwhile, Gopal Raj Kumar published another open letter to ponder into the reason why Mahathir wants to return for 6 month. 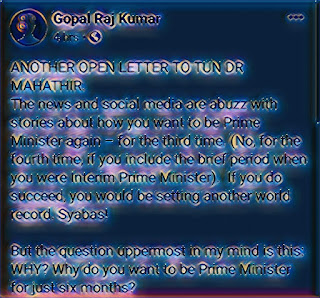 Is it to finish your unfinished business like keeping all your pre-GE14 promises?

Come, come, Tun, you had since May 2018 to fulfill your pledges.  Do you think you can accomplish  in the next six months what you failed to do in the previous 20 ?

That’s unrealistic. And then perhaps, you wish to groom the next Prime Minister over the next six months?

Come, come, in 20 years you could not groom a suitable successor as you plotted against and caused their ignominious departure from public life. And now you wish to do it in half a year?

Or, do you wish to use the next six months to leave behind a lasting legacy? But you had 50 years since you wrote The Malay Dilemma to complete your hidden agenda. You  can’t now  do it in the next six years.
Or,

do you wish to leave something for your family? If so, Tun, please don’t bother. They are all well-settled. They have been taking very good care of themselves, thank you.

do you want to leave something for your friends? Why would you want to do that, especially when many of them have already abandoned you and jumped ship.

do you need six months to right your wrongs—ie destroying the judiciary, interfering with the civil service, etc. But how can you begin to undo these mistakes when you, as yet, have not acknowledged them as such?

Tun, do you want to use the next six months just to revisit your regrets ?

It’s too late for that too

In any case, Tun, it is too late to say you had never intended to be a Machiavallian.

But it’s never too late for one thing: to say Sorry.

Now, what do readers think? 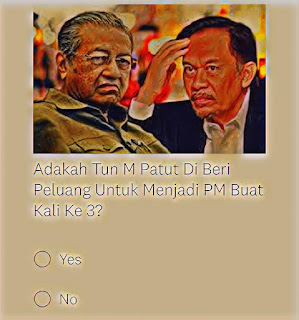 There is always the commentary blog.

The Unspinners blog is conducting a survey to find out public acceptance to Mahathir's third time return for 6 months HERE.

Readers could visit the site and just click YES or NO to the proposed idea. 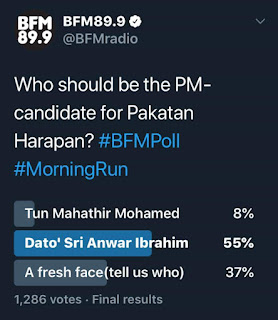 Other surveys conducted leads to a resounding NO. Maybe this time it is different. 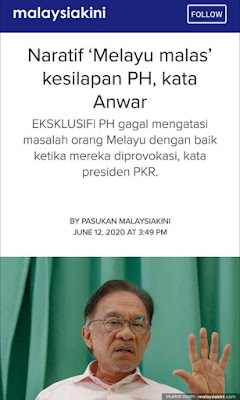 As far as this blogger is concern, the vote of confidence has a low chance of succeeding.

This is especially so with the possibility of many more MPs jumping ship to support Tan Sri Muhyiddin.

This plan of putting up Mahathir was mooted by DAP's Liew Chin Tong. As far as facing up to July Parliament, it seemed Chin Tong did not live up to his expectation as DAP's Political Strategist.

If one were to ponder a little bit on the possibility of Anwar being offerred as PM candidate for GE15, one could find the answer.

The next GE15 will be determined by the Malay wave. PN is being dubbed as Malay Pribumi government and the opposition already started using the racism narrative.

Anwar had recently questioned PH government use of the narrative "Melayu malas".

It is a tagline closely associated with colonial past and in contemporary politics, to Mahathir. And, not quite a veiled criticism of Mahathir in which PKR has confirmed their rejection of the Mahathir 3rd time PM plan.

Complimenting Mahathir's narrative, DAP and Council of Emminent Persons policies was to undertake wholesale removal of affirmative action programs and dismantling of institution dedicated to that agenda.

DAP and their Malay satellite party, Amanah plan now to use Mahathir to make in-roads into the Malay voters heart.

Notice DAP recruiting pretty Malay lass and lads to reach out to Malay new voters. Lim Guan Eng and Tony Pua have been heard piling a war chest to buy the Malay heart.

For DAP and Amanah, Anwar will not serve the purpose. He is too soiled and associated with liberalism to have any appeal to non-PKR Malay diehard.

They need Mahathir for their survival. Anwar's yearning for PMship no more priority.

Not ruling out a deviation 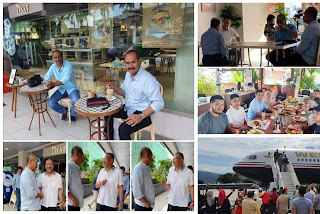 One can plan but there could always be a deviation from the plan.

Muhyiddin may not secure substantial buffer for the stability of the PN government. Or the buffer gain come at too expensive financial or political pricetag.

PH Plus could be planning for snap GE15 but opportunity may come without the risk of being annihilated by Muafakat Nasional in the Malay hinterlamd during general election.

If the families of Dato Seri Azmin and Dato Hishamuddin Hussein Onn happen to bump into each other in Morocco before the Sheraton move, Azmin, Hisham and Mahathir happen to be in Langkawi over the same weekend.

UMNO grassroot view Azmin with a wary eye for his last minute political moves and demands. There are unhappy voices of him occupying Sri Satria and the Deputy PM wing of PMO.

Sources from within PAS have warned that Azmin is still in communication with the black PPBM faction. Already someone is testing the water with rumour of Mahathir meeting Tuan Guru Dato Haji Hadi and Azmin.

Azmin is seen as slow to open all his cards for PN. Perhaps, that is all he has.

One can view that Azmin and Hisham need to maintain their relevence in the future political configuration.

Another possibility is the Langkawi appearance is mere coincidence and its the pro-Tun people exploting it to apply pressure on Anwar.

Madey need another 6 months to put Anwar back in prison..he always said..i may had mistake..but sacking Anwar was not one of them...