The 2 year tenure as PM was initially to payback the money through contracts, privatisation and monopoly business licenses.

Unfortunately the economy was bad due to Lim Guan Eng's mismanagement and investors lack of confidence of PH government.

It resulted in Mahathir unable to recoup the money spent. He needs additional 6 months to get it back.

Though the question remained as to why Mahathir resigned then, there is logic to this political hypothesis.

When Mahathir was Interim PM for that brief moment, he announced a RM20 billion economic rescue package. Critics to the plan claimed it is no rescue package but projects for cronies.

Worse still, a source with high level contact in Government revealed the rescue package was all Mahathir's old recycle babies.

It was hardly a rescue plan to revive the economy. 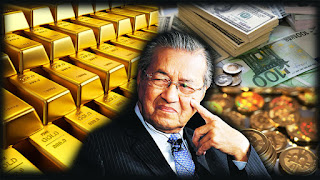 This blog have repeatedly wrote that to understand Mahathir's politics, one should always "follow the money" and hound the latest business of interest to Mahathir.

It was in 2014 that this blogger developed doubt on Mahathir's bigger agenda and realised him covering up his greed for money.

We discovered new information behind issues he raised against government of Tun Abdullah Ahmad Badawi in the bid to topple him.

For instance, Mahathir's argument for his planned crooked bridge to replace the Johor causeway to Singapore was erroneous.

The issue he raised against Singapore Air Force fighter jet intrusion into Malaysian airspace was dishonest. He knew of the defense arrangement with Singapore for use of air space.

The cooperation between Malaysia and Singapore on security matter is far closer than what is known in public and usually being politicised.

The low price of water sold to Singapore was his doing and yet he blamed it on Abdullah.

Anything to do with this second generation Kerala Mahathir will usually be motivated with money.

When Mahathir was attacked for IPP, we seek to his staff for material. There was reluctance. The staff murmered of pointless effort as opposition and opponents will keep using it against him.

By end January, words reached yours truly of a secret meeting between Mahathir and Azmin Ali in London for the Christmas holiday.

Government sources claimed it was a family gathering but we laughed it it off as the Ali family have been in a family fued for decades.

When Mahathir's staff and confidante was asked of the meeting, the reply given was he was willing to talk to anyone to discuss the Malay problems. What a cliche!

It was followed up by a question why Mahathir did not do follow-up on the improper merger between ECM Libra and government owned Avenue Asset involving Khairy Jamaluddin and Dato Kalimullah Hassan.

He replied, "Don't you know we brought down Pak Lah not because of ECM Libra and corruption, but because of jambatan bengkok and double tracking?"

It was all about money, not the narrative behind his political move to bring down a Prime Minister.

It created the doubt that he could not overcome to convince us in the April 10, 2015 meeting to support his seven reasons to bring down Najib.

The just terminated TV3 news Managing Editor, Firdaus Abdullah was in the meeting. Recording of the meeting is also available. 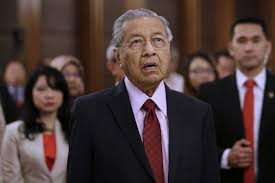 Syukran, Allah had given us the hidayah to lead us to the truth. Unfortunately, our friend, Matthias Chang only recently realised he was made use of by Mahathir.

He left it purely to Dato Gopal Sri Ram to fix his victims. There was no sincerity to pursue justice or eradicate corruption, cronyism and nepotism.

His hypocrasy was too blatant.

Only now he is worried that Gopal and Tommy Thomas were not up to it to secure a conviction in any fair trial on the 1MDB-related cases against Najib and UMNO politicians he intend to terminate.

Court ruled for UMNO's money to be released. All AMLA cases against recipeints of alleged 1MDB money bombed out. Mahathir's nervousness is visibly obvious when Riza Aziz's settlement was  announced.

His immediate reaction was to do a political spin to paint a picture the settlement was a plea bargain and admittance of guilt. Riza merely agreed to pay compound. It was not plea bargain because trial has not started.

It is a legal situation a former judge described as nolle prosequi. Prosecution couldn't proceed. The reasons will be discussed on a later posting.

Yesterday, Mahathir put up a sequel, Plea Bargain II to the earlier blog posting, Plea Bargain. This time he used the layman political argument of chicken thief being imprisoned when found guilty, but kleptocrats of hundreds of millions could escape judgement.

The answer is simple.

Petai (stinky beans) and chicken thieves were found guilty without doubt by the court, but Riza is not. It is the reason Mahathir is spinning using plea bargain, a non-existence legal practise in Malaysia. 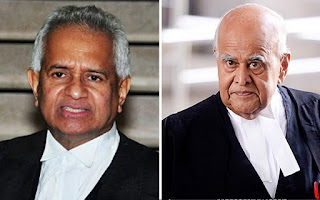 Mahathir's appointed AG, Tommy Thomas and case designer and Mr Fixer, Gopal failed to secure any proofs. A court insider e-mailed us the following reply to his latest posting:


Tun M, why are you whining so much.  This is old news don’t you have anything else to say.

You are boring, people are yawning reading your nonsense.

But since we are on the topic, perhaps your irritation is not the fact that Riza Aziz has been granted a DNAA but rather with the fact that it was the Attorney General Tommy Thomas, that you appointed who was in favour of granting him a DNAA on condition that certain assets be forfeited and a compound be paid.

Or perhaps it’s the fact that your buddy Dato’ Sri Gopal Sri Ram, the lead prosecutor appointed by your favourite AG –Tommy Thomas with your consent of course, who was also the lead prosecutor in Riza Aziz’s case, agreed to move the court for order for DNAA.

Tun M, you must be irritated because its your people who freed Riza.

On his rambling on money laundering, what is the effing predicate offense?

Without any primary crime established, AMLA charges are good for the rubbish dump.

AMLA should be applied for terrorism and organised crime. For criminal cases involving corruption, abuse of power and CBT, DPP should prove the act and not conveniently use AMLA. Ada faham old man?

1MDB issue was also about money to Mahathir.

It was his revenge for acquiring the IPP belonging to his IPP cronies. He also avenge Tan Sri Vincent Tan for Najib's refusal to his election donation in exchange for projects scheme.

The events with singapore is well documented.

The rest of your facts are doubtful at best