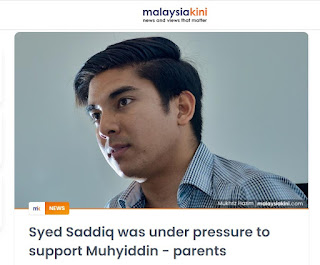 At the rate Bar Council is clueless to rile up support to defend Justice Nazlan Ghazali for his bias judgement in the SRC case, the possibility of Dato Najib getting a mistrial is as good as sealed. It will prove that Mahathir, yet again, interfered and manipulated the judiciary.

It is pointless to repeat the list of issues mentioned too support the view as it has been repeatedly discussed at length. The integrity of judiciary is tarnished whether judgement on Najib remain or mistrial declared.

Better for Federal Court to acquit and face up temporarily to public critics, but its not as badly damaged that investors lose trust with the Malaysian judicial system.

Meanwhile, Muhyiddin repeatedly said he does not interfere in the judicial affair and allow 1MDB cases takes its own course. Unfortunately it was never believable because of his vindictive and manipulative politics.

More so, his own lawyer, Rosli Dahlan was instrumental in the long list of civil suit made by SRC and 1MDB. Initially a long list was named as defendants, but eventually the list was shortened including withdrawing known accomplices of Jo Low that it was too obvious it was targetted at Najib.

That explained Muhyiddin's outburst towards Najib when he picked on Muhyiddin's lame denial of allegedly receiving political donation from Ultra Kirana.

Yesterday in court during the trial of Syed Saddiq, his mother testified that Saddiq was charged because he did not support Muhyiddin. Whether it is a valid defense for her son, it is a yet to be disputed court statement that Muhyiddin interfered in the court matter.

The social media is villifying Saddiq for dragging his mother to defend his wrongdoing. He is being dubbed as spoiled son or softie sue. He did drag his parents with the claim that part of the money found in his safe belongs to them.

However, there is truth in the mother's statement and possibly it is intended to show the case has political motive and like UKSB, Yayasan Akalbudi, 1MDB-Tanore, 1MDB audit, IRD, SRC, etc, it is another selective prosecution and political persecution.

During the time of Muhyiddin's premiership, a former reporter told yours truly that Muhyiddin gave Syed Saddiq a chance. He is a young man and naturally makes silly mistakes. It could be a lie but it does imply he was instrumental to hold back AG from immediately prosecuting Saddiq.

The problem for Saddiq is that his seemed to be a clear open and shut case. In the thick of the expose and subsequently well reported investigation, the issue was silenced within two weeks and it was after MACC raided his home. The investigation must have been completed within a short time.

The political element is possible. Saddiq joined Mahathir to resigned from PPBM in February 2020. He was investigated at around March 2020 but not charged till July 2021.

For an open and shut case, that is a long wait before being charged. One could speculate that Saddiq  was charged after he announced not joining Pejuang in August 2020 and much convincing failed to get  him to support Muhyiddin.

Trial began yesteday. For a summary on Saddiq's first day in court yesterday, read Lim Sian See here. It is reproduced below:

Syed Saddiq was charged with dishonestly withdrawing RM1.12mil cash from PPBM's bank account for his own use.
Out of that, he used RM100k to buy ASB units in his own name.
The case is now in court but what was revealed yesterday shows that he even uses his parents to lie to the public.
Amidst the release of photos and video of him with several young girls (including one where a girl was pictured with a sleeping Syed Saddiq) in his Damansara bungalow there was also the controversy of RM250k cash that went missing from his safe.
He then told the public that the RM250k was from him and his parents and was to be used to renovate a house that he is buying.
Turns out this is untrue.
The money was for his "discretionary spending" but he then discussed in a WhatsApp group called “Value Add” to discuss with his friends on what to tell the story.
Eventually it was decided that they will tell the public that the missing money came from him and his parents (RM90k -him, RM50k from mother, and RM70k from father) and was their life savings to renovate his house.
Thus he lied about the source of funds for the RM250k and used his parents' name to lie to the public - a very despicable son indeed.
This was revealed after the police had extracted the WhatsApp messages from the handphone of Rafiq Hakim Razali, the assistant treasurer of Bersatu’s youth wing.
It is not known if he had also asked his parents to give the same lie to MACC while they were questioned. But if they did then Syed Saddiq AND his parents could also be charged for giving false testimony.
He could very well land his parents in jail just because he wanted to cover his own crimes.
Truly a despicable and selfish son.
The type who has no problems selling out his parents for his own benefit.
Syed Saddiq discussed ‘setting narrative’ for missing funds - witness
https://www.malaysiakini.com/news/625565

For Saddiq, good luck to him.