Building the nation to be robbed: Celcom should leave U Mobile cartel 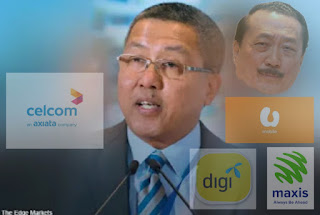 Historically, Celcom was a victim of Mahathir's under-handed manouvre to hijack the effort by its early founder, Tajudin Ramli in developing the cellular phone industry.

It was done for the benefit of Maxis. The documents does not show but the hunch indicate Mahathir has interest.

More so, presence of son Mokhzani as current Chairman makes the suspicion stronger. The current resistance to DNB-led by Vincent Tan's U Mobile could only be expected.

Picking up from Izzadin's mysterious resignation, the lines are now clearly drawn with Ralph Marshall's latest appointment at A Capital Berhad. The U Mobile cartel have gone hawking their five justifications for public support to their proclaimed war with DNB.

The puzzle remain as to why after being vicimised by Maxis for years, Celcom is willing to be in bed with Maxis and Vincent Tan-led Mahathir's telco grouping.

First and foremost, Maxis is no more the gorgeous telco stock it once was.

The large profit margin it once managed to slaughter consumer will be a thing of the past. Without 5G, foreign investors do not see Maxis as exciting and talk is there are plan to pull out. Maxis has tapered off and now aimless.

Gone is their advantage as the perceived Mahathir's telco vehicle that could be exempted from social responsibility to expand rural coverage. Industry gossip then claimed Maxis took advantage of Celcom with underhanded business practises to preempt Celcom's moves and it is said able to "steal" their IP and businesses.

Secondly, mentioned in the previous posting here that Celcom could gain more by joining DNB and transforming their business, as follows:

On the other hand, the path taken by Celcom Axiata is puzzling. MVNO is contributing less than one percent of profit and down the road it will contribute close to 50%. When the MVNO are doing well, Celcom has a clause to buy all the MVNO clients.

Celcom will come out the big winner by joining up in DNB, in which Kalimullah is himself promoting.  Yet Celcom is resisting together with Maxis, and U Mobile. Vincent Tan has directed U Mobile to bring down their 5G is coming webpage.

Third and not necessarily the final reason, DNB is not looking back, as mentioned in the previous posting:

“Basically if you don’t come in, we just have to open up the market,” Marshall said last week at his office in Kuala Lumpur. “The principle is accelerating the deployment and adoption of 5G in the national interest.”

Unless there is a political slight of hands, Government is sticking to SWN. There is sufficient hint to indicate U Mobile, Maxis, Celcom and its impending merger partner Digi.com will clearly lose out for resisting Government's DNB plan.

This is the opportunity for Celcom to regain back pole position and play a significant role in the next phase of the local telco development. It is certainly foolish for a government controlled company, Axiata to take an opposing position instead of supporting and complimenting Government's initiative.

Market speculated that Izzadin was opposed to DNB from the onset and had "his own plan" for Axiata. As one of Khazanah's pool of CEO, it is not Izzadin to be anti-establishment and adamant with his own view.

Size must have got to their head. U Mobile cartel must have underestimated DNB's ability to finance their rollout.

For the sake of the consumer and nation, government should remain firm. The local telco landscape will see a change in its players and industry will be more fair to the genuine operators and consumers.