Ledger-gate: Is the real swindler NOT charged? 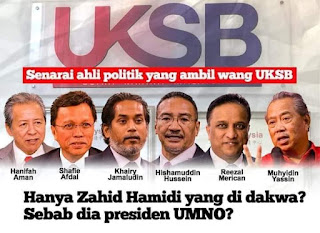 The ledger-gate case involving Zahid Hamidi and Ultra Kirana Sdn Bhd (UKSB) reminded police officer, Joeking Saiful (his FB nicname) as resembling the movie The Untouchable.
The infamous Chicago mobster Al Capone was imprisoned due to record evidence of his illegal transactions and the bookkeeper verified
The books of UKSB had long been a subject of conversation within the political circle. There were many speculations then as to why the company in which known "political Treasurer" for Khairy, Wan Quoris @ Wan Badak is a Director, implicated Zahid.
For one, it is known that the company was awarded the contract to handle the overseas visa during Hishamuddin's tenure as Home Minister. And, the rumour mill had long been talking of people linked to Hishamuddin and Khairy been receiving political contribution from Wan Badak.
So when the 15th witness, Henry Lee Viu Khium testified in court that Zahid been receiving "political contribution" of few hundred thousand Singapore dollar cash monthly and totaled over the years to be more than S$13.5 million, it is taken with a pinch of salt.
UKSB's accumulated gross profit throughout the operation amounted to slightly more than RM8 million. One can try to come out with various plausible explanation, but the claim the money was brought from Hong Kong only raised more question.
Anwar Ibrahim sensed that this was not a thoroughly investigated case but stop short of saying it was a case of political persecution and selective prosecution.
As soon as it got to the 17th and still current witness, "bookkeeper" David Tan, the identity of the recipents' nicname and amount received was disclosed. Zahid's was put under the nicname Monster, YB and other names. Khairy as Alamak, KJ and other. There is a long list and more would be disclosed at the next court date.
One particular testimony of David Tan claimed S$900,000 was withdrawn and S$300,000 was given to Zahid. What happen to the rest RM600,000? Did the MACC investigation under Sukri Abdul find out further?
Or when Latheefa Koya reopened the 2018 investigation for charge in June 2019, the same month she was appointed as MACC Chief, did she delve further into the unanswered questions?
From the testimonies of Fathil, Henry, Wan Quoris and David, all were in unison to say it is political donation. Henry and Wan Quoris handled the delivery directly to the person or to the agents/representative or left the bag at Zahid's official residence for Deputy Prime Minister.
David is merely recording the transaction and whether it was delivered to the recorded person, he could not verify. While Henry and Wan Quoris could not remember the details, but they conveniently could  remember Zahid.
A long list of names of politicians were disclosed including a former KSU and was then heading Immigration Department, Alias Ahmad to have received money.
The name resembled the first witness in Rosmah Mansor's solar case. Interesting ....
Since records managed to be submitted and David verified as the maker, it is considered as evidence under the Criminal Procedure Code.
Despite botching his denial with unnecessary and illogical reason, Muhyiddin has issued a statement of denial.
As of yesterday, Anifah Aman denied receiving RM500,000 monthly and strongly refute having ever met David Tan.
It was mentioned in court by David that the RM500,000 was "for China". This is not to deny for Anifah but logically it is not believable for him to do so.
Anifah is still being respected and sought after by diplomats and foreign ambassadors including from China on international relation matters. If he is corrupt, it is unlikely he would get such respect.
If he had received regularly RM500,000, he would not have won Kimanis by a nip during GE14 and later judged as invalid.
It is speculative and more shoukd have been investigated on what is the money from Hong Kong mentioned by 14th witness? What does "for China" means?
Since an Immigration boss is on payroll too, could it be suapected as bribes collected abroad for China travelers to get Visa and subsequently stay in Malaysia perpetually?
Is it possible this was the real crime committed?
Another sinister suspicion and somewhat similar senario to 1MDB/SRC, could it be possible the witnesses mentioned were saved from prosecution on the condition they follow the script to implicate Zahid since the recorded nicnames are subjective?
For one the amount Zahid is accused of receiving makes no sense. Muhyiddin received RM1.3 million as the Home Minister in which David justified as "government of the day".
Why then UKSB could afford to pay Zahid up to S$13.5 million for doing similar to Muhyiddin to continue the contract Hishamuddin seek Zahid not to terminate?
Another comparison, Wan Quoris allegedly gave his political "chief", Khairy merely RM3.7 million, which is far less than Zahid. Does Zahid amount make sense?
The continuation of the court case would draw more public attention.
In the meanwhile, the "market" await Hishamuddin, Khairy, Reezal and others with known linked to Wan Quoris to make their denial.
at 6/21/2022 02:11:00 PM