U turns making Friday's protest a Walk of Contradiction 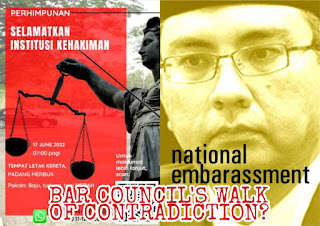 Bar Council will be holding a Walk of Justice this Friday, June 17.  That was the decision of its recently held EGM.

It was intended to protest MACC investigation of Justice Nazlan Ghazali under the pretext of interference on judiciary. However, the outcome of the EGM did not turned out the way Ambiga claimed it to be.

Former Bar Committee member, Lukman Sheriff revealed there was no resolution passed to that effect. Resolution on the non-constitutionality of the investigation was rejected. There was allegation made against MACC for revealing name of judges but it did not occur. The Bar was desperately grasping for an issue to fault and did a volte-face (U-turn).

It explained for Dato Mah Weng Kwai's own volte-face two days before MACC announced completed investigation. He called for investigation on Nazlan be made known despite being vocal to protest the  investigation of Nazlan and call on lawyers to support the protest.

Mah is not the only one. Current President Karen Cheah lashed out at critics for not demanding Nazlan to recuse, but yet volte-face on the cause for the protest. 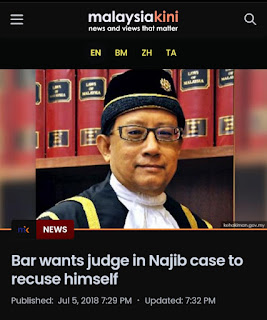 It was Bar who demanded of Justice Sofian Abdul Razak to recuse himself for being a brother to an UMNO state assemblyman in Pahang. But Bar was bias for being silence on Nazlan. There have been four conflicted judges voluntarily recusing themselves on SRC related cases. 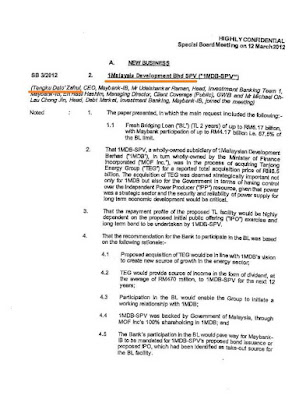 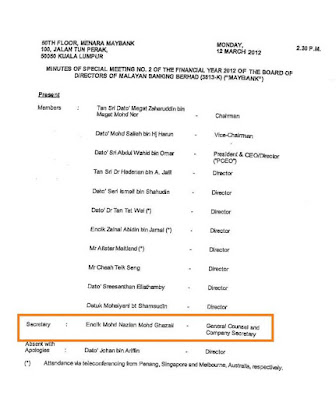 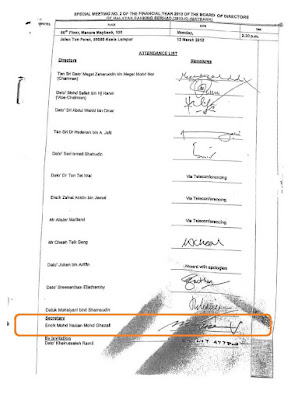 The documents above proved that Nazlan is clearly conflicted.

And the one criticising the Bar for their inconsistency was no less than former Minister in charge of law and currently Chairman of DAP Kelantan, Dato Zaid Ibrahim. 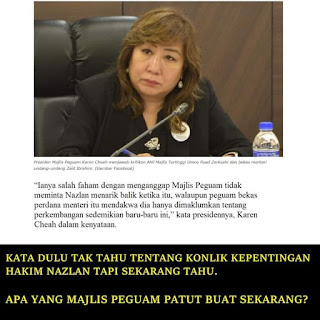 Despite not acknowledging the contradiction in her statement, Karen did her own volte-face. She was never a criminal lawyer and was late to realise Nazlan's clear cut conflict.

From protesting against judicial interference, she covered her embarassment by changing the cause of the walk to uphold independence of the Judiciary and the right of persons to a fair trial.

Was Najib's right for a fair trial respected, if the rumoured claim that the case was designed from the first step of preparing the Investigation Paper by MACC for AG Chamber till the writing of Nazlan's judgement?

Political logic say that he never had a fair trial because Bar was openly pro-Pakatan Harapan. The walk should then be to champion Najib's cause.

During PH administration led by Mahathir, the whole system of law and order were rigged by placing politician, openly political persons to positions of IGP, AG, MACC Chief Commissioner, and Chief Justice.

The lawyers leading the prosecution team are hired externally, PH friendly lawyers and not DPP from AG Chambers. Unconflicted presiding judge were pressured to recuse by Bar and replaced with a conflicted Nazlan.

It was widely speculated in social media that judges that convicted and to convict the persecuted politicains were and will be rewarded, respectively with promotion to the higher court.

Such reckless conspiring has not backfired heavily with Nazlan is seen as clear cut conflicted. Najib and Shafee's press conference 6 days ago to nullify the SRC judgement based on Najib being denied a fair trial:

Nazlan's conflict of interest was blatant and in his judgement, he committed an offense to claim as true facts known to be false. He claimed SRC was Najib's idea in which he is aware Maybank proposed the establishment of SRC to 1MDB. 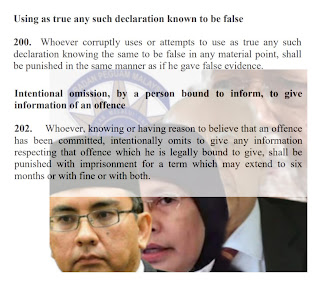 UMNO Youth has called for a tribunal.
What is the chances for that to happen when the police is still dragging their feet after a year and half of investigating Zeti. Perhaps it is Attorney General Idrus Harun that has not acted on submitted IP as he did on IP on Nazlan and three MARA Corp officers.
A month ago, Chief Justice Tengku Maimun lambasted critics of Nazlan and displayed her biasness to defend him before IP on Nazlan was submitted. 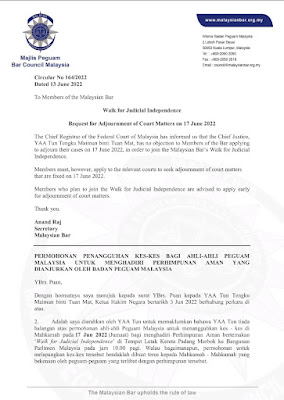 Yesterday Tengku Maimun consented for court cases to be adjourned Friday for lawyers to attend and defend her. What fair trial is Najib getting when presiding judge herself is bias?
at 6/15/2022 02:37:00 PM