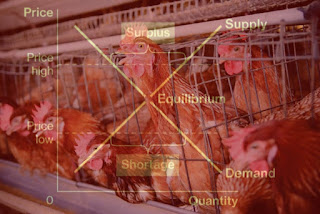 The way forward is for market player and government to collaborate on a price control mechanism and at the same time, allow industry to adjust itself. The chicken price could be floated with commitment from industry to off load their chicken stockpile to cap price at below RM10.50 per kilo. This way subsidy could be minimised.

The technical committee to address food security issues met on Tuesday to discuss the new chicken price ceiling for July to September.

The recommendation will be brought forward to the Cabinet and an announcement is due after their weekly meeting Wednesday.

After last week’s flipped announcement by Alexander Nanta to float the price of chicken, the Cabinet flopped back three days later with Prime Minister Datuk Seri Ismail Sabri Yaakob himself announcing the cancellation. All eyes await the Cabinet’s decision tomorrow.


There is supposed to be sufficient lesson learned that tampering with market mechanism and ignoring market reality is not sustainable.

Cabinet’s decision to ignore the significant rise in feed cost and insisted on the politically populist decision to suppress the official maximum price from RM9.10 per kilo has backfired. Feed contributed to 70 per cent of cost and 70-80 per cent of the cost is from imported corn and soy beans.

Instead of the desired effect of making consumer prices low, it created chicken shortage and retail prices at the wet market reached double digit level.

This goes back to basic economics in which prices of good in the market is the equilibrium level whereby supply could meet the expected demand. If chicken price goes up beyond the general affordability, consumers will naturally hold back their purchases and prices will adjust downward.

Conversely, forcing prices below the equilibrium will result in the quantity suppliers could make available to fall below quantity demanded by consumers, thus resulting in shortage.

High prices will encourage supplier to increase production and stabilise prices, claimed by Haji Jifri Ahmad, President of Ayam Bismi, among the few successful Bumiputera chicken farm. But when prices are suppressed, no farm could mitigate the problem arising from drastic rise in the cost of feed due to post-pandemic disruption in global supply chain and worsened by the Russia-Ukraine war.

It happened within the chicken growing cycle and caused irreparable losses to chicken farmers, especially to the smaller and contract farms. With feed prices still uncertain and still rising, thousands of smaller farms had to close.

The government’s decision in January to increase import only worsened the situation. It is ignoring the woe of local chicken farmers with a non-workable stop gap measure. Malaysian chicken is already one, if not the cheapest in the region. There is limited sources of chicken available to supply within the price expectation and quality Malaysian consumers are accustomed to.

The recent government’s decision to curb export was no help. While it appeared as though it could maintain local production of chicken for local consumption, the commercial reality is different. The larger margin from export help the large chicken integrator buffer the thin profit margin for local market and maintain the contract farmers.

A quick scan through the published account of major listed chicken companies shows gross profit margin at less than five per cent. That is not the profitability level one would expect from companies being perceived as cartels.

As such, the new price ceiling to be set by cabinet must be a win-win-win situation for consumers, farmers and government.

The new price ceiling cannot be lower than the one set but not attainable, at RM8.90 per kilo for June. It will be higher than RM9 but should not touch RM11. When priced too high and beyond affordability, consumers will hold back their purchases and similar phenomenon faced by durian farmers will occur.

The government may have reservation to float the price of chicken given the comparatively higher regional prices will add pressure to the local market.

In a recent memorandum to MAFI Minister, the Federation of Livestock Farmers Association of Malaysia (FLFAM) claimed that the ex-farm production cost as at June 1 was RM7.44 per kilo. After profit margin for farmers, wholesalers and retailers, taking account for loss in weight after cleaning, and other costs, government subsidy is needed to maintain price below RM10 per kilo.

As it is, Finance Minister Datuk Seri Tengku Zafrul Aziz has sounded alarm bell that subsidy expenditure has reached the highest ever at above RM70 billion vis-a-vis national budget of around RM300 billon. [The Vibe here reported RM80 billion]. Despite the high oil palm and oil and gas prices, the country could not capitalise and raise its revenue.

The way forward is for market player and government to collaborate on a price control mechanism and at the same time, allow industry to adjust itself. The chicken price could be floated with commitment from industry to off load their chicken stockpile to cap price at below RM10.50 per kilo.

This way subsidy could be minimised.

Other announced effort is still iffy. Targeted cash handout of additional RM100 to B40 is realistically not sufficient. And, the idea of growing local corn for chicken feed will not solve the immediate problem. Furthermore, it is not cost efficient as proven by the higher chicken prices in Indonesia and Thailand.

Economic reality is about ringgit and sen. The ability of the market to react to any changes in variable cannot be underscored. Prices in the market adjusted immediately to the announced pricing mechanism ahead of the July 1 commencement. Pulling back the decision will not change retail prices.

When decision hit consumers’ pocket, justifying flip flop as a display of sensitivity to public outcry and expecting it to be reciprocated with sense of gratitude is not the answer. Rational and convincing measures is needed to appease the public, not unsustainable populist moves anymore.

After the Serba Dinamik and minimum wage debacle, the government credibility to handle economic crisis is seriously on the line. Unlike the two said issues, food issue affect all Malaysians. And, the chicken problem have been lingering since late last year.
at 6/29/2022 10:21:00 AM