Mukhriz call for political ceasefire and unite for the Palestinian cause 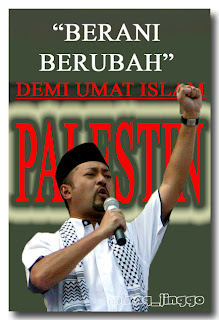 MARANG, Jan 10 (Bernama) -- Aman Malaysia has called for a "ceasefire" in the Kuala Terengganu parliamentary by-election on Thursday to raise awareness on Israeli atrocities in Gaza.

Its coordinator, Datuk Mukhriz Mahathir said the political parties involved should bury their hatchet and join forces in a campaign to condemn the Israeli invasion of Gaza.

"Let us stop campaigning for 24 hours to show our deep sympathy to the besieged Palestinians. Maybe we should hold hajat and tahlil prayers on Thursday night.

"I hope my idea will be well received by all," he told reporters after launching a fund for the Palestinians at the Emping Square, Kampung Undang, Bukit Payung here today.

Mukhriz called on the United Nations to set up a war tribunal to try Israeli leaders for war crimes like the one which had indicted Yugoslavian leaders for ethnic cleansing in the Balkan War.

Aman Malaysia is ready to send 10 doctors to Gaza, he said, adding that, the Rafah border should be opened for humanitarian aid to pass through to reach the Palestinians.

He lashed out at certain quarters for ridiculing a proposal from the people to boycott the American and Israeli products.

"We hope the United Nations will have the political will to force Israel to halt the Gaza offensive and to the United States from exercising its veto power," he said.
at 1/11/2009 08:56:00 AM