For more than 5 years, Abdullah abandon the two Malaysians imprisoned in Gitmo 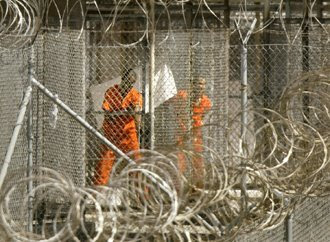 On his return from Middle East trip that was seen by many as escaping the pressure of the Kuala Terengganu by-election loss and planning an insidious political move, Prime Minister Dato Seri Abdullah Ahmad Badawi finally acknowledged the existence of the two Malaysian imprisoned in Guantanamo Bay (Gitmo) since 2006 and under CIA detention since 2003.

The two Malaysian had been on the radar of Malaysian blogosphere since September 2006. No officials words have come out from Wisma Putra or Putrajaya since then. Abdullah was reprted to have met former President George W Bush in New York and Washington but reliable sources informed that he never raised their plight in the meetings.

The reason was Abdullah had long been under threat from the American for his son, Kamaluddin's involvement in the Scomi nuclear centrifuge scandal in 2004. His administration is held under ransom and had been at the whims and fancy of the Western powers and their regional stooge. He may have abandoned the plight of these two Malaysians out of his fear for his family.

A leader who abandoned his people has no business to continue in office and do not deserve any grain of respect. And yet, rumours are getting louder that he is trying a manouveour to stay in power.

He said Malaysia would like to know what would happen to its two nationals who were among about 250 inmates of Guantanamo, many of whom have been held for years without trial.

"If possible, we'd like to bring both of them home so that they could continue to serve their sentences in Malaysia," he told Malaysian journalists covering his visit to the United Arab Emirates here yesterday.

Abdullah lauded the decision by the new American president to close down the facility in Guantanamo, Cuba, within a year.

"President Obama's decision must have gone down well with many countries and Malaysia too is happy because he has fulfilled his promise," he said.

Besides closing the Guantanamo prison, Obama also ordered a halt to harsh interrogation of terrorism suspects as he sought to restore the US image abroad.

AFP reported the two Malaysians as Mohammed Nazir Lep and Mohammad Farik Amin. Both are described by the US authorities as members of Jemaah Islamiyah (JI). The report below:

"We'd like to bring both of them home so that they could continue to serve their sentences in Malaysia," Abdullah told state news agency Bernama Saturday.

"President Obama's decision must have gone down well with many countries and Malaysia too is happy because he has fulfilled his promise," he added.

Mohammed Nazir Lep and Mohammad Farik Amin are described by US authorities as members of regional terror network Jemaah Islamiyah (JI), the group behind a series of attacks in Southeast Asia including the 2002 bombings in Bali.

Both of the Malaysians were arrested in the joint Thai-US raid in Ayutthaya that also captured their boss Hambali in August, 2003.

Hambali himself, described as the operations officer for Jemaah Islamiyah, is an Indonesian and also in detention at Guantanamo. Indonesian officials have requested access to him for questioning several times but never have said they will accept him back in Indonesia.

The two aides were held for interrogation for several years, and then transferred to Guantanamo with several other "high value detainees" in September, 2006.

The two Malaysians also were allegedly deeply involved in an al-Qaeda plot to replicate the 9/11 attacks on the US west coast. That plot failed when the only pilot in the cell opted out of the operation.

Mohammed Nazir, better known as Lillie, is said to have transferred Al-Qaeda funds for use in the 2003 bombing of the J.W. Marriott hotel in Jakarta which killed 12 people.

Obama, who took office this week, ordered the closure of the prison at the US naval base in Cuba, with its remaining 250 detainees to be dealt with constitutionally.

Of the remaining Guantanamo inmates, only about 20 have been charged, including five men accused of helping organise the September 11 attacks of 2001. - AFP

The two Malaysian had been on the radar of Malaysian blogosphere as far back since Rocky Bru's September 13th, 2006 posting that referred to Bernama Salmy Hashim's report here.

In her report on the same date, both the Malaysian names were already reported. The two Malaysians had just been transfered then from an unknown CIA detention centre. They were beleived to be captured in 2003 together with Al Qaeda's Hambali for allegedly planning a 'second wave' on Los Angelas after the 9-11 on New York in 2001.

The Gitmo detention camp have been known in existence since 2001. It was established primarily for detaining suspected Islamist terrorist.

On September 19th, 2006, Abdullah met President George W Bush in New York but there was no news of him raising the issue of the two Malaysians detained. Bernama merely reported the meeting initiated by Bush with the then OIC Chairman to discuss matters of "global importance" and "how to keep the peace".

In other word, he did not raised the matter of the two Malaysians. He did nothing but kept it under lid from the Malaysian public.

Abdullah did not express any displeasure or disagreement when a Torture Bill was passed in Congress on Sepetember 29th, 2006 to legalise torture and it's indefinate detention. Nor did Abdullah raised any complain or ruckus when it was reported that the US were doing secret trials of detainees behind closed door without legal representation and away from media in places.

Why is Abdullah pretending to show concern and compassion to seek for further information on them and seeking to bring them back, when for more than five years, he never bothered?

This blogger hold a strong suspicion that it all links together with the 2004 nuclear centrifuge scandal, in a recent development few weeks ago, Scomi CEO, Shah Hakam, was sanctioned by the US. Shah Hakam, son Kamaluddin and former ISA detainee, BSA Tahir are the original shareholders of Kaspadu, which in turn controlled Scomi. Now only Kamaluddin is still scot free. For now, that is.

Abdullah is believed to be leading the country under ransom. He had been making series of decisions to kow-tow to Western powers and also commercial and security decisions in favour their stooge, particularly Singapore.

This Scomi incident have built an ingrained perception on Abdullah as a selfish leader who has no national agenda, then for himself, his family, and cronies at the expense of national interest and security. The plight of the two Malaysian Gitmo detainees may have been abandoned and their fate left to chance.

A leader who abandon his people have no right to stay on and earn any respect. Thus, what can be expected from our leader who is a puppet of the West after the recent development on Scomi? Is it a threat to go easy on Anwar when his trial begin on February 5th, 2009? Or is it a US response to strong language on Israel?

Or maybe, the growing rumour that Abdullah will stay on after the UMNO March election is linked to this development? Uncle Sam wants him to stay on.
at 1/25/2009 05:40:00 PM

Yup. Can't agree with you more bro.He's a great pretender alright.All lip service from the start. Less corruption, better security for all Malaysians my foot! The less he speaks the better. Am I not sick having this cartoon character as the Prime Minister. His successor won't be any better! Offering that PKR guy to bring 2 Perak ADUNs to cross over at a RM50 million tag says it all. Wowee, that's bigger that a real jackpot win man...What? That RM50M is from his own bloody pocket you say? No fishing way!