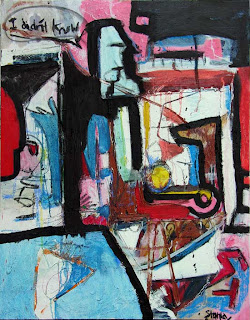 UMNO Perak is faced with a crisis. Last heard, Tajul Rosli has offered his resignation.

But we have yet to hear any statement from Pak Lah. In fact, we have yet to hear his comments on few major recent issues - the outcome of the Kuala Terengganu by-election, Kugan's death that could be a renewed Hindraf uprising, and Tengku Rithauddin's strange recomendation yesterday to abolish the various UMNO wings.

Tonight there will an UMNO MKT meeting. We shall await UMNO's official reaction, and immediate action on the development in Perak.

Since politics is not as straight forward as whats written in the press and cliche statements in official blogs and portals, be it from the BN or PR side, I like to highlight the views of Bigdog, rumour from the propaganda machine, KPMU, RMF7, and Tengku Razaleigh.

It is not so much to pursue the truth or real story, but understanding the in-denial syndrome pervading UMNO of today.

Blogger Bigdog was reliably informed that Nasaruddin was promised by Anwar the Perak MB to replace Nizar.

With Nizar strongly seen to have lost the confidence of the Istana, Anwar is eyeing the MB post for PKR. PKR missed their chance because the Malay PKR Assemblymen lack the "academically qualification". Thus, Anwar had no other choice than to go to the "transfer market".

In the meanwhile, UMNO's propaganda machine have gone on it's typical character assasination mode. Nasaruddin was identified as an "Anwar's man" inside UMNO. It is claimed he has financial problem meeting up to the demanding second wife after relinquishing his position as Felcra Chairman.

Their reaction to call upon Nasaruddin to relinquish his State Assemblymen seat and recontest the post under the PKR flag is childish and ill informed. At this juncture, such reaction is out dated. UMNO should be looking at this development with a more serious and mature disposition.

Another character assisination theory making it's round is Nasaruddin reacted as a sore loser. His attempt to unseat the incumbent Datuk Mohd Zaim Abu Hassan for Ketua Bahagian of Parit failed.

He is thus labelled in UMNO's political lingo by portal KPMU, Khairy's cyber political propaganda machine as "kecewa". This is a typical cliche term used by UMNO in countering critical views from within the party. Being labelled as "kecewa" in UMNO is bad. Any opinions and views could be easily dismissed. It seem as though losers have no right to any opinion and views and thus their views and opinions should not be heard. But such lingo does not apply not to the more important voters.

Interestingly, the portal claimed things are fine in UMNO Perak. An indication of a repeating trend of self in-denial.

Nasaruddin should kow-tow or akur. It is said Tajol Rosli had a hand in the fight and exerted his influence in favour of Zaim. This is the untold reason for his offer to resign as Ketua Perhubungan Negeri. Nasaruddin departure could likely be to "teach" UMNO Perak a lesson.

From the information revealed by blogger RMF7, there could be some truth. By comparing Nasaruddin's and Zaim's performance in the recent 2008 GE, Nasaruddin showed a comparatively marked improvement in number of majority in such challenging condition.

As usually the situation in UMNO, what the voters want is not necessarily what UMNO members want. Just like in Kuala Terengganu by-election, there seemed to be "other" considerations to take into account.

Tengku Razaleigh, who has recently got the blogging "kick", saw the departure should be viewed with sincerity and honesty on the part of UMNO. He described UMNO predicament in a rising water situation with the level already waist high since March last year.

Ku Li acknowledged knowing the man and described him as a friend. He viewed Nasaruddin as "an honest and capable man with deep roots in Umno".

Reiterating his call for the party to face to its problems by acccepting reality, he highlighted Nasaruddin's reasons of "the direction of the public’s support since the 12th General Election in March 2008″ and “the condition (of) UMNO and its leadership.”

For UMNO sake, they better hope Nasaruddin keep to his UMNO root and is merely teaching UMNO a lesson. At least, there is a glimmer of hope for the Malay cause.
at 1/29/2009 11:30:00 AM

Look at the silence from Pakatan toward Abdullah Badawi continous sleep on these issues.


That is why, Hadi want Badawi be continue as PM lah, see it?