IJN: Is there really a threat of takeover? 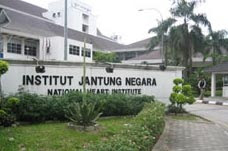 Bigdogdotcom leaked the story of a possible privatisation of Instituit Jantung Negara (IJN) last Tuesday October 20th, 2009. His argument was based on a proposal believe to undertake a "Wide Unbundling of Asset" (WAU) similar to the excercise undertaken by Malaysian Airlines System. WAU was the term used by the Binafikir team to justify millions to be paid to them.

It is actually a financing scheme one can find in any undergraduate corporate finance textbook called sell and leaseback. It is an option to help a company realise some cash in a liquidity crunch situation. Although quite common and almost a textbook case, it is not known to the man on the street.

The suspicion of another takeover has been lingering since the last failed attempt by Sime Darby. Many quarters had interpreted the then Deputy Prime Minister, Dato Seri Najib's statement as no takeover for now. The question in the back of most in the know ever since is how the takeover will happen? And who?

In the meanwhile, I am still trying to understand if there is such a takeover plan now in the first palce.

Big Dog's notion of fragmentation and decentralisation builds up further from a Ernst & Young study commssioned this year to restructure the Company.

Although the structure existed in the EW report, news reports yesterday denying the privatisation plan issued by Tan Sri Nor Mohamad Yakcop's office and IJN Holdings Berhad mentioned that the structure had been in placed since 2005. The denial reports below:

IJN Holdings Has No Plan To Privatise IJN

KUALA LUMPUR — IJN Holdings Sdn Bhd has no intention to privatise the Institut Jantung Negara (IJN) or any section of the nation’s premier heart centre.

It denied that any submission to do so has been sent to the Economic Planning Unit (EPU) in the Prime Minister’s Department.

IJN Holdings, in a statement today, said the IJN Group remains committed to deliver the best cardiac care for the people n line with its corporatisation objectives.

The IJN Group consists of IJN Holdings as the holding company and has four subsidiaries. They are IJN Sdn Bhd, IJN Capital, IJN College and IJN International.

IJN Holdings, wholly-owned by MOF Inc, was incorporated in March 2005 as part of a corporate restructuring exercise approved by its board and the government to facilitate fund-raising for redevelopment of the National Heart Centre’s facilities and its expansion into education and training.

It said the exercise had also consolidated IJN’s key activities to create better focus in its areas of expertise.

“The 2005 restructuring was to support the IJN in achieving its vision of becoming a global centre of excellence in cardiovascular and acrdiothoraic care and ensuring the heart centre as an institution remain sustainable in facing future challenges,” it added.

As said above, the IJN Holding structure was established with consensual agreement involving all the shareholders and stakeholders, and with collective responsibility agreement at the Board level in which it is represented by the shareholders, authorities and both medical and adminsitrative side of the organisation.

With the denials by IJN Holdings and Tan Sri Nor Yakcop, my question will be similar to Bigdogdotcom - If there are no monkeys, how come the tree is shaking?

Bigdogdotcom question is why was the EY study made? That should not be difficult to figure out.

A Voice is more curious as to how this sudden talk of another takeover come about? With Najib going around with his 1Malaysia: Rakyat didahulukan, Pencapaian diutamakan, the privatisation or takeover of IJN will run counter to what he is preaching.

Najib would not do such a blunder. Pak Lah could but not Najib.

Could it be a case of a tuff war between management and the medical doctors?

Bigdogdotcom wrote quite a bit about doctors and their contributions. Naturally most doctors would prefer that one of them lead IJN instead of a non doctor. It is true, but I do not think there is a tuft war.

I'll tell you why later in my next posting because I've got to run for an appointment with my doctor.

Of more important than trying to figure out who did it, which is of no consequence since there is no privatisation happening, let us ponder to find a way so that IJN would permanently remain as an integral part of the public healthcare system, specifically on heart care.

The motto for IJN should remain as 1IJN: Pesakit diutamakan, Pemulihan didahulukan. Both management and medical believe in the same thing, so no tuft war.

To answer the title, is there really a threat of a takeover, my answer is also no.

The last thing each side would want is to be associated with a corporate shark. They will gobble them back.

No other corporation would dare do a Sime Darby as it will invite a public outcry. I strongly believe that Government will stay true to the original purposes - stated and unstated - in establishing IJN.

CEO of IRDA, Harun Johari, has tendered his resignation on wednesday (21 Oct) after taking over that position from Dato Ikmal Hijjaz since 1 March 2009. Harun’s strong lieutenants ex-SHELL that joined IRDA in March/April 09, Jameson (head of strategic com) and Ahmad Suhaili (Head of Integrated Planning) have also submitted their resignations. There’s no press release made by IRDA with regards to the “sudden” resignations of its senior management. Can someone please check out what is brewing down south?

May be, Khairy will be the CEO to replace Harun. KJ is known to be closed with Singaporean and put him at IRDA just like an icing on cake.