After the weekend crowd has left, the PAS ceramah stationed along the main raod between PD town and Telok Kemang is not attracting as much crowd as before. Haji Hadi was talking to an audience of 15 yesterday evening.

PAS have taken their campaign on third gear. The ceramah remains and the whole ceramah team is still in Port Dickson. But the emphasis is slightly different.

For instance, there will be four ceramah tonight to held concurrently but it is the house-to-house campaign that is their new tool. The ceramah is for entertainment and fund rasing, and also to hype up, but the serious vote getting is through personal contacts. 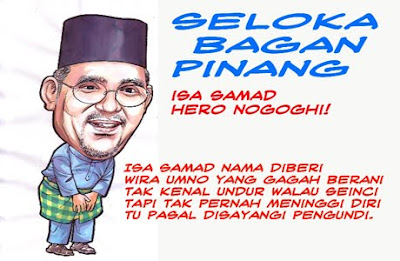 Despite the setback from complacency in the party machinery and PAS's shock and awe, Team Isa is pushing the campaign on the ground, where it is more relevant, through direct contact to his voters. Is Kuala Lumpur too overconfidence?

When PAS was covertly doing house to house in Ramadhan, Isa has been touching base with key personality and local leaders.

Isa's campaign only did big event for his announcement event. Team Isa's ceramah session is focused on local voters and in smaller sessions as oppose to PAS's dramatic and fiery ceramahs which is attended by mostly outsiders.

Isa's affable and witty personality always win hearts but this campaign is not just about winning to Isa but how it is won. The local voters figure must decisively show the local votes is for him. He need to improve with the Chinese and Indian voters. Isa need to retake those voters disenchanted with UMNO in the 2004 General Election.

UMNO grassroot and its usual voters are willing to accept Isa but how will it be for the rising number of young voters and encroached base among the military personnels.

The onslaught on Isa on money politics has yet to really dent him. Nit picking of issues on his 22 years as Menteri Besar is not convincing. People of Bagan Pinang has come to accept Isa was a victim of circumstances in UMNO.

PAS is left to play on national issues and that is the theme at the ceramah stations of PAS. Will the national issues affect voters in Bagan Pinang? Not likely as one property consualtant and veteran in Team Isa described.

If they can get their act in order (read Bujai here), UMNO should be pounding back on the national issues and picking on the problems in all Pakatan governed states.

The huge Command Centre is now ready an running. However, all the machineries are still lost in endless meeting and coordinating work. What they should be doing is to get on the ground and start working the way PAS is agrresively doing. UMNO machinery seem to repeat the same habit. Clear sign of complacency.

The pinnacle of the campaign should be in the few days near the end. Anwar is expected to arrive three days before polls. But if the crowd is like what Hadi had to contend with last night, he might not come to be embarass. If he should come, he will need reinforcement in numbers from outside.

If both BN and PAS failed to attract crowd, then it can be anything. Overconfident voters will not cast their votes thinking that their fav could easily win, which sometimes not the case.

Kuala Lumpur should've make a thorough feedback before it's too late.

I've heard ridicolous things coming out of Bagan Pinang for these 2-3 days. Its okay if stupid comments come from mindless PAS or racial DAP or assmen PKR, but i believe we should refrain ourselves and behave.

Please tell our comrades there not to OVERKILL. this is a serious reminder i am telling you. if we gone overboard, voters will give them undi kesian. if that happens, we will be 9-1 behind.

so please, remind them not to over kill.