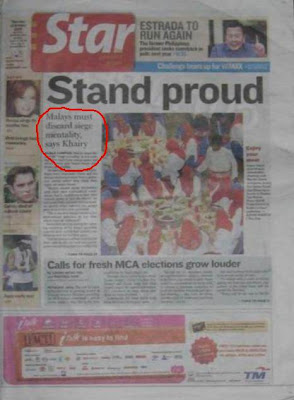 The Malaysian Insider was the first to pick on Khairy's call for Malays to end seige mentality. They continued to take on an issue that was shunned by the Malay press. Only the liberal and non Malay press picked it up. See The Star that gave it a front page on Wednesday.

Some Malay press member seemed to refuse to be comprehensive in their claimed objective analysis of Khairy's speech. Tak mahu gaduh-gaduh lagi. Even if you like this fella, you have to be cruel to be kind.

Khairy must be sorely frustrated with the lack of publicity because his stunt did not get the desired result.

One state exco and member of a party wing was asked. The response was simple. He is already ignored. He knows he is irrelevent. He is on path to the inevitable demise.

That will leave this issue hanging and left unanswered.

Before we further on, the blog Dari Kacamata Melayu dissected the grave mistake by Khairy. Rather emotional but with justification, do read Adakah Khairy faham apa maksud 'seige mentality'? I am beginning to believe that Khairy entered a geometry set instead of entering an esteemed University.

Khairy defended his stance amidst the immediate critical response by this blog here. Well, he can't do anything else but defend it.

The Malaysian Insider reported below and interspersed with my comment in blue:

Khairy defends his call for Malays to end siege mentality

KUALA LUMPUR, Oct 16 — Umno Youth chief Khairy Jamaluddin today defended his policy speech calling on the Malays to end their siege mentality and to abandon the concept of “Malay dominance” in favour of “Malay leadership” after it drew some flak from right-wing elements in the party.

“Well, people are free to say what they want to say about it. I don't mind if they criticise because it is a free country they can say whatever they want,” he said.

Thank you for your openness, YB. I will continue to be on your back, for your own good (if you know what to do) and maybe for the worse.

For your comfort, I do not agree with Ketuanan Melayu but am more in favour with Prof Malek Munip's Kesinambungan Warisan Sejarah Melayu. Continuity is an important essence in progress. Lost are civilisation without any oppurtunity to link to their root.

Most Malay-language newspapers, particularly those aligned with Umno, failed to highlight his call for the Malays to end their siege mentality, in reporting his speech at the opening of Umno's Youth assembly.

Some Umno blogs have also attacked him, by suggesting his speech appeared to be more in line with opposition leader Datuk Seri Anwar Ibrahim's rhetoric than that of Umno.

One blog — anotherbrickinwall.blogspot.com — accused Khairy of siding with the opposition.

“Now that Khairy has made open his stand on Malays and Bumiputera special rights, does that mean he is on the side of opposition critics who keep labelling Umno and nationalists as racist every time the mere mention of constitutional rights of the Malays are defended?” the writer of the blog asked in a posting.

Ah ... thanks Adib for making more famous than I already am. Perasan ...hehehe

But Khairy said today he would stick to what he said in his first speech since being elected the Umno Youth chief in March.

“I stand by what I said. I have nothing to be ashamed about because that is what I believe in,” Khairy told The Malaysian Insider. 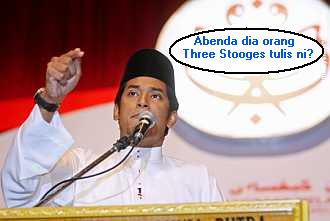 But why was your immediate reaction upon being blast privately is to lay blame on to three others as responsible for writing that speech?

My friend and researcher alerted me that you tweetered two months ago that you are in the midst of preparing this speech.

In the first place, why suddenly others determine what you should say in your speech? One is said to be your svengali; another would be one with like mind as yours which I can safely guess; and wonder whose the third idiot in this three stooges.

But you read it withpout much question! Supporter pun pening.

Better fire your three stooges la, KJ. Why do you have the habit of hiring super-idiots, be it your cybertrooper or advisers? I sometime wonder why you keep making mistakes after mistakes. Must be intentional or by design.

His message for the Youth wing to be consistent with the central leadership's message to avoid being accused “as a party in disarray, hypocrites, without a consistent ideology for the people and electorate,” has also not been well accepted by some in Umno.

“Umno Youth must be the voice of the people, the people's unhappiness must be made known to the leadership,” said Datuk Seri Dr Khir Toyo, who lost the Youth chief contest last March to Khairy.

“The Youth must understand the Prime Minister's message that the era of government knows best is over,” said Khir

He cited the lobbying efforts for the Bagan Pinang by-election candidate to justify his accusation that the movement had failed to speak for the grassroots.

“In Bagan Pinang many questions were raised regarding Tan Sri Isa Samad's past, when he was actually the grassroots' choice, Umno Youth should have fought for his candidacy,” said Khir, who is Sungai Besar Umno division chief.

“If they just toe the line, they will be irrelevant,” he added.

But Kelantan delegate Datuk Alwi Che Ahmad defended Khairy's statement, saying that it does not mean he was seeking to end the wing's role as a pressure group.

“It is a very refreshing speech, we have not heard such a speech from the Youth chief for a very long time,” Alwi told The Malaysian Insider.

“The Youth cannot just know how to pressure the leadership, they must work hand in hand with the central leaders,” he added.

Kah kah kah ... Si gedebe Alwi Ketereh. Pak Lah's last political secretary. Mintak tolong baba juga kah? Is this the best Khairy can get someone to defend him? Did he actually said the word "refreshing"?

Alas, it is not an understatement for him to say, "... we have not heard such a speech from the Youth chief for a very long time."

In the meanwhile, The Malaysian Insider reported Dr M dismissal of Khairy's notion below:

PETALING JAYA, Oct 17 — Tun Dr Mahathir Mohamad yesterday brushed aside Khairy Jamaluddin’s call for Malays to end their siege mentality, pointing out that perhaps “some of us are already successful.”

But the former prime minister said there were still many Malays who found it hard to make a living.

Dr Mahathir said last night he believed Malays still had a siege mentality because of their relative poverty.

“Maybe the average Malay feels that he is under siege, so to speak because he does not earn enough,” said Dr Mahathir.

“Well, maybe some of us feel that we are already successful, so we don’t need to be under ‘siege’,” said Dr Mahathir.

Read on in my blog.

ask him to learn the 'lagu umno' first than only he can talk about 'mentaliti yang terkepung'..

I dont think ther's is anything wrong with what Kj was saying. He said the new Malay Dilemma was that Malay's cannot be afraid to live without the special rights simply many have lived through the years successfully competing. There is nothing sinister abt the other races in the country wanting the same level playing field but at the same time know that they are 'protection' for Malay/bumis whom really need it.

You cant deny, but UMNO has a way of communicating the wrong messages to the ground by creating an enemy (other races) and unite on this reason. Personally, I think that sort of politics of fear is outdated.

The issue is not about what you said. In fact, I have no problem with that view.

KJ has made a grave error in his assumption as the basis of his argument. Thus, all his arguments and calls are wrong, unsubstatiated and baseless.

Frankly, a young man like him with a tattered background has no advise calling or advising the Malays anything.

He has achieve nothing in life worthy of mentioning. Short career in hodgepodge of places.

Only those supporters blinkered by Agong's notes trust and beleive in him.

Even UMNO do not trust him to campaign in by elections.

This major liability of UMNO is upsetting it's balance sheet.

Ha ha funny....., the major liability that was affecting the balance sheet was bailed out with Petronas money and now is the proud owner of an international beer factory. Another one is happily living the high life in his 24 million dollar mansion, btw, did you managed to get a peek inside?

I heard somewhere his speech was written by the three stooges

Nice post, kind of drawn out though. Really good subject matter though.