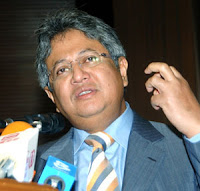 Allow me first to take off my UMNO cap as a feeble symbolic attempt to maintain some level of non-partisan objectivity.

The event surrounding Dato' Zaid Ibrahim six month leave is anticipated to lead to him leaving PKR. This is not the first time for Zaid in any of his endeavours.

Other than his personal perseverance through many years of building the legal firm that bears his name, Zaid seemed to have a recurring habit of involving himself in organisations or attaining posts for a short while before quiting due to irreconcilable differences.

The recent one most remembered must be his short stinct as Minister in the PM's Department in charge of judiciary. It happened somometimes in the 90s when Zaid was the Manager for the Persatuan Bolasepak Kelantan.

One blog commentator by the name Borhan told of Zaid quiting the Vice President of Majlis Kesatuan Siswaa, ITM post, which he won in a student election, when his ideas were not received and he has no means of attaining his ideas.

All this does not really matter. This posting is not about shooting Zaid. All was done in the judges compensation issue. It is a case of Zaid has yet to find a home for his ideals to flourish. If Zaid leave, it will be another missed opportunity for a positive national political evolution.

As my friend Aspan Alias described the situation, the problem is created by Azmin Ali's jealousy and seige mentality. If only Anwar can be awaken, Azmin's endless politicking will eventually make life easy for UMNO.

In his press statement Zaid explained that he joined PKR with no political ambition but with an objective to develop a common platform between PAS, PKR and DAP to infuse a clearly defined policies and create a united leadership.

In other word, Zaid wanted to create an alternative to Barisan Nasional from this three ideologically opposing parties. A two party system would certainly be a political development for Malaysia in its practise of the Westminister system of democrasy.

For his own reasons from his own observation, my blogger compatriot Syed Akbar feels Zaid's attempt is a futile effort. He is perhaps sick, as I am, with the manner the opposition is going about with their BN bashing.

But I was am a bit more hopeful.

Yes, I - the blogger described by The Malaysian Insider as right winger and a new converted reader as ultra - have a glimpse of hope that Zaid - a person I bashed to pieces when he was "justice" Minister - will be the person realising the dream of a two party political existence.

My basis is simple.

With the existence of a two party system, Malaysian will have a choice between the two. This could evolve positively in the long run into a common direction for the nation.

I was aware of what Zaid was attempting. Without devulging the content of negotiating process going on, which I am privy to part of it, I was hopeful that Zaid will succeed. Bearing in mind, my support will remain with UMNO (particularly, with the transformation process proceeding well).

My believe is that in the process of horse trading between the players in the so-called Pakatan Rakyat, they will evolve into another clone or a better version of Barisan Nasional.

What failed the Angkatan Perpaduan Ummah and Barisan Alternatif in the past was ego. There was reluctance to create another Barisan Nasional. The political argument against it then was why go for the clone when you have the choice of the original.

The difference would not be too ideologically different like Democrats and Republicans in the US. Their existence of such system will help to develop both parties into a more progressive existence.

Why would I, a BN supporter want another BN created to compete with BN?

The answer is also quite simple.

So that Malaysian do not have to be torn apart by idelogical differences. Essentially, the Constitution and Rukunegara should be sufficient as the guiding ideology of the country, if not for selective interpretations by certain political parties. Surely BN is not guilty la ...

The electoral process should be about selecting between which party can make better Government? The one between the two with a better solution to the problem of the day is entitled for the votes. To be considered, who sell a better vision or dream for of the nation.

It will change the current political situation. Now, for an UMNO loyalist to vote PR, it is like converting out of one's own religion. They will not vote out UMNO or BN, even if it was Al Capone that is running for office. The converse holds true for PR loyalists.

I tend to believe that a two party system is good for UMNO too. It makes them work harder, be true to their struggle, and keep them on track. After all, what's wrong with a good competition and meritocrasy.

This way no 'seige mentality' will arise that Malays will lose everything and Singaporeans will flood Malaysia by voting Pakatan. It doesn't take many years for Malaysians to kick them out if they do something stupid.

Hopefully there will be a lot of bipartisan initiatives and joint committees. Less politicking and more working.

If Pakatan leaders, particularly among the old hardcore like Lim Kit Siang, Karpal Singh, Nik Aziz, etc. can realise that no party can assume control of the nation with their ideology taking dominance, they will be more realistic.

There must realise that no party can control the country without the Malay majority support. The same holds true for the non Malay minority.

Though Malays have begin to vote oppositions and they could vote opposition again, it takes more than just anger to sustain that vote away from UMNO. Jaga hati Melayu.

Till social and economic disparity does not exist anymore on racial lines, ideologies and multiracialism are wet dreams.

Though he had short stinct as Minister, he spent millions of public money to pay diner for Bar Council (Anti-Government) and paid "ex-gratia" to sacked judges including "haprak" Salleh Abas. We should know that those sacked judges enjoying gratuity & pension as courtesy from TDM's Administration (we should respect TDM for this) and we wonder on what ground that they were paid again in the name of "ex-gratia". This clearly misuse of of public money to gain personal credential (Zaid). He is as stupid as Abdullah Badawi.

There is already a party that fit all your attribuites, PKR -Parti Keadilan Rakyat, that in 2008 if they contest all the seats, they may have even now be in Putra Jaya, unfortunately they want to be a Pakatan and Pakatan is just like a kongsi gelap pact.

What the hell?
While you're at it why not don a Bagan Binang BN vest as well.

I like your posting bro very politically sensible and practical, like you I am all for two party system. It makes for a stable Malaysia socially and economically.

Zaid had a calling to reform or revive the judiciary

But instead he was used by Pak Lah for his own selfish interest to shame Dr Mahathir and preserve himself.