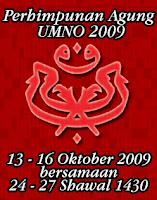 The Malaysian Insider reported Khairy seeking in his key note speech at the Pemuda UMNO Assembly for Malay to end seige mentality or in his exact words rasa diserang.

Is he indenial to the vocarious attacks Malays are under now?

It is one thing to be embrasive and fair to the other races but it is something else to claim Malay and Sabah and Sarawak Bumiputera have no special rights under the COnstitution.

Now that Khairy made open his stand on Malays and Bumiputera Special Rights, does that mean he is on the side of opposition critics who keep labeling UMNO and nationalist as racist everytime the mere mention of constitutional rights of the Malays are defended?

How do one relate Khairy's claim to continue with the Malay Agenda when he is an apologist to the other not legally justified left leaning and critical point of views?

It shows his Oxford pedigree is mere geometry set. Khairy has lost his soul as a Malay and does not deserve the Ketua Pemuda UMNO post.

By Adib Zalkapli
The Malaysian Insiders

He said instead that “it is the performance and achievements of Malays that will determine if we are” special or extraordinary.

“My dream is to one day see local institutions of higher education filled with Malays not because of quotas, but because Malays are there based on merit.

“Whilst we protect the quotas now, let us not forget that they are only supposed to aid us, and not be a lifeline for the Malays unto perpetuity. The Malay vision is not about defending quotas indefinitely, but to stand proud seeing Malays succeed on their own strengths.”

In his first policy speech as Umno Youth Chief, Khairy said Umno should move beyond the comfort zones of a communal party perspective.

He also appeared to be stopping the wing’s practice of pushing the party to the far right, adding that the Malay nationalist party cannot afford to be ideologically inconsistent.

“We are now at a crossroads of our cause, where we can choose to remain on the same path with the same style and methods.

“We can continue with the chest-thumping rhetoric, warning other races never to challenge this or that,” said Khairy to some 800 Umno Youth delegates.

“This option is easy, and may promise a measure of popularity within the party. But, we must ask ourselves, is this what Malaysians — Malays included — really want from Umno,” he added.

Khairy who won the Youth chief contest despite facing two opponents who were campaigning for Umno to be more exclusive, also told the wing’s delegates to embrace Datuk Seri Najib Razak’s message of unity.

“In this new context, do we want the President to speak about a transformation — removing barriers between races and communities — whilst Umno Youth stubbornly refuses to change, and instead, continues to voice something different from the President?” asked Khairy.

However Khairy said that Umno Youth will not abandon the Malay agenda but at the same time will assume the responsibility of leading other races too.

“Some may wonder if we should fight for other communities if they question our position as Malays. It is here that our leadership credentials will be tested,” he said.

“As the group of people given the responsibility and privilege to lead, Malays cannot simply follow the common beat — that would not be leadership. Instead, as leaders, Malays must rise above and go the extra mile,” he said.

He also called on Umno Youth leaders to get rid of their siege mentality and to look beyond Article 153 of the Federal Constitution that guarantees the special position of the Malays, adding that it is almost impossible to remove the constitutional provision.

“I speak of a generational challenge because for too long, Malays and Umno have been caught in a mindset that is negative and overly defensive,” said Khairy.

“We feel as though we are constantly under siege, and all our efforts appear to be channelled towards protecting the Malay special position. I urge Malays, beginning with the youth, to get out of this siege mentality,” he said.

Cynically speaking, Khairy is avoiding being under seige. As one former Group Editor of a major newspaper group text me, Khairy is under seige with his money politics conviction.

His statement could be interpreted as Khairy extending an ideological lifeline to PKR to receive him. Khairy has been attempting to win the heart of Pemuda grassroot but to no avail. It is a foregone conclusion that Khairy is a liability to the party.

The embrasive policy with Singapore by his father in law and believed himself to have a role has led to strategic compromises in security, commerce, and territory.

One example is Iskandar Development Region (IDR). The project claimed by Tun Abdullah Ahmad Badawi as "his idea" but was actually conceived by Dr Vincent Lim and Dato Zaki Zahid had actually placed Johor and the nation playing second fiddle to Singapore.

It willingly invited Singapore to benefit while Johor only could savour the bread crumbs and bone soups.

It is the self realisation that arise from seige mentality among the critics that was the resolve to continue the fight against the Johor Corridor. That corridor is now a scam, sham and shame that could cost UMNO Johor votes in the next general election.

After more than two years, it has yet to show any progress but an overstaff and overpaid organisation, hundred of million of unnecessary spending of consultancy fees, and miles thick of studies with no prospect of implementation. Contracts for infrastructure building are overpriced.

Investors are pulling out. In a matter of time, IRDA would be changing praying direction from Mecca to Singapore and willing to give in to every Singapore's demand.

All this becasue some group of simplistic young punk devoid of any sense of history insisted and inflenced slumberjack for the past five years to end our seige mentality. Slowly the country is being sold lock, stock and barrel to Singapore and Western strategic interest.

What say you, A Voice?

Salam A Voice aka Din,

Wah!!!. UMNO controls the banks, the armed forces, the police, the judiciary, parliament and the F;[',./' government. Yet UMNO thinks the Malays are still not safe in Malaysia.

A day may come when some Malaysians think it is time to go beyond the polls to stop UMNO. Look at Iraq, the Shites are firmly in control of the government with the backing of 100,000 US troops. Do we have peace in Iraq? It only took less than 30% of the population aided by foreign and local sympathizers to turn Iraq into hell on earth for everyone in the country. Khairy is a lot smarter than you UMNO dolts. Why do you think Mahathir dislikes him?

Ha ha Piggy's back to siege the son-out-law, and this time around I have better ammo.

Khairy has spoken at UMNO assembly ... so what? Thanks to his public speaking skill, I would say 304% confidence and 0% substance.

No wonder KJ introduced the five pillars and one of them is "relevant", the true fact is that KJ has been sidelined.

Are you threatening arms revolt? Over my dead body shd anyone bring about chaos in Malaysia.

KJ is smart but he is a forreign stooge. The one that support the 30% Iraqi to bring the country down to its knees.

'Are you threatening arms revolt? Over my dead body shd anyone bring about chaos in Malaysia.'

First Anwar is a foreign stooge. now it is Khairy. Who is next? Do you not see echos of Saddam's rule here. Internal divisions can be easily exploited by foreign powers to bring down a country. Go to UM and ask any expert on history to enlighten you clowns here. Make sure this expert is a Malay.

So where is the cause of these so-called 'arms revolt' of yours? UMNO? Yes, indeed. it will also be over your dead body and mine too. Judging by the history of countries with Muslim majorities invariably the people who take up arms against the government are usually the Muslims themselves. However, I do not intend to die for people who treat me as second class citizens and call me animal names on top of being 'pendatangs'. UMNO wants to be a racist hero then fight your own wars.

Lest you think foreign powers do not eye Malaysia. Look and the Straits of Malacca and tell me what you see.

Orang sabah ... what do you expect.

"...It is one thing to be embrasive [embarrasing?] and fair to the other races but it is something else to claim Malay and Sabah and Sarawak Bumiputera have no special rights under the COnstitution. ..."

You must be joking ler about UMNO's protective and sexy stance on Bumiputera special rights. Or any of it's crony sidekick parties like the PBB Sarawak.

Bidayuh Dayaks in Bengoh Sarawak will be deprived of their NCR land when a dam is built over their old homestead. 3,000 ha have been alienated for them to live and sit on. That's great. Of course anybody would be if you're sitting on your own new property. But no! This resettlement land has been leased to a company, with a paid up capital of RM2.00 and Alfred Jabu, a Dayak is one of the Directors. A Dayak cheating a Dayak just as a Melayu cheating a Melayu! Who needs the bloody Chinese and Klings?!!!

You'd be scarecrow if you ain't know who owns the Company that'll build the darn damn!!!

Go patch up your wall, lah! It's got a big hole!

My walls is not perfect coz I cannot know everything if that is what you demand of me.

You have to start having seige mentality and fight foor you rights.

You have to let people know of your problem. Get organised. Persistant.

If your land will have to be sacrificed for national development, then fight for a fair compensation. Land exchaneg for land.

Thats exactly what I am saying. That is your constitutional special rights. You have to fight for it.

This is the inconsistency. There will be opposition and activist who will fight for your constitutional special rights (Off course they will never mentioned about it) but not my constitutional righst as a malay.

For you to complain agst UMNO, remember that the Sabahan and Sarawakians basically want to be politically autonamous. Your battlefield is in Sarawak.

Just as I said to my Sabahan friends (which they still disagree but want to blame Semenanjung) you can't keep blaming others but yourself for not doing anything.

"...You have to start having seige mentality and fight foor you rights.

You have to let people know of your problem. Get organised. Persistant.
..."

Wow! We in Sarawak never had any seige or seizures. If we do you're the first orang Malaya who's told us!

Hey! Thanks Man! Orang Malaya do have tamaddun after all!

We'll let you know when we throw our cawats away. We'll need new pants. You might want to sell us some. Just make sure your price is good!

Did I made of Sarawakian in cawat? What do I care what your traditional wears are?

You are overly sensitive and too cynical that you lose the point of good intention.

That problem lies in your heart and no one can change except yourself.

That got to nothing to do with whether you are a Bidayuh or Melayu or whatever categorisation we compartmentalise ourselves.

you have to disregard whatever comes out of kj's mouth

he knows he is on the way out, just hope his marriage with Nori will last