UMNO should use attack as the best defense

The great Vince Lombardi did say that offense is the best defense and UMNO's campaign in Bagan Pinang should be on a massive offensive.

PAS continue to falter on their ceramah as number of attendee dwindled further causing more ceramah cancelled last night. Neither is the walkabout by PAS candidate getting the reception on the ground.

Is the locals getting tired of outsiders coming to talk endlessly of politics? Or could it be calm before the storm? And, not to discount the possibility that PAS could be giving up?

The situation now is actually a nervous one for both sides. The voters can be categorically divided by race - Malay, Chinese and Indian; army or civilian; and new or old voters.

PAS are hoping the non Malays could throw votes on their side, Malay votes split half and try to gain ground on postal votes. Hopefully with much uproar made with Salahuddin Ayub doing a stunt to file a suit in court could gain some courage from some army members to vote opposition. 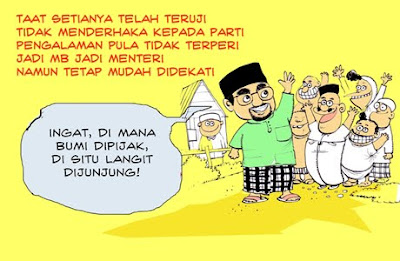 Tan Sri Isa Samad is doing very well with his walkabout and the focused small ceramah prove to be effective. They are quite confident of getting non Malay votes and the postal army votes is as good as in the bag.

However, their area of concern is the 45% younger group. Isa have to pull something out of the hat to be seen relevent to this group. Could he hope on teh Pemuda or Puteri to assist him?

The UMNO machinery seems to be high in confidence but the fear is complacency could set in. Last night, UMNO cancelled all its ceramah.

On the issues, UMNO is still under attack on issues of corruption. Thus far, they have been rather defensive. It is timely to be offensive in view of the retreating PAS.

UMNO may have a problem of believability to deny of corruption charges but they should not be fearful to pound back on the corruption happenings and the indecisiveness and inability of Pakatan States.

Pakatan is expected to be attacking back with a poster and pamphlet war. If mountain not coming to moon, then the moon is going to mountain.

Words heard today is saying that with PAS's campaign faltering, PKR is taking over. They are expected to be aggresive and personal.

It is immaterial if there could be backlash from aggresive attacking of Isa. Their intention is not to win anymore but is for thge long haul and to prepare the ring for the arrival of Anwar on 9th and 10th.

It is said in the local PAS circle that candidate Zulkifli was not a local choice but that of Anwar's. The one holding the campaign purse will be the one calling the shot in candidate.

Salam,
You mentioned that UMNO should go on offensive - if that is the case, I wonder if UMNO can lodge report to EC and stop Anwar or anyone from PKR & DAP from giving their ceramah at Bagan Pinang. Rules stated that only parties that contesting the by-election can campaign at Bagan Pinang and EC had previously asked PKR's & DAP's banners to be removed from there. I wonder if it is against the rule if those people from PKR & DAP gives their ceramah there since they are not PAS members nor its agents? I know they will be making a lot of noise about freedom of speech blah blah blah.. but we can always point that it is their fault for failure to register PR as a coalition party. That failure is without shadow of doubt - a testimonial of how insincere their leaders are.